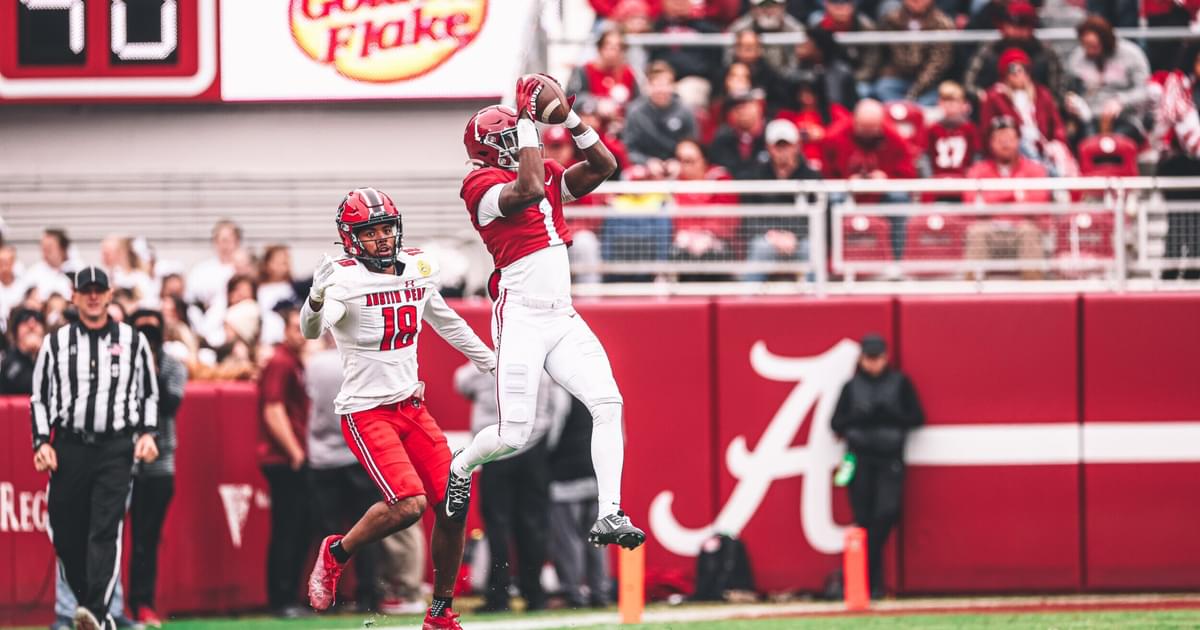 An early kick off on a cold day against an FCS opponent with no chance of playing in the SEC title game and little to no chance of making the playoffs. Saturday’s game had all the ingredients to be a sloppy one, and that’s exactly what Alabama fans got to do Saturday with a 34-0 win over Austin Peay.

The advertised attendance at Bryant Denny Stadium was 99,639, but at kick-off it appeared to be 75% full as both fans and players lacked energy. Despite the sloppy play and lack of energy, there were some bright spots in the game.

Here are some key takeaways from the game.

Defensive linemen Kool-Aid McKinstry and Brian Branch both had interceptions, and defensive lineman Damon Payne recovered from a fumble. Another positive is that the defense had opportunities to force more turnovers as both Will Anderson, Jr. and Deontae Lawson both had pick six chances that were dropped. Despite the three forced fumbles, Alabama couldn’t improve their -5 turnover lead as they also turned the ball over three times, taking the turnover lead for the game to zero.

After Jahmyr Gibbs struggled with a twisted ankle, Alabama turned to junior running back Jase McClellan to handle running back duties, and he used his opportunity to play the best game of his career so far. McClellan ran for 100 yards for the first time in his career, and it wasn’t long before he got there and broke the century mark in the second quarter. He had 136 yards and a touchdown at halftime and finished the game with two touchdowns and a career-best 156 rushing yards. Bama fans would love to see Jahmyr Gibbs return for the Iron Bowl, but if he still can’t go there’s relief that McClellan can get the job done.

Georgia transferee Jermaine Burton also had a career game that eclipsed the century mark when he received yards for the first time in a Crimson Tide uniform. Burton led Alabama with seven catches for 128 yards, both of which were season highs for the transferee. Burton also grabbed both of Bryce Young’s touchdown passes as well as a 50-yard catch that was the team’s most explosive play of the game. With his big game against Austin Peay, Burton surpassed his results from last year in Georgia. It seems Burton is finally realizing his potential in the last two games and hopefully can continue the momentum into next Saturday’s Iron Bowl. Burton is draft-eligible after the season but has two more years at Alabama if he decides to return. Despite the improvement he’s shown this year, it might be wise for him to return to Alabama for at least one more season to increase his draft stash.

The Alabama defensive line had yet another inconsistent outing. Surprisingly, against fewer competitors, there was little to no pass rush, ending the game with zero sacks and only two quarterback rushes, largely due to how quickly Austin Peay got rid of the football. However, the defensive line unit did a great job against one of FCS’ best rushing attacks, limiting Austin Peay’s groundplay to just 59 rushing yards, averaging just 2.4 yards per carry.

The Alabama secondary took a little time to wake up, but overall they did a pretty better than average job against Austin Peay’s passing attack on Saturday, keeping them past by just 147 yards. In the first half, the Governors were able to drive the field down by spreading Alabama and running a quick offense, but failed fourth down conversions and a missed field goal kept them off the scoreboard. The Alabama secondary was responsible for the Crimson Tide’s second multi-turnover game of the season as both Kool-Aid McKinstry and Brian Branch recorded their first interceptions of the season. Branch also led the tide secondary with eight tackles and a tackle for loss in a big hit against an Austin Peay receiver. Eli Ricks was pulled out of the game with a head injury and Terrion Arnold had to step in on defence. Arnold seems to have the size and talent to play defensively for Nick Saban but doesn’t seem to have grasped the coverage schemes yet. Until he does, his game will continue to be inconsistent.