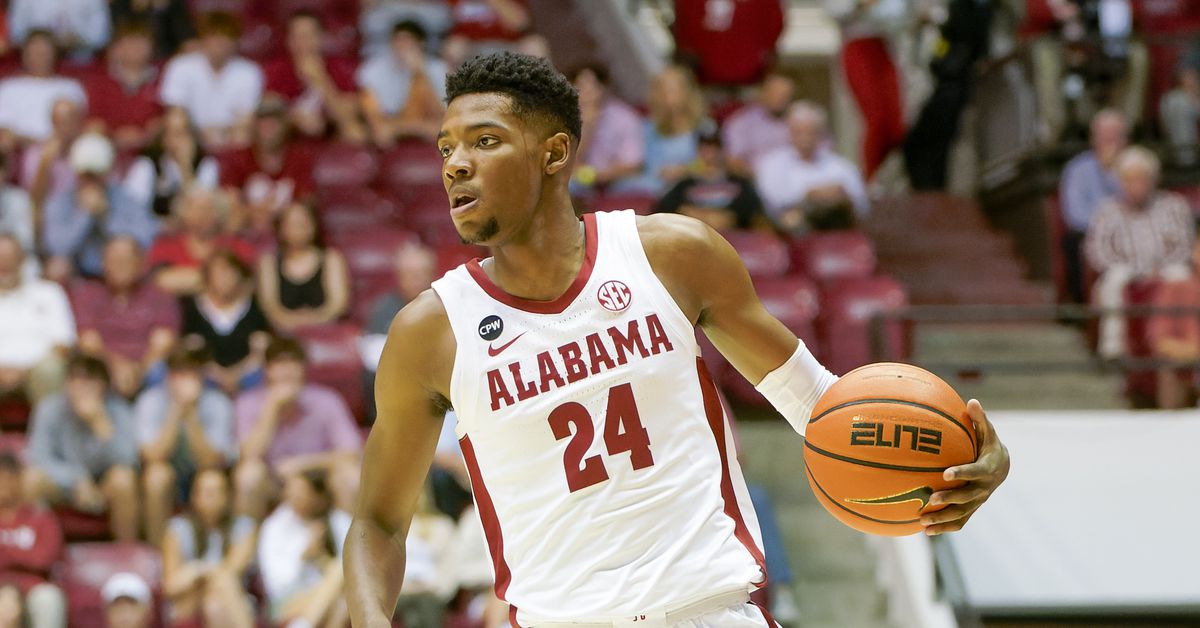 The Alabama Crimson Tide improved their fresh-season 4-0 with a dominant 104-62 win over the Jacksonville State Gamecocks on Friday night. Freshman superstar Brandon Miller leads the way with big assists from Mark Sears, Nimari Burnett and Noah Clowney. Miller, Sears, Burnett and Clowney were added to the starting lineup by Charles Bediako.

The Tide started hot with Miller and Burnett hitting early three-point shots, but JSU came out firing and blasted out the lights to start the game. The Gamecocks held a 24-19 lead when Sears and Burnett fired back-to-back from long range and the tide was gone and running, never to drag again. At halftime, Bama held a 51-39 lead and Sears had brought up 16 points, helped by four marks from afar.

In the second half, Jaden Bradley replaced Bediako with the top five. Bama came out, fired from all guns and quickly put the game away. Burnett and Miller traded three point marks and were helped by Jahvon Quinerly, who scored his first points of the season with two shots from long range that wrapped around a follow-and-slam from Miller.

By the time Miller finally got down to earth he had scored 20 points in the first nine minutes of the second half and the Tide held an 84-53 lead. Burnett heated up and had his best game of his career in Alabama. Clowney snagged every rebound in sight and the Tide defense hit hard on JSU after the break. With just two minutes left, Coach Nate Oats emptied the bench and Bama led 93-55. Jaden Quinerly, Jahvon’s little brother, took the Tide to the century mark with a banked free throw with 1:31 of the game. Adam Cottrell made a steal and went the length of the court for a shot, and Delaney Heard landed a jump shot for the last shot of the tide. The Gamecocks hit the 60 mark with four last-minute free throws.

Individually, Miller continued the amazing start to his Bama career with 28 points in 9-12 shooting while scoring 7-9 from three-point range. Miller had eight rebounds, three assists and a block, all in just 25 minutes of action, and also took home the team’s Hard Hat Award for effort points. Sears shot 6-14 at 4-10 from deep for 18 points with three assists, a steal and a block. Burnett logged 23 minutes and threw in 18 points to 5-6 from a three-point range with four rebounds and a steal and block. Clowney continued the impressive start to his freshman campaign with eight points and a game-high 10 rebounds in 22 minutes. Rylan Griffen had nine points and six rebounds despite only shooting 2-9 in the game. Bradley filled the stat sheet in 20 minutes with seven points, six boards and five assists. Quinerly made 2-3 three-pointers and scored six points with a team-high eight assists in just 17 minutes.

Despite the cautious start, defense and rebound were outstanding again. Coupled with excellent shooting, this made this the Tide’s best all-around game of the young season. Although it seems like the football team has spent all season looking for “dogs,” this basketball team seems to be full of them. Clowney is a beast on the boards, Sears and Bradley are both brave tough players and Miller is simply a star. Returning with Quinerly in at least a limited role, leaving Dom Welch and Darius Miles as the final two players on the disabled list. Both wore boots on the bench tonight.

Competition will ramp up for The Tide heading to Portland, OR to play the Phil Knight Invitational over Thanksgiving. Bama draws Michigan State first and will play them Thursday night at 9:30 p.m. CT, with the TV network to be announced. Bama would next play either Oregon or UConn, depending on who wins and loses on Friday. The tournament ends on Sunday and Bama could face North Carolina or Villanova.