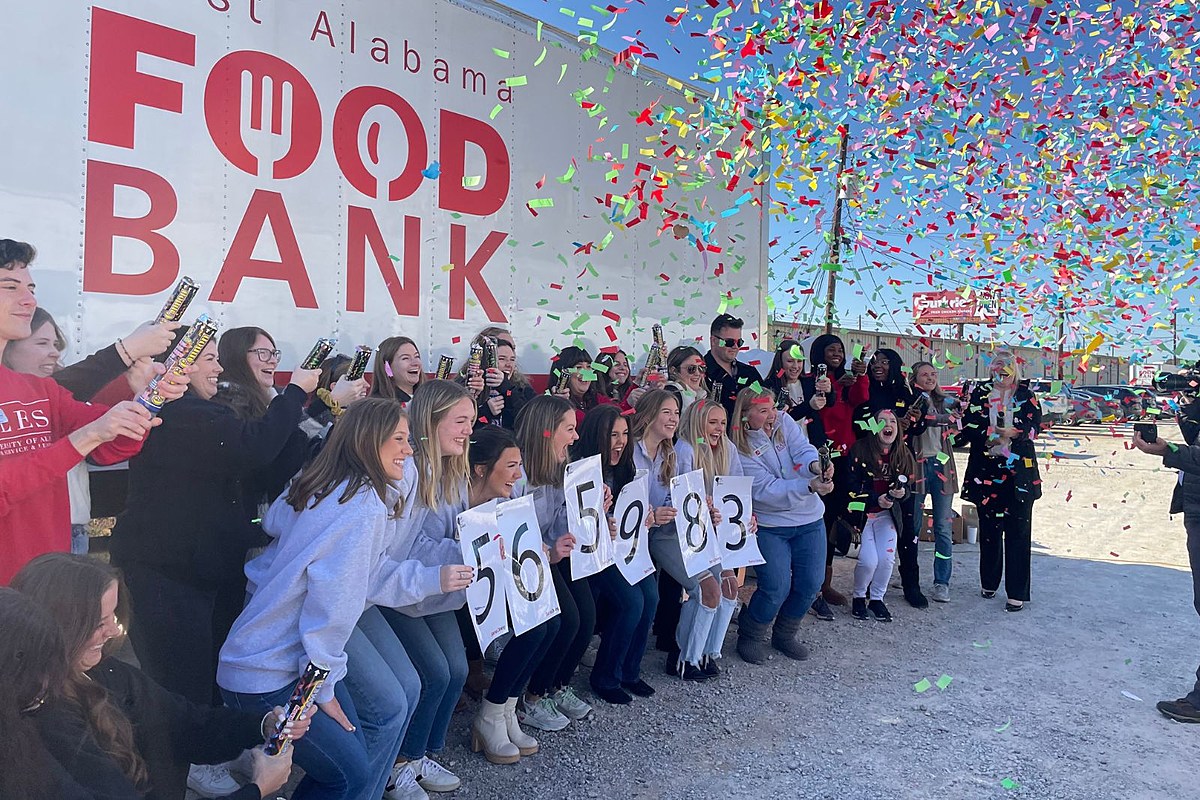 The University of Alabama raised more than half a million pounds of food to benefit the West Alabama Food Bank during its annual Beat Auburn Beat Hunger campaign.

The UA group celebrated at the Northport Food Bank on Friday morning when they learned the Capstone had raised 565,983 pounds of food this year, beating the Auburn University group who raised 516,611 pounds.

The annual competition, entering its 29th year, began on September 17th and ran through November 17th. Each team raised food and money in a friendly competition to benefit WAFB and the Food Bank of East Alabama to help address food insecurity in both communities.

West Alabama Food Bank CEO Jean Rykaczewski said the success of this year’s competition was due to an increase in participation from diverse groups throughout the community.

“We were worried about the economy and we didn’t know what was going to happen, but everyone really got involved and we saw more participation from different groups that really helped us this year,” Rykaczewski said.

Rykaczewski said the process of counting the numbers over the seven-week program made the group nervous, but they were looking forward to winning this year’s competition after falling short in the 2021 campaign.

“We watched the numbers for seven weeks to get in and out,” Rykaczewski said. “It’s nerve wracking but when we got the call that they also had £500,000 when we were usually in the 300s and 400s it was like ‘Oh my god but we’re really excited how that happened.’

Kate Graziano, president of UA’s BABH team, said it was amazing to have led the team that helped raise food this year.

“This is the most that either institution has ever raised and together we have been able to raise over 1,000,000 pounds of food for the state of Alabama,” Graziano said. “It’s really mind-blowing, but that’s my favorite part, seeing how it all comes together in the end. All the hard work, all the blood, sweat and tears, coming and dropping off food at the table, it’s all paid off.”

Graziano said the food collected would allow the local food bank to support families throughout the holiday season and beyond.

“It’s been a lot of time and a lot of dedication, but it’s been so worth it knowing that the board can benefit from what we’ve collected over the last seven weeks throughout the holiday season and into next spring,” Graziano said .

Graziano, a junior at the university who has been involved with BABH since her freshman year, said she’s excited to be part of a group that is making a big impact on the local community.

“It’s really amazing to know that the smallest things make a big impact,” Graziano said. “It doesn’t matter if you’re volunteering at the chalkboard for two hours or orchestrating a big food drive like this, knowing that you’re making such a big contribution to the community has added so much meaning and purpose to life and I think.” is something worthwhile that everyone should experience.”

16 of the top stories published by the Tuscaloosa Thread for the week of October 17, 2022.