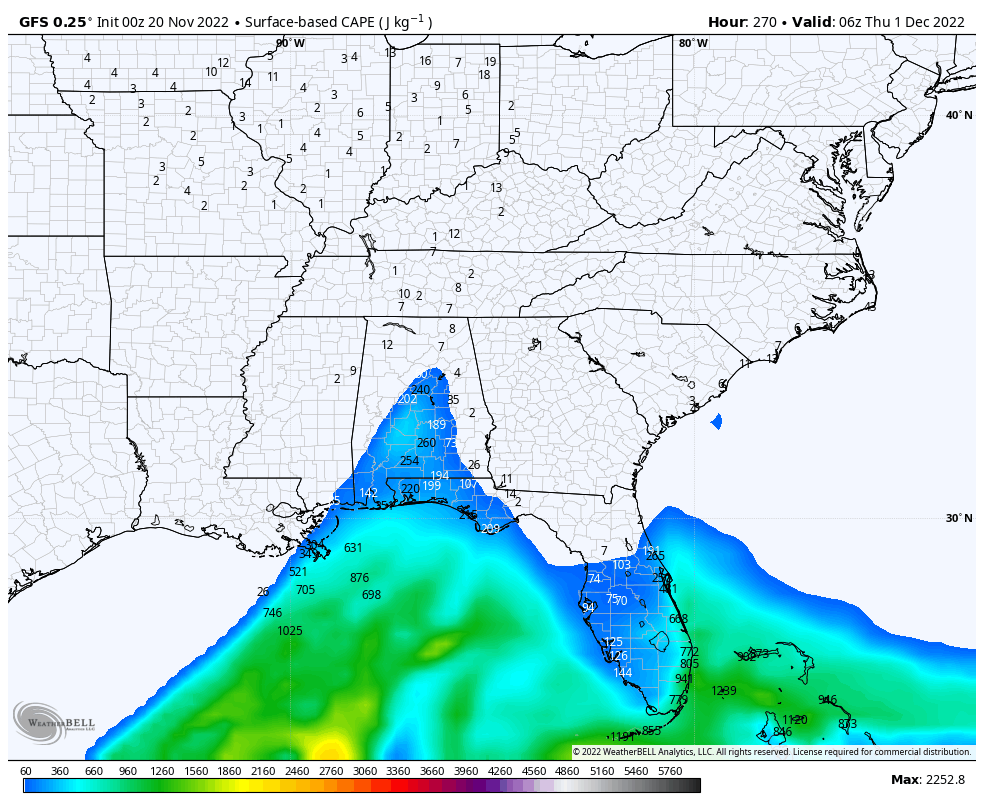 Saturday started out sunny in northern and central Alabama, but clouds quickly thickened as the day progressed. The rain stayed far to the south from a storm system moving across the Gulf of Mexico. High temperatures in our area included 49°F in Birmingham, 50°F in Tuscaloosa and 51°F in Anniston.

FOR YOUR SUNDAY: Temperatures this morning will be at or below freezing along and north of I-20, with 30 degrees in the south. We should see increasing sunshine as the morning progresses. Highs this afternoon will only be in the low 40s in the north, with mid and high 40s in central Alabama. Lows will drop back into the 20s over the northern half of the state tonight.

MONDAY: Tomorrow is expected to be sunny with warmer temperatures. The highs will be in the 50s across the board. A system will attempt to ramp up over the Gulf of Mexico by Monday night, which could bring a few showers…

TUESDAY: Showers are possible, primarily over east-central and southeast Alabama as this low takes shape and moves northeast. Any heavy rain and storms will be east of Alabama. Tuesday’s highs will be in the 50s under mostly cloudy skies.

WEDNESDAY: What is believed to be the busiest travel day of the year will appear relatively free of weather-related travel issues. There will be some snow over the northern Rocky Mountains and in Maine, but the rest of the country will see relatively nice weather. Of course, I think this is a very different Thanksgiving holiday week than it has ever been, with many school systems taking the full week off and trips starting a little earlier and possibly being more spread out this year. Here in Alabama, after a morning start in the high 30s to low 40s, Wednesday will feature partly to mostly sunny skies with highs near 60 degrees.

THANKSGIVING DAY: The day should bring increasing clouds for us as our next storm system takes shape to our west. Highs are in the low 60s after another morning in the low 40s. The rain should stay away from the northwestern parts of our state until late in the evening.

BLACK FRIDAY: On the big shopping day, there may be rain during the day, with rain likely on Friday evening. Highs are limited to the 50s.

IRON BOWL DAY: Saturday could be wet across much of the area including Tuscaloosa, site of the annual Iron Bowl tilt. It looks like rain is becoming increasingly likely on Saturday night, with a good level of soaking through Sunday. We could use the rain but it would be nice if it didn’t last until after the game. There’s a lot of uncertainty here in this part of the forecast, so stay tuned. 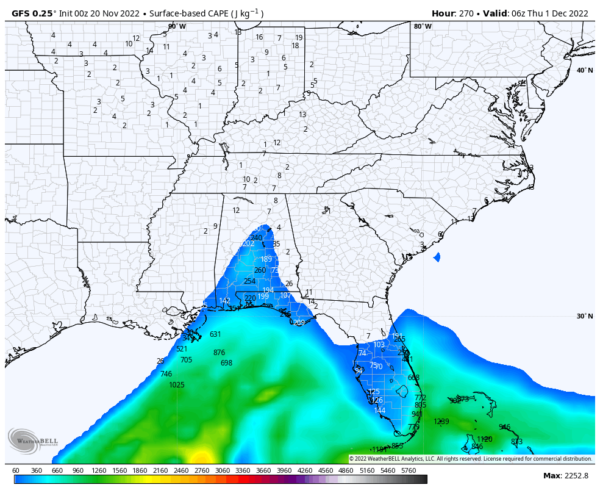 BACK TO WORK AND SCHOOL: The following week looks dry and cool through Wednesday night and Thursday when another cold front will bring some rain and possible storms. Severe weather is possible with this system if it holds together, as evidenced by the nightly run of the JRC in the chart above, which shows instability over south and south-central Alabama.

POTENTIAL LATE TROPICAL UNREST: There are some indications that a tropical depression could form over the Caribbean Sea around November 29th in the second week of the forecast. It shouldn’t be a threat to the US, but we’ll be watching.

BEACHCAST: Some people are enjoying their turkey and dressing on the beach, and while the weather won’t be great this holiday week, it won’t be bad either. The showers shifted offshore early this morning and today conditions will be mostly cloudy but dry along the beautiful beaches of Alabama and Northwest Florida. A few showers may hit the eastern Panhandle beaches late Tuesday through Wednesday as low pressure attempts to rotate along the southeast coast. The showers are returning on Friday evening and Saturday is looking wet. Expect better conditions by Sunday. Highs are in the 50s today, in the 60s on Monday and Tuesday, and in the 70s on Wednesday and Thursday. 60s are the norm from Friday the following week. Lows will be in the 30s tonight and then the 40s will be common for much of the next 5-7 nights.

DANCING WITH THE STATISTICS: 17.2 snow niches were recorded at Buffalo NY Airport for the 24 hours ended Saturday at 7am. The old record was 7.6 inches. Another 5 inches of snow fell on that record amount in just one hour on Saturday night. The lake-effect snow event that began Friday dumped 77 inches of snow on Orchard Park NY in 24 hours.

WEATHERBRAINS: This week’s panel will be entertaining some folks from Climavision, a company working to fill in some of those infamous radar holes around the country. Like the one that exists across west-central Alabama and east Mississippi. Check out the show at www.WeatherBrains.com. You can also subscribe to iTunes. You can watch the show live at live.bigbrainsmedia.com or on James’ YouTube channel. You can catch the show on James Spann’s 24×7 weather channel via cable or directly over the air on the dot 2 feed.

ON THIS DATE IN 1274: Kublai Khan was thwarted not once but twice in his desire to invade Japan, both times by a typhoon. The first of these kamikaze, or “divine winds,” occurred on this date. Follow my weather history tweets on Twitter. I’m @wxhistorian at Twitter.com.