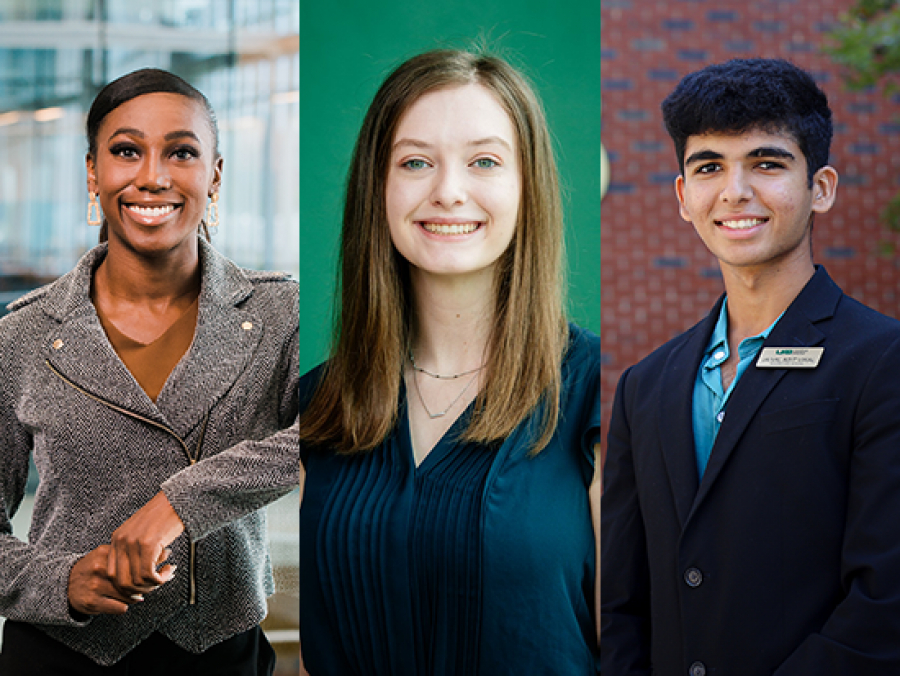 The Inno Under 25 list recognizes top founders, entrepreneurs, innovators and leaders in Birmingham under the age of 25.

To select the nominees, Alabama Inno reviewed past BBJ coverage and sought recommendations from the region’s startup community. Only six recipients were included in this year’s list.

“Healthy communities invest heavily in the younger generation in many ways, and this is the best strategy for long-term social and economic success,” said Patrick J. Murphy, Ph.D., Goodrich Chair and a professor at the J. Frank Barefield Jr. Entrepreneurship Program. “UAB’s Entrepreneurship program has become a magnet for entrepreneurial talent from around the world, including some of the best young entrepreneurs I’ve ever met. To see you celebrated in such a prestigious way as a BBJ Inno Under 25 winner shows me that our community is vital and resilient.”

A graduate of Collat ​​School of Business in both the undergraduate and MBA programs, Green is a former track and field athlete and is currently employed at UAB as the program manager of the award-winning J. Frank Barefield Entrepreneurship program. Her entrepreneurial interests began with her family’s involvement in the service and real estate industries, furthered over the years by her exposure to entrepreneurs.

“I’m an entrepreneur at heart and soul, and I love serving others,” said Green. “Being named Inno Under 25 means a lot to me. It’s a very unexpected award, but it shows that I’m representing my family and my university by making a difference in the Birmingham community.”

Green credits her success to her family and to the mentorship of Murphy. According to her, her career choice is not guided by job titles but by the impact it would have on the community.

Katie Lovelady
Photography: Steve Wood“UAB has enabled me to make a difference, first through my experiences as a track and field athlete and now as the program manager of an emerging top program called,” said Green. “We are making a significant impact and I am inspired to do this work with a strong ‘think global, act local’ mentality that is making a difference right here in Birmingham. Go on, blazers!”

Lovelady is an Industrial Sales major with a focus on medical supplies and equipment. She currently works as a Business Development Specialist at a biotech startup called CerFlux, where she builds and maintains relationships with industry partners. At 16, she co-founded a women’s clothing boutique called Forever Kate. At UAB she is also involved in public health projects with the Sparkman Center for Global Health.

“Being named Inno Under 25 meant the world to me,” said Lovelady. “It validates that the work we do matters to our businesses and community, even though the recipients are young. Thank you to those who nominated me and the Birmingham Business Journal.”

Lovelady attributes this success to the networking and mentoring opportunities available to her in the entrepreneurship program.

“UAB has played a critical role in developing Alabama’s startup community and providing a unique experience,” said Lovelady. “They do a great job of matching students with internships at startups, which gives a student an immense amount of experience.”

Jaival Vikal
Photography: Jaival VikalVikal is an international student from Ahmedabad, India studying Computer Science and Entrepreneurship. His entrepreneurial interests began when he was a teenager and he is the founder and CEO of two sports companies in India. He recently presented the idea of ​​developing a new beverage called Genesis Hydration at the National CEO Conference in Chicago.

“This is one of the first and fastest milestones I’ve achieved in just 14 months in the US,” said Vikal. “None of this would have been possible without the support of UAB Entrepreneurship. Being exposed to top-notch training like this has allowed me to learn more skills by getting the perfect exposure to apply them.”

Vikal credits his success to his decision to come to the United States to pursue an education at UAB, his friends, and the support he has received in all UAB departments, including INTO UAB, UAB Dining, and University Recreation.

“The greatest support I have received comes from UAB Entrepreneurship and Dr. Murphy, who changed my approach to entrepreneurship in just one class,” Vikal said. “It’s hard to adjust when you’re alone, thousands of miles from your family. UAB welcomed me wholeheartedly with the support of all these people; UAB feels like my second home.”