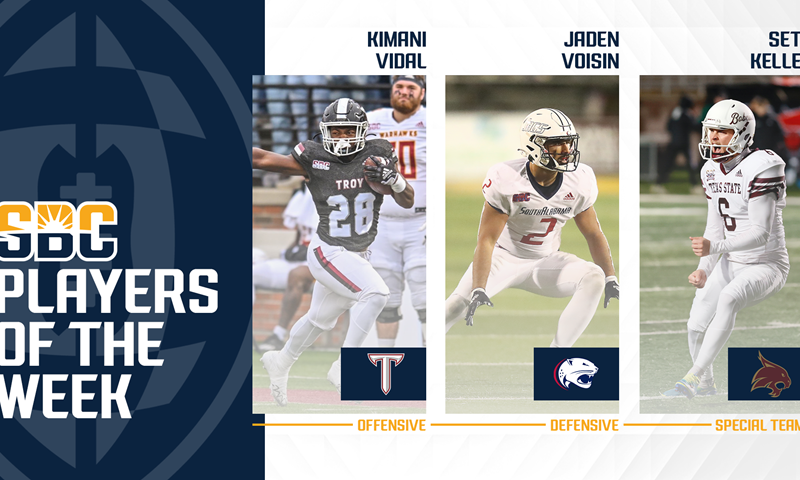 Soccer Offensive Player of the Week

Kimani Vidal, Trojans running back sophomore, came with two yards history when he rushed for 242 yards and two touchdowns in Troy’s eighth straight win, a 34-16 win over ULM. The Marietta, Georgia native finished two yards behind the Trojans’ single-game record set by Eddie Brundidge in 1986, though his 242 yards is the ninth-highest in an FBS game this season and 20th in Sun Belt history. Behind Vidal’s career day, Troy continues to control his own destiny to achieve his first Sun Belt Football Championship appearance since the game’s inception in 2018.

Football Defensive Player of the Week

Jaguars sophomore Jaden Voisin hit a career-high 17 tackles as South Alabama beat the Southern Miss (27-20) for the third straight season. The Crestview, Fla. native also added 1.5 tackles for losses and an interception, which he returned for 14 yards. Voisin’s performance helped South Alabama maintain first place in the Sun Belt West division with Troy heading into the final weekend of the regular season. His twin brother Devin paced the Jaguars with 97 yards and a touchdown catch on offense.

Bobcats redshirt junior kicker Seth Keller hit a season-best with three field goals — including the winner with two seconds remaining — to lead Texas State to a 16-13 comeback win over Arkansas State. The Colleyville, Texas product accounted for 10 of 16 points for the Bobcats, including following up on a career-long 49-yard field goal in the fourth quarter. The 29-yard field goal was a moment of redemption for Keller, who missed a 38-yard attempt in the dying seconds of a one-point loss to ULM on Nov. 5. He sits just one field goal, which is missing the program’s all-time career record.