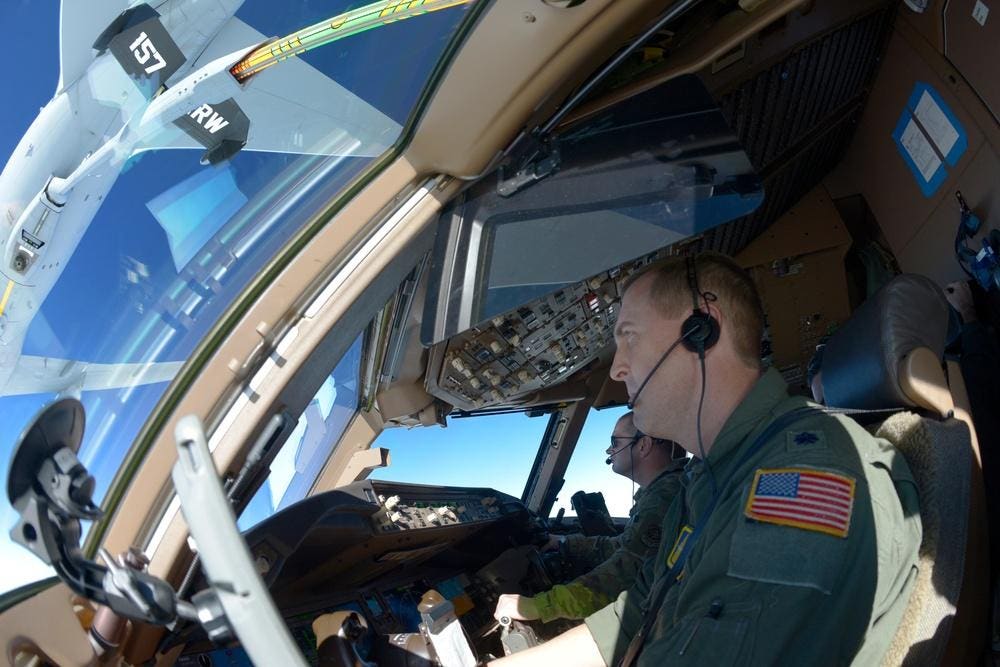 A crew led by Lt. Col. Greg Van Splunder and Lt. Col. Brandon Stock, pilots with the 157th Air Refueling Squadron, took off in their KC-46A Pegasus on Wednesday morning. They landed 36 hours later after flying 26,000 miles non-stop, demonstrating that the USAF’s newest tankers can deliver plenty of fuel to thirsty fighters over the Pacific, although they won’t replace the aging KC-135s on a one-for-one basis.

“This expanded mission,” Minihan said in an Air Force news release, “is another example of capable airmen taking command and moving out to expedite our deployment of the KC-46A.” This Total Force mission boldly underscores the need to think differently, change the way we do business, and offer options to the Joint Force.”

The need arises from the reality, confirmed by recent reports, that the Air Force faces an in-flight refueling capacity gap through the mid-2020s as it is phasing out old KC-10 and KC-135 tankers faster than the KC can be replaced -46A or another successor tanker. The Air Force expects to purchase at least 179 KC-46 airframes for $4.9 billion. They will not fully replace the 398 KC-135s that the USAF currently uses for aerial refueling alongside 38 to 40 KC-10s. In fact, they will only make up 40% of that force.

The mission, which will be flown from the 157th ARW’s home base at Pease Air National Guard Base in New Hampshire, follows another Pegasus capability demo in which just two crew members (a pilot and a boom operator) fly a KC-46 flew a full air refueling mission from takeoff to rendezvous for refueling, which was operating out of McConnell Air Force Base in Kansas late last month.

AMC said the mission was flown to validate procedures for flying “with a limited crew for certain potential high-end combat scenarios.” In fact, it showed that two crew members could quickly take a KC-46 off the ground where it is vulnerable (at bases in the Indo-Pacific) to Chinese missile threats and do something useful with it. The recent Marathon mission could be seen in the same context, as a flying KC-46 is harder to hit than one parked on the ramp.

The 36 hours in the air also represents potential “good news” for the Air Force after it was recently announced that a Pegasus en route from Glasgow Prestwick Airport in Scotland to Joint Base McGuire-Dix-Lakehurst, New Jersey, had crashed Refueling an F-15 Eagle. Its refueling boom violently separated from the Eagle and rebounded into the KC-46, resulting in $2.5 million in damage to the tanker.

The damage could have been due to “stiff boom” problems related to several design flaws of the KC-46 boom, which the Air Force cited in 2018. It also occurred two months after the boom retraction cable ruptured on a New Hampshire Air National Guard KC-46. to force the plane to land with the apparatus extended.

The KC-46’s ability to stay airborne for such a long time is made possible by its own ability to be refueled in flight. During the record-breaking mission, the Pegasus itself was refueled three times by other KC-46s. The 157th crew, in turn, refueled F-22s over a Pacific theater of operations.

The long-range mission was not the first for the KC-46. Other crews have previously flown 22- and 24-hour missions, demonstrating what Lt. Col. Joshua Renfro, leader of the AMC KC-46A cross-functional team, as “a deliberate approach to expanding the scope of the KC-46A’s deployment and its global command and control capabilities.”

These command and control capabilities include the tanker’s ability to communicate and exchange data over secure and unclassified networks and to employ unspecified “situational awareness systems”. The Air Mobility Command casually added that the information contained in the press release “was sent to AMC leadership using the aircraft’s in-flight communications links.”

A presumably automated human performance monitor on board the flight collected quantitative data throughout its duration. AMC said the information, along with that gathered during the other recent 20-plus-hour missions, “will be used to inform decision-making for future norm-breaking employment opportunities.”

The KC-46’s day-and-a-half refueling mission may have violated norms for the air refueling community (if not the USAF strategic bomber fleet), but it also arguably sent a message the Air Force did not intend.

In its recent rampant quest to trade capacity for hoped-for capacity, the service is axing its fleets of fighters, bombers and tankers, forcing them to do more with less. For the Chinese, the realization is that a new KC-46A — even one that flies an extreme 36 hours — cannot have the capacity and flexibility of the three or so old tankers that each is expected to replace.