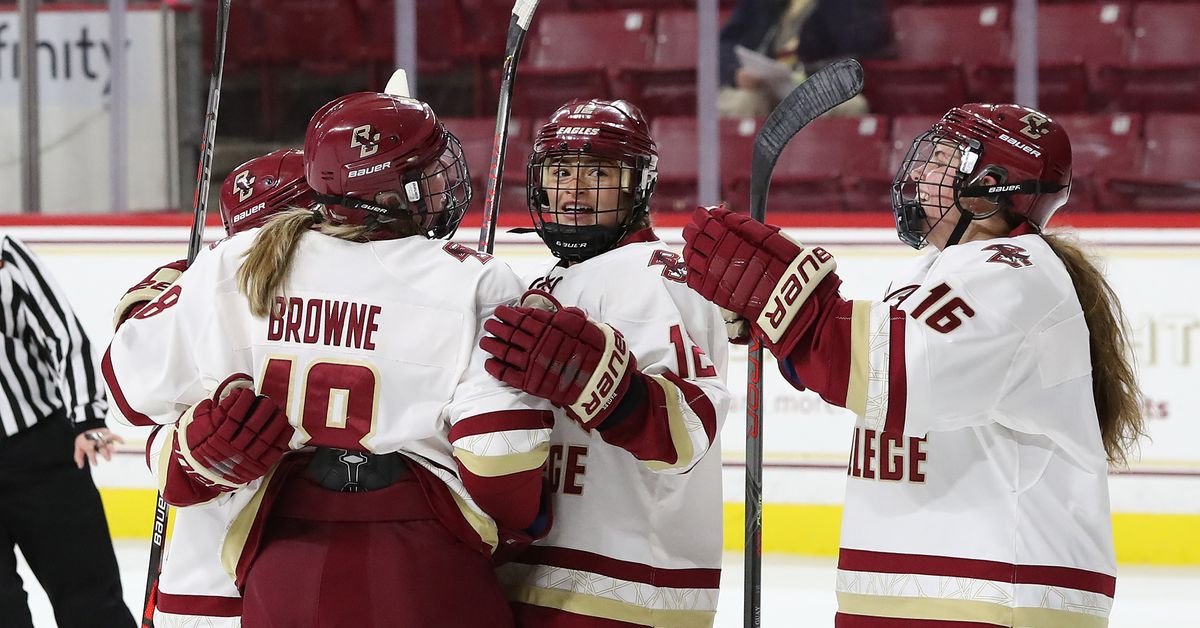 Boston College Women’s Hockey ended their four-game losing streak this weekend by beating the New Hampshire Wildcats in a home-and-home series. It wasn’t a perfect weekend, and it wasn’t quite as comprehensive as BC’s two wins over BU a couple of weeks ago, but the Eagles pulled it off. After a 3-1 win Friday afternoon at the Conte Forum, the Eagles earned a 3-2 victory in overtime on Saturday at the Whittemore Center to complete the win and set their .500 record back to 8-7-1.

Both games were very similar as BC seemed to be the better team overall but never really looked dominant. After a slow start on Friday, Abby Newhook opened the opening goal of the second period, scoring a 180-minute goalless stretch for the BC offense that stretched into November 5. She added another early in the third round to make it 2-0 before UNH’s Emily Pinto and BC’s Caroline Goffredo traded late for the 3-1 final score.

The Eagles started a little better on Saturday with goals from Gaby Roy and Kate Ham to lead 2-0 into the first break, but the game faltered a bit from there. Unfortunately, BC got a bit complacent in the last frame and UNH scored twice – including once with the extra attacker in the dying minutes – to level the game and send the matchup into overtime.

Luckily, Abby Newhook ended their stellar weekend with a sweet top shot in overtime to give BC a 3-2 win.

It wasn’t quite the performance BC might have hoped for (especially with the 2-0 lead in game two) but based on boxing results from each game it looks like Coach Crowley is still working on it to change around lines. Olivia O’Brien started the weekend with Hannah Bilka and Abby Newhook at the helm, but at some point (possibly even in the middle of Friday’s game) the coaching staff switched things up and brought Caroline Goffredo into the top flight. Goffredo has been working hard to move up the middle since returning from injury a week or two ago and her return will allow the coaching staff to be much more aggressive with the top pair lines.

With just three goals scored in each game against one of the bottom teams in the league, it will be interesting to see if Coach Crowley keeps moving things to try other combinations. The Eagles will have an intriguing matchup against Harvard on Tuesday night before the team can take some time with their families over Thanksgiving weekend.