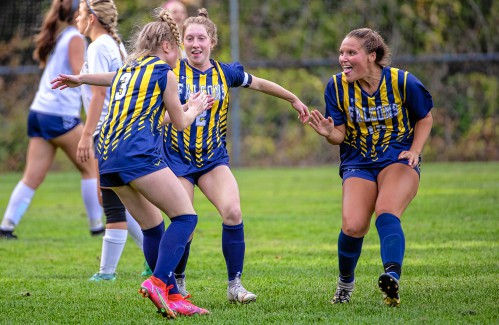 The New Hampshire Soccer Coaches Association released their all-state rosters and typical season-ending awards to the media on Friday, but the 2022 edition includes a very special award for a local coach.

Bow High School girls’ college footballer Jay Vogt was recognized by his peers by being elected to the NHSCA Hall of Fame after leading the Falcons to the top of Division II.

Vogt – who has overseen Bow’s program for the past 19 years – coached the Falcons to a 15-3 record and a semifinal appearance for the 13th straight season. In his 19 years as head coach, Bow has won six championships (most recently winning the D-II title in 2021 and 2017) and made ten finals between D-II and D-III.

Bow had the most All-State and Honorable Mention picks from any regional program and the most Twin State Lions Cup selections of any team in the state. Falcon forward Lyndsey LaPerle, midfielder Bella LaPerle and defenseman Marissa Green have been named to an all-star roster made up of the top seniors from all four NHIAA divisions. The New Hampshire Seniors All-Stars will face off against the top Vermont seniors in next summer’s annual Twin State Lions Cup.

All area all-state selections are listed below.