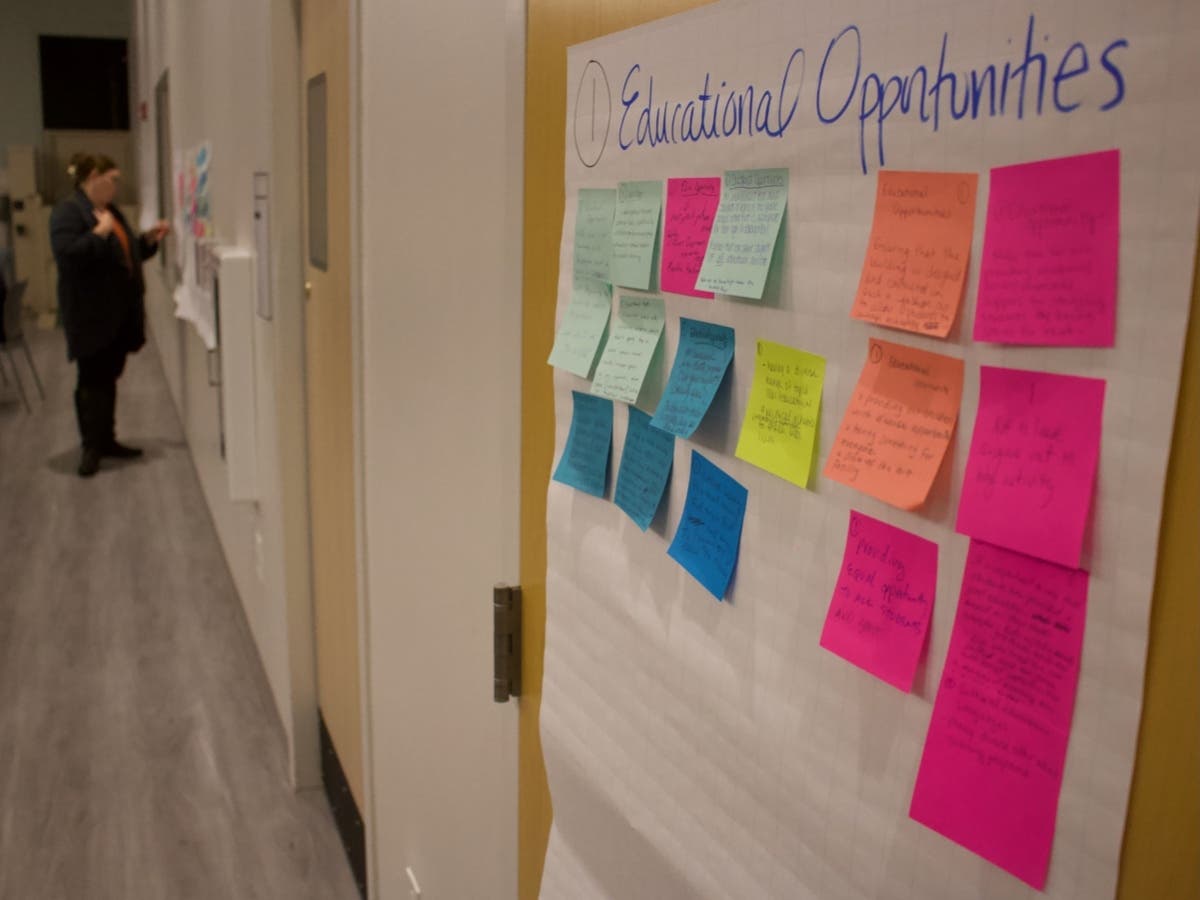 CONCORD, NH — Sustainability, equity, cost, walkability, safety and educational outcomes related to a new middle school were all analyzed at a workshop Wednesday by about three dozen participants.

The Concord Greenspace Coalition hosted the “Middle School Location and Design Workshop” at the citywide community center. The participants, a mix of residents and parents, school staff from SAU 8 and members of the Education Committee, reflected on what they expected or hoped for from a new middle school.

The workshop was moderated by Carisa Corrow from Educating for Good, a Penacook educator. She told attendees that for the workshop process to be successful, everyone had to “trust the process”.

While sharing their thoughts, they also had to take time to stand up, step back and listen to others, familiarize themselves with discomfort, and share ideas with love and kindness, while also absorbing all ideas without people’s intentions to accept the thoughts and concepts offered.

For two hours, participants thought and talked about the educational opportunities a new school would bring, what it would cost and whether it would be safe, walkable or sustainable.

Although billed as a ‘location’ workshop, little time was devoted to discussing location.

The location was named under the equity category, with some mentioning that a new middle school would be built on the east side of town, while a couple also mentioned the need for more than one middle school.

While there were some constants, as might be expected, there were also differences.

Walkability, a key part of the Concord Greenspace Coalition’s effort to prevent the middle school from moving to Clinton Street on the CenterPoint Church athletic field, was quickly ranked as “the lowest priority” and was “unachievable” even though it was considered important. So many middle school students, approximately 850, have no other option of reaching school than being driven to Rundlett Middle School by car or bus. A new school in the same place will not change this reality.

Even with a second middle school on the east side, or even a third via a hypothetical SAU mix between the Concord and Merrimack Valley school districts, many students would still need transportation.

However, getting to the school and site should be considered as part of the security component, some said.

Dozens of ideas also focused on what is perhaps the most important aspect of the project: educational opportunities.

The comments mainly mentioned activities and learning within the physical building – state-of-the-art facilities for arts, science labs and nature-based learning. Participants wanted a diverse range of courses, subjects and labs offered, including AP courses. They said the school must also serve students of all educational abilities and inclusion. Ensuring space for physical activities was also mentioned.

There was a strong focus on sustainability, with most participants saying they wanted the building to be LEED (Leadership in Energy and Environmental Design) certified, have a low carbon footprint or ‘net zero’, with appropriate materials is used and is environmentally conscious that the building is “a model of learning”. Electric and public transport and the fact that the district did not choose the lowest bidder caused a good deal of laughter in the room. However, another participant simply wrote, “I don’t care.”

One comment referred to equity as “the priority”, with access to transport, a sense of belonging to the school and school placement raised as problems and concerns.

Security and protection focused on “thoughtful design”, more technology, the elimination of doors and better visibility. Several participants also expressed concerns about the concept of the Concord YMCA having access to the building or being part of the project. Security must not be traumatizing either. The district should also hire “trauma counselors” for the students.

Corrow said in passing that there were some interesting security issues, although it was nearly impossible to keep the students safe.

“The thing we need to focus on is[making sure]kids feel safe and secure, valued and included,” she said.

Participants also looked at costs – which offered a variety of opinions. Some suggested waiting a few years due to inflationary costs or until costs come down, while others said it didn’t matter as it was for the children and an investment in the community. The sustainability of the materials was also mentioned, with a focus on durability. The rapid construction of the school was also mentioned.

Principal Kathleen Murphy thanked everyone for submitting all their ideas.

She said the county was fourth on the state aid list and was also the most expensive project considered of the 17 that advanced to the next round of funding. SAU 8 is approved for US$70.5 million at a price of US$176 million. Approximately $49 million is available over the next two years, likely to be allocated to the first three requests. If the district doesn’t receive the money in the next two years, it will be first on the list in 2025, provided funds were available.

Murphy said future Concord middle school students deserve a 21st-century learning environment. To that end, she said, the district will apply for an architect’s qualification. Later, a request for quotation for a construction company will also be sent.

Murphy urged everyone to contact their state legislatures and senators and ask them to put some excess money into the school building aid account so Concord would get more money sooner.

Jim Richards, the school board president, said the process was conducted as it was five years ago and this is a good update. Right now, he said without going into details, the department is eyeing a dozen sites for a new school. It was never just two, Richards said.

Richards, who serves in Districts 1, 2, 3 and 4 of District A, said while it was great to have dozens of people in attendance, he was disappointed that more residents from his districts didn’t attend.

While Corrow viewed the event as constructive and fruitful and said it was manageable for her to moderate, many more people needed to be involved in the process of a project of this magnitude.

“There must be other people in the room,” she said.

Corrow said the district could also go into the community and “where people are,” visit more groups or organizations, or even meet people at places like a laundromat to ask questions “in those spaces.” These are the people who are affected, but who do not attend or come to events such as the workshop.

When asked about the ideal number of people to participate in a project like the middle school, Corrow said, “10 percent, something like that,” or for the Concord School District, about 4,000 people.

But getting back to the idea of ​​meeting people where they were, Corrow said the information could also be gathered through surveys and other avenues.

New financial data on what the project will cost taxpayers was not available.

But even with the state aid, up to $104 million could have to be borrowed and paid by property taxpayers, in addition to the 20 years of debt still being paid for the elementary school consolidation project, which had a final cost of $90.8 million. and already historically high wealth taxes.

Concord School District taxpayers are also still paying inflated property taxes because the high school repair bail was never reduced in 2009, when it ended. This is one of the many downsides of an autonomous school district — they can do whatever they want while every other New Hampshire municipality has to lower the tax rate after the bonds are paid.

At a 5 percent interest rate, the total cost of a new middle school could be about $201 million, not counting $70.5 million in state aid. At 6 percent, the final cost could be as high as $224 million, also without government aid.

The bond for the roughly $55 million elementary school consolidation project was estimated at about $100 per year for a $250,000 home, with a $10 annual increase through 2041 at a cost of about $400 US dollars last year. Ties to Concord High School have also risen annually, costing property taxpayers hundreds of dollars a year for something that was paid for 13 years ago.

The average valuation of a single family home in Concord is now around $325,000.

One could easily assume that a new middle school will collect property taxes between $350 and $600 per year, with yearly increases across the bond, like those for the elementary schools and the CHS bond.