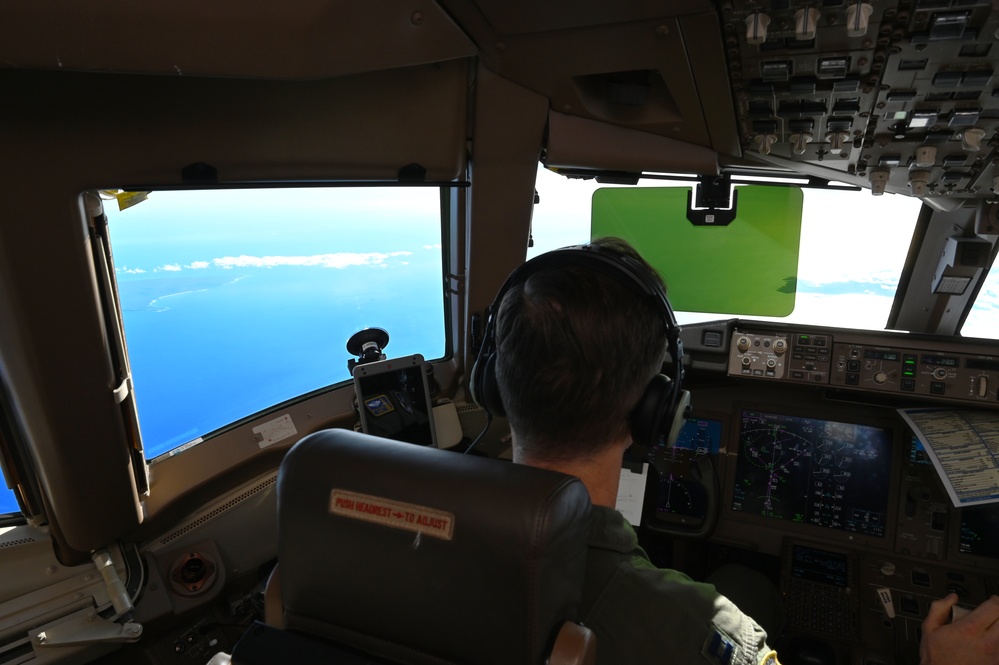 A KC-46A Pegasus from the 157th Air Refueling Wing flew a non-stop mission halfway around the world and back from Nov 16-17.

The point-to-point, 36-hour, 16,000-mile, multi-crew, Total Force deployment was the longest such mission in the history of Air Mobility Command, the main active-duty command to which the 157th is attached.

“This expanded mission is another example of capable airmen taking command and moving out to expedite our deployment of the KC-46A,” Minihan said. “This Total Force mission boldly underscores the need to think differently, change the way we do business, and offer options to the Joint Force.”

The crew left the east coast of the United States on a cold and wet morning and flew west across the country and out into the Pacific Ocean. After flying over Hawaii, the crew flew across the International Date Line to Guam before turning around and retracing their steps to New Hampshire, where they landed on the evening of November 17, 36 hours to the minute after takeoff.

Maj. Bill Daley, the mission’s aircraft commander and a traditional member of the New Hampshire Air National Guard, said the flight demonstrates the jet’s ability to project collective power through its ability for endurance, crew retention, refueling, situational awareness and connectivity and to connect , and airborne mission planning.

The KC-46A Pegasus offers the Air Force strategic flexibility with its unique blend of tenacity and presence. Staying airborne for hours requires a steady supply of fuel. Since each KC-46A can be self-refuelled in flight, each aircraft can remain in theaters of operations to provide sustained support to armed aircraft. The endurance mission demonstrated these capabilities, refueling three times mid-flight and refueling F-22 fighters while flying in closed-loop control off the coast of Hawaii.

It takes more than gas to stay airborne – the crew also needs provisions, and this was another refueling barrier tested and destroyed on the mission. Alternating at the controls were two crews from the NH Air National Guard’s 133rd Air Refueling Squadron and an active crew from the attached 64th Air Refueling Squadron. While one crew flew, the other two rested and took advantage of the jet’s modern amenities.

According to Daley, previous generations of tankers lacked the fundamentals needed to support crews for long-term, multi-day missions. He said the old jets are incredibly uncomfortable and can go from hot to cold, contributing to crew fatigue. The Pegasus is in stark contrast to this.
“It’s like flying with first class service,” said Daley, who is a civilian airline pilot when not flying for the Guard.

The KC-46A is air-conditioned and equipped with a kitchen, crew bunks and a toilet. The configurability of the cargo area also allows for the placement of airline-style seats and additional sleeping areas to accommodate larger crews. A palletized kitchen and lavatory were also added for the endurance mission to support the crew of 16, which included boom operators, aircraft maintenance personnel and a flight surgeon.

Master Sgt. Michael Windy, a boom operator with the 133rd Air Refueling Squadron who had nearly 3,000 flight hours on the KC-135 prior to switching to the KC-46, agreed with Daley about the increased comfort of the new aircraft capable of missions like this allows . With only a few hours left in the endurance effort, Windy said he felt rested and comfortable.

“I was on the 22-hour deployment we flew to Saipan a few months ago, so I already had an idea of ​​what to expect,” said Windy, who worked hard to make it accessible to the rest of the crew became comfortable and full. “I really haven’t noticed a huge difference in how I feel.”

Senior Airman Paige Dunleavy, an avionics technician for the 157th Air Refueling Wing, said this is her first ever crewed trip.

“The joke is my first TDY is Pease,” she said of the unusual point-to-point mission.

As a new aviator undergoing upgrade training, it was an excellent opportunity to see firsthand how the crew are using the systems they maintain.

“I definitely learned things and it was the first time I was able to troubleshoot a system in flight,” she said, noting the restart of the civilian satellite communications system that she and another avionics technician had to perform when the Flight crew was handed problems.

Towards the end of the mission, Dunleavy reported feeling overall normal, although she added that the hiker in her was excited to get back on the ground after flying over the Grand Canyon on the trip’s return leg.

Maj. Heidi MacVittie, a flight surgeon from Pease, served as human performance monitor aboard the flight and collected quantitative data throughout the mission. This data, along with that collected during the wing’s most recent 20-hour mission, will be used to aid decision-making for similar missions in the future.

“This mission was a true example of Total Force Integration,” said Lt. Col. Brian Carloni, the 157th Operations Group commander. “The expertise of both our Guard and Active Duty Airmen in executing this mission has demonstrated the importance of teamwork in any wartime scenario.”

Daley said the success wasn’t just down to Total Force’s crew aboard the jet. The mission, which came almost two months to the day after Minihan approved the KC-46A for worldwide deployment – ​​including combat missions – was the result of several years of hard work and dedication from the entire wing and ultimately demonstrated its strength bring to fight.

“We have a healthy fleet and are demonstrating full mission readiness with onload and offload capabilities. We could execute tomorrow if we had to,” he said.