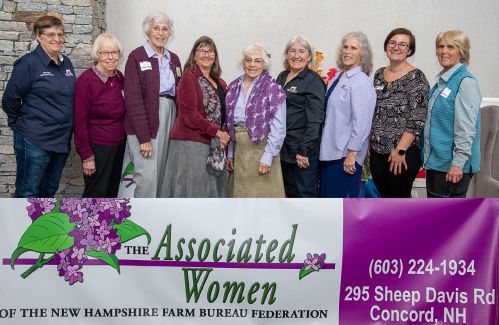 Farmers are loners. We love our plants, animals, families and our privacy. But once a year, we engage with fellow farmers at the New Hampshire Farm Bureau Federation annual meeting. NHFB has 3,000 member families spread across our 10 counties. Each district organization has a local board and a different district hosts the annual meeting. This year it was Merrimack County’s turn and the Grappone Conference Center in Concord was the venue.

The meeting included a conference of two to three elected delegates from each county. In the morning session, 24 members voted on policies important to New Hampshire farmers. These guidelines guide Rob Johnson, NHFB Policy Director, in lobbying for pro-farm legislation in the New Hampshire legislature.

For example, NHFB supports the recently attacked New Hampshire Current Use Law. Suppose this law, which lowers taxes on farmland, were repealed. If farmland were taxed at its value as potential housing development, rather than its lower value as grazing land, many farmers would be forced to sell.

Farmers who plow fields, fertilize crops and fight weeds now have another enemy: two-legged thieves. People who would never think of stealing from a grocery store take squash, corn, and other crops. Also costly to farmers are people who ride bicycles, motorbikes or even wander across fields, smashing crops and destroying crops. NHFB has worked to pass legislation increasing penalties for crop theft and farm vandalism and providing compensation for crop damage.

Other invaders include bears and deer, which can eat or trample crops in the dark of night. Hunting is a powerful way to protect crops, but frustration simmered among some NHFB members when they discovered wildlife cameras had been placed on their farms without permission. We farmers like privacy, and unauthorized cameras are really surveillance devices.

Farm Bureau members also teach children about farming. Some people don’t know that the milk comes from a cow that has given birth and that female cattle can have horns. NHFB hosts and provides administrative support for K-12 agriculture in the classroom program. This program brings farmers into the classroom and sponsors annual School to Farm Days where students spend a day on a working farm. This year nearly 1,300 fourth graders in eight counties visited various farms.

The Farm Bureau encourages young farmers (aged 16-35) to compete for excellent awards. Candidates are judged on their commitment to agriculture and leadership skills. Two of this year’s winners, Kristen Gowen and Caroline Crouch, are traveling to the American Farm Bureau Federation convention in Puerto Rico, where they will compete against young farmers from all 50 states and territories. Oh to be young again!

NHFB is a grassroots organization run by farmers to help farmers and landowners. Farm support also benefits consumers. If you want to eat food and support local farms, please join the NH Farm Bureau. You don’t have to be a farmer to join; You can join to support us. Though we enjoy our alone time with crops and livestock, we need all the friends we can get!

Carole Soule is a co-owner of Miles Smith Farm (milessmithfarm.com) in Loudon, NH, where she sells beef, pork, lamb, eggs and other local produce. She can be reached at [email protected]