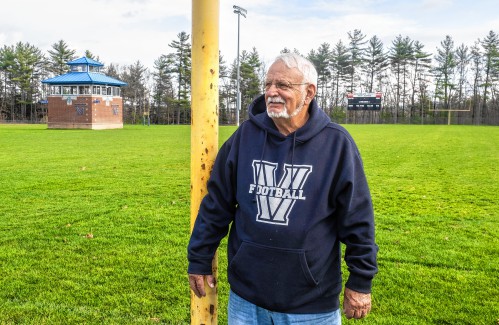 Joe Raycraft considered retiring from coaching a few years ago.

He had already done so much by then. He was appointed athletic director at Merrimack High School more than 50 years ago to oversee the entire program and bring varsity football to the school for the first time.

He later served as Director of Athletics for the three high schools in Manchester. He has lived in Penacook with his wife for 53 years and has cast a large, impactful shadow on the sporting landscape here in both youth and school sports, instilling skills that help students, on the court, on the field and succeed outside the lines.

But the recently retired head coach of the Merrimack Valley High School football team had some unfinished business this fall before putting his whistle and clipboard away for good: coaching his grandson Riley Flynn during his fourth and final season at varsity.

“I thought it would be nice to stay and watch him in his senior year,” Raycraft said.

And while Joe focused on that, his daughter, Robin Raycraft, had an idea of ​​her own: nominate her father as the winner of the contest monitors Hometown Heroes series.

“With all the lives he touched, I felt he was worth it,” said Robin Raycraft. “I remember when the phone rang it was always a kid asking, ‘Is the coach there?’ Sometimes it was a player or a former player who was now training.”

It’s doubtful that the name “Coach” will soon disappear as a Raycraft identifier. He did.

He also played basketball and baseball at New Hampshire College. He coached three sports at Bishop Brady and moved into administration as athletic director at Merrimack College in the early 1970s.

“It worked out well,” said Joe, a man of few words.

He won state softball titles at Campbell High School in Litchfield. And as a longtime resident of Penacook, Raycraft’s children and other family members attended classes at the Merrimack Valley School District, spurring him on to a brief coaching career near his home.

In recent years he has filled in when Merrimack Valley Middle School needed a coach and has spent the last five years as head coach of the high school’s varsity football team.

And after his grandson ended his four-year career as a tackle for Pride last month, Raycraft was finally comfortable with his decision to retire from coaching.

In her letter of nomination to the national team, Robin Raycraft cited many of her father’s coaching successes monitor. But the real meaning of her letter was about the benefits of true leadership in organized sport that have nothing to do with winning and losing.

“The number of lives he touched just by being around and teaching thousands of kids how to love a sport, how to be a good sport and how to be the best version of yourself,” Robin wrote. “He feels that your behavior as an athlete was just as important on the field or court as it was when you weren’t. He taught endurance, resilience and played more roles than just a coach.”