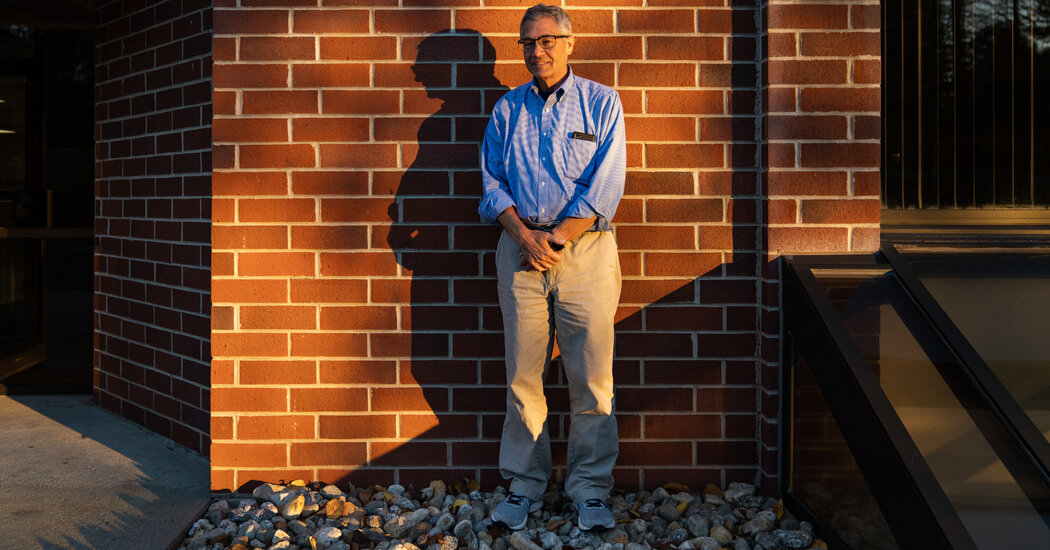 WINDHAM, NH — Brad Winslow is a personable 67-year-old who hugs people he’s just met. But his confidence dwindles in elections. A self-proclaimed geek who has spent much of his career programming machines, Mr Winslow has long suspected that vote counting tabs could be manipulated to favor one politician over another.

“I have no faith in the voting process,” he told me.

Mr. Winslow has felt this way for decades, long before the Big Lie. But a vote counting error in the 2020 election in Windham, the city where he lived, deepened his doubts. He joined a citizen group looking for evidence of fraud and says he bought an AccuVote vote counting machine – the same old model New Hampshire still uses – on eBay to see if he could prove his suspicions.

It’s tempting to dismiss him as a conspiracy theorist. Lots of people do. A New Hampshire suffrage activist warned me, “These people cannot be placated.” But the line between a bigot and a die-hard investigator can be hard to draw. Mr. Winslow has spent countless hours researching the mechanics of elections. Wasn’t that good? Doesn’t democracy depend on citizens asking questions and demanding answers? I decided to listen to him to see if there was anything that could restore his faith – or shake my own. Eventually, I came to the conclusion that instead of firing skeptical voters like him, we had better see how they force us to remain vigilant in our elections.

Long before Donald Trump hijacked the rhetoric of electoral security, pundits warned that America’s decentralized elections are at risk from human error, software bugs and hackers.

Most Americans are confident about the elections, and they should be. But that doesn’t mean we should be complacent. In other words, both statements are true: the 2020 election was not stolen from Donald Trump, and work needs to continue to ensure that every vote cast is counted as it should be.

And yet election security is difficult to deal with today because it has become such a toxic and divisive topic. Democrats often avoid speaking about it for fear of giving vent to the lie Mr Trump won in 2020. Republicans often advocate policies that make voting harder without actually making elections safer.

Beyond the fear of stolen elections, there is real debate over whether to prioritize access or security. Steps Democrats plan to take to make voting easier — such as same-day voter registration or mail-in ballots — have been criticized by Republicans as facilitating fraud, despite little evidence to back it up. The way Republicans plan to tighten security — by cleaning voter rolls or requiring ID — has been criticized by Democrats as a sneaky attempt to stifle the vote. These fees can also be excessive.

That’s one of the reasons New Hampshire’s Secretary of State, David Scanlan, earlier this year created a bipartisan Voter Confidence Task Force, which has held listening sessions with voters across the state. Mr Scanlan hopes that the public discussion will bring about a consensus on the right balance between access and security. He even appointed Ken Eyring, a founder of the civic group of which Mr. Winslow is a member, to the eight-member committee. Liberal suffrage activists were outraged. Mr Eyring had written blog posts about exposing “rampant” voter fraud, which was not true. But the committee is banking on the idea that including voters like him is a better strategy than ignoring or demonizing them.

Although the recent midterm election lost to high-profile conscientious objectors, according to recent polls, about 17 percent of American voters were not confident that their midterm ballots would be counted accurately. The question of how to deal with this small but vocal minority will occupy us for years to come.

I first met Mr. Winslow in June when he was attending a workshop on trustworthy choices hosted by a group called the Braver Angels. Like the New Hampshire Special Committee, Braver Angels is trying to find common ground and restore trust in people like Mr. Winslow. A libertarian who dislikes Donald Trump and Joe Biden, Mr. Winslow is one of eight conservatives who sat down with eight liberals. Liberals worried about people who were eligible to vote but couldn’t vote because of unfair barriers. Conservatives worried about fraud — non-citizens voting, people voting twice, or computer software switching votes. However, both sides agreed on a few things. After hearing about long lines outside polling stations in Atlanta, conservatives added “voter suppression” to their list of concerns. At the end of the workshop, both sides agreed on things that will increase confidence in elections. It included the use of paper ballots and frequent by-election reviews.

That is good news. It’s consistent with what experts have been saying for years. A 2007 report by the Brennan Center for Justice, a 2018 report by the National Academies of Sciences, Engineering, and Medicine, and a 2021 report by the Bipartisan Policy Center Task Force on Elections all recommended the same thing: paper ballots , machine counted, and a “risk-limiting” post-election check that compares some paper ballots with machine counts to ensure that both counts match and are correct.

Paper ballots are vital as they cannot be hacked and are easy to verify. Machine tabs that count paper ballots are very accurate—more accurate than counting by hand. The machines that keep poll security experts up at night are the ones with touchscreens, dials, or buttons that leave no trace of a voter’s intent.

The country is making progress. Machines that don’t leave paper trails for testing are disappearing, although they are still used in jurisdictions in six states: Texas, Mississippi, Louisiana, Indiana, New Jersey and Tennessee. But only a few states carry out risk-limiting tests.

“I honestly want to believe that our elections are free and fair because the alternative is pretty bleak,” Mr Winslow told me.

In the end, a forensic examiner discovered why: some ballots were improperly folded, leaving creases that a vote-counting machine mistook for votes. Most were satisfied and moved on. But not a small group.

One threatened the auditor’s life. But others focused on collecting data. Mr. Winslow studied the votes from all the Windham machines, looking for signs of fraud. During our time together, Mr. Winslow seemed factual, well-intentioned, and patriotic. I respected his immersion in data. I went down the rabbit hole, read a book he mentioned and watched a documentary he recommended. I perused a chart he had compiled which showed that one teller in Windham had processed a far higher percentage of Democratic ballots than anyone else. Was that evidence of fraud? It was a legitimate question. But when the town clerk explained why — that machine had tallied all the absentee ballots, which were far more likely to be Democratic — I was satisfied. Mr. Winslow does not. He had heard otherwise. He wanted to look at the code that programmed the machines. That was impossible. It belonged to a private company.

Perhaps there is nothing that would please Mr. Winslow. If scam hunting is your hobby and passion, you might not want the hunt to ever end. We may never agree on what happened in 2020. But I have hope that some sensible changes, like risk-limiting exams, could give voters like him more confidence in future elections.