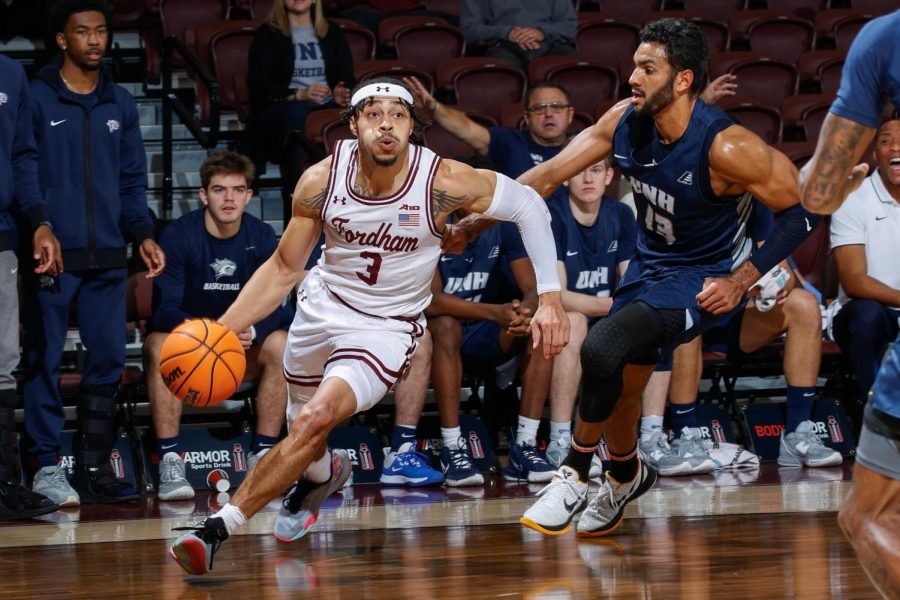 With 10 minutes remaining in the closing stages of the Rams’ second basketball game of the season against 10th-ranked University of Arkansas on Nov. 11. Antrell Charlton, Fordham College at Rose Hill (FCRH) ’24, got the ball on the left wing, drove and was called out for a trip. He dropped the ball and looked around in disbelief. It was the ninth turnover from the grid on a deflationary night. The Fordham men’s basketball team had 30 turnovers in a 48-74 loss to the Arkansas Razorbacks.

That road trip was a dose of reality for head coach Keith Urgo’s inaugural campaign. Encountering such a high-profile team has lifted the spirits of the Rams, after a first success measurement against Dartmouth on November 7th.

Heads down, the team returned from their stint in the south. On Tuesday, November 15, however, the Rams had an opportunity to turn things around against the University of New Hampshire (UNH) Wildcats.

Fordham wasted no time and capitalized by trampling the Wildcats on the Rose Hill campus, 79-61.

The Rams’ desire to come back was underscored by their explosive 11-2 run in the opening minutes of the game. The Wildcats were in disarray as the Rams defense turned into a hard-hitting offense.

Within seconds of the tip, Graduate School of Arts and Science (GSAS) ’23 Darius spotted Quisenberry in the corner and dumped a 3-pointer. Charlton followed with a deep, high arc three. The run continued and Quisenberry forced a timeout after piercing the Wildcats’ defense for a layup.

The Wildcats came out of the timeout aggressively, but nothing fell. Quisenberry sank another long-range shot, and the Rams’ defense continued to force hard shots from New Hampshire. Even as New Hampshire fought its way back into the game, the Rams’ offense kept raining shots. At halftime in the first period, the Wildcats were 19:12 behind.

With 14 minutes to go, Will Richardson, FCRH ’26, who was struggling in his early Fordham career, rang in a three. It was only his second field goal of the season.

Despite taking an early lead, Fordham faced a New Hampshire run that reduced the lead to just two at 25-23 with six minutes left.

It came as no surprise that point guard Kyree Brown, UNH ’24, and forward Clarence Daniels, UNH ’24, led the run. Both are new faces for the Wildcats but have put up impressive numbers, averaging 17 and 16 points per game respectively. Uncharacteristically, Brown shot 16% from the field against the Ramswhich puts UNH in a difficult situation to climb out of.

Quisenberry responded with a haymaker to the Wildcats with the help of transfer Khalid Moore, GSAS ’23. Their efforts helped Fordham secure a commanding 37-27 lead with a minute remaining. Alongside the offense, defensive anchors Rostyslav Novitskyi, FCRH ’23, of Ukraine, and Abdou Tsimbila, FCRH ’24, of Cameroon, tumbled to backboard. The forwards combined for 15 rebounds that night, including four offensive boards.

The Wildcats’ efforts faltered spectacularly when they gave up and substituted their starters in the closing minutes.

However, Brown reacted decisively. He took a high screen from Ridvan Tutic, UNH ’26, drew the three and sank it with six seconds to go. Despite New Hampshire’s quick reply, the half ended 40-30 with Fordham in control.

In the second half, the Rams extended their solid lead into an overwhelming victory. Brown struggled on offense as his 6-foot frame placed him at a severe disadvantage. Three minutes into the second half, Brown got on a float and Tsimbila sent the shot straight back.

Brown’s troubles were not isolated. The Wildcats shot 28% as a team in the first half and only managed a marginal increase to 35% in the second. New Hampshire has struggled to get their team together this year, with only five players returning for the 2022-23 season from the previous season.

With 14 minutes to go, Will Richardson, FCRH ’26, who was struggling in his early Fordham career, rang in a three. It was only his second field goal of the season.

Daniels was the only bright spot for the Wildcats. He shot 80% from the charity strip and 40% from the field. The newly minted New Hampshire Hooper finished the game with 16 points, setting himself apart from his teammates.

The game went on as a total takeover by the Rams. They reached their biggest lead – 28 points – four minutes ahead of a floater by Moore, 77-49. The Wildcats’ efforts faltered spectacularly when they gave up and substituted their starters in the closing minutes.

A small offense from the Wildcats secondary prevented a 20-point deficit, but the game ended with Fordham in complete control, 79-61.

Quisenberry finished the game with 17 points in 3-of-6 shooting from behind the arc. Moore scored 16 on 6 of 8 from the field. Charlton had a near-perfect payback game, hitting all four of his field goals for 15 points and just missing a free throw. The team had 15 sales left, with Charlton contributing four.

The Rams are now 2-1 and will take part in the energetic Tom Konchalski Classic tournament. The competition takes place in the Bronx when the University of Illinois Chicago, Stonehill College and the College of the Holy Cross meet to compete in front of an audience in Rose Hill. The tournament runs from November 19-22 and will highlight the work of the Tom Konchalski Foundation, which aims to uplift basketball players through Catholicism.