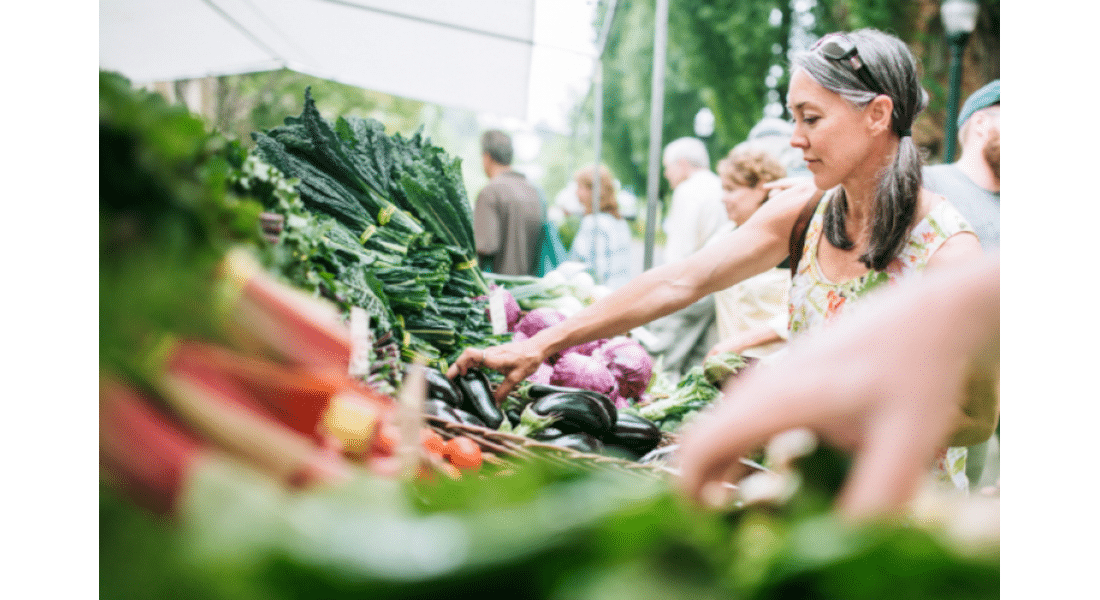 A woman browses a stall at a farmers market for a variety of fresh vegetables.

DURHAM, NH — The global pandemic has upended the way we work and live, and so has it been for America’s farmers — particularly those involved in direct selling (DTC). Farmers’ markets have been temporarily closed and farmers have had to quickly switch to online sales and delivery services. However, farmers and their many stakeholders began collaborating on exciting new DTC models, spurred by the need to keep their operations – and their livelihoods – running, says Analena Bruce, assistant professor in the Department of Agriculture, Nutrition and Food Systems at COLSA and a researcher funded by the New Hampshire Agricultural Experiment Station.

“The pandemic has accelerated innovation in some of these food distribution models,” Bruce said. “And now let’s look at what we’ve learned, how consumer buying behavior has changed in relation to DTC sales, and what lessons we need to learn to help small and medium-sized farmers in New England?”

Bruce and her team, including Jess Carson and Isaac “Ike” Leslie, recently won two major grants to study alternative food networks (AFNs) – food networks that connect farmers and consumers more closely – with the goal of developing AFNs and marketing models to identify who help small and medium-sized farmers in New England. Funding for this research was granted in 2022 by the USDA Sustainable Agriculture Research and Education (SARE) program and NIFA’s Agriculture and Food Research Initiative (AFRI).

What are AFNs and why are they important?

Classic examples of AFNs include farmers’ markets, community-supported agriculture, and farm stands—all of which are typically sold directly to consumers. However, more recent innovative AFNs – like Food Hubs – are taking some of the burden off farmers and reducing consumer engagement to participate. An example of a local food center is the Three River Farmers Alliance, a New Hampshire-based agricultural food center that offers farmers and food companies in northern New England and Massachusetts various ways to distribute to consumers and restaurants. grocery stores, schools and hospitals. These include subscription plans for home delivery; satellite pickup locations in New Hampshire, Maine and Massachusetts; and an online wholesale marketplace with the option of weekly delivery.

“Their typical direct-to-consumer model requires a lot of time and work for farmers — both promoting and running those operations,” says Bruce. “And they require a lot of consumer engagement by driving to those places and shopping or picking up the food.”

Other disadvantages of DTC food networks are limited food choices and often higher prices than grocery stores – mainly because farmers do most (if not all) of their own marketing as part of the farm. AFNs, using more collaborative and centralized marketing, offer a more farmer- and consumer-friendly version of DTC models by adding an intermediary who can aggregate produce from multiple farms and help with marketing and public relations.

“Any type of system that aggregates produce from multiple farms and brings them together in a convenient and accessible online platform makes it easier for everyone,” says Bruce. “Consumers can order whatever they want and choose from a variety of delivery or pickup options.”

And while these collaborative models help make fresh food more accessible, higher prices can continue to pose a challenge, particularly for smaller farmers who must compete with much larger, more mechanized farms and food producers and are hampered by the low prices of large-scale food aggregators and retailers .

As part of their research, Bruce and her colleagues will assess and collect best practices and ideas for collaborative AFNs that overcome some of the logistical barriers of DTC models, such as B. Consumers traveling to farmers’ markets or collecting their CSA boxes have a limited and inflexible time frame, a limited range of products to choose from, and greater overhead and marketing work required on behalf of farmers. Beginning in fall 2022, they will bring together New England farmers and stakeholders (such as corporations and nonprofits involved in building collaborative or brokered marketing models) in interactive workshops to discuss challenges and opportunities, develop a shared understanding of best practices, and create a community of practice.

Bruce and her colleagues will also survey New England consumers to better understand some of the barriers to participation in DTC markets and the potential of collaborative AFNs to overcome these barriers. The findings build on surveys conducted in 2021 and published by the Carsey School of Public Policy and show that more than half of New Hampshire residents occasionally buy groceries from the local farm, but not as part of their regular shopping routine.

“Our previous work on local farm grocery shopping found that 40 percent of survey respondents said there is a ‘type of person’ who buys local farm groceries,” says Carson. “Whether people were identified as this type was strongly related to whether they said they bought local food themselves.”

Previous research identified farmers’ market shoppers as highly educated, upper-middle class and white. The new poll that Carson, Bruce and Leslie will be distributing further explores the link between identity and grocery shopping habits, with a particular focus on people who don’t identify as typical farmers’ market goers. The goal of this survey will be to determine whether shopping at farmers’ markets is just not convenient, or if non-participants have a mental image of who shops at farmers’ markets and that image doesn’t align with their self-image, says Carson.

“By working to unravel the logistical barriers caused by culture and identity mismatches, we can better understand who is missing from the customer base and if and how they might want to access local farm food,” she adds.

Bruce identifies the logistical obstacles that affect who can and cannot shop at farmers’ markets, obstacles such as higher prices and the need to travel to and from the markets.

“But another aspect of farmers’ markets that we don’t usually think about that much is that these venues are also cultural venues,” says Bruce. “The vendors are typically white and have live music and other cultural elements that reflect the people who ran, designed and supported these markets.”

Bruce and her colleagues believe that a typical farmer’s market may not be welcoming or appealing to other demographics, such as people of color, low-income residents, or LGBTQ+ people. With their survey, they hope to test whether cultural identity plays a role in shopping and determine whether a more culturally diverse farmer’s market environment might attract a more diverse clientele. They also want to find out how people perceive farmers’ markets and other AFNs, and whether the marketing messages used to promote AFNs play a role in whether people buy from them.

“So much research has been done about the people who participate in these AFNs, like farmers markets and community-supported farming, but it all focuses on the values, attitudes and preferences of the people who shop there — not the people who do it not,” says Bruce. “Our goal is to increase public participation and engagement because that really makes these markets a viable option for New England farmers. To do that, we need to figure out why people who don’t shop at these places choose alternatives. That’s what we hope for from the survey.”

Support for the team’s collaboration and the questions of the 2021 survey came from an interdisciplinary working group grant from UNH’s Collaborative Research Excellence (CoRE) initiative. Bruce’s work is also supported by the NH Agricultural Experiment Station, through joint funding from USDA NIFA, under award number 1024406, and the State of New Hampshire.