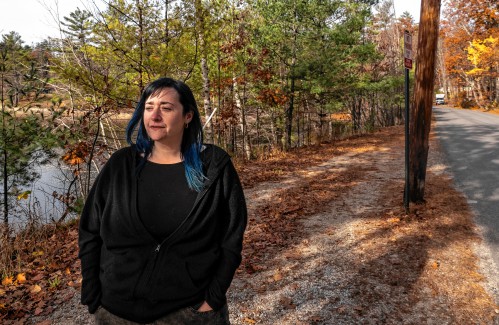 Inpatient psychiatric beds in New Hampshire have long been in short supply, and the pandemic has only made the situation worse, forcing people to seek treatment for their mental illnesses in emergency rooms until a bed becomes available.

Last week, 18 adults and 21 children waited in emergency rooms not equipped for mental health treatment, according to the state Department of Health and Human Services’ tracking tool. Three other adults are waiting in correctional facilities.

However, an innovative mental health program introduced in 2019 as part of the state’s mental health plan is offering a respite from the emergency room crisis.

The Step Up Step Down program offers a compromise for those who need more help than the community can provide but do not require hospital care. It is a non-clinical, voluntary approach to mental health care.

There is “no one size fits all” when it comes to mental health care, said Samantha Captain, co-director of the Step Up Step Down program at On the Road to Wellness, a grassroots mental health organization in Manchester. Individuals can customize the peer-to-peer support program to suit their needs.

Captain had her own mental health issues growing up. She grew up in a home where abuse was commonplace. She had a loving mother and a sister she calls her “greatest ally.” Her father, on the other hand, was a terror.

When she moved to New Hampshire with her family from Westchester County, north of New York City, at age 11, she imagined things would be different. But the abuse only got worse.

Growing up in the 1990s, Captain found it particularly difficult to talk about her struggles with mental illness, as it wasn’t as openly discussed then as it is now. Mental health was something you kept to yourself and suffered no matter what. Thankfully, that’s no longer the case.

As a teenager, she was reluctant to seek help for two reasons: she feared being taken away from her mother and placed in foster care, and she was aware of the stigma attached to mental illness.

“My friends haven’t really experienced the same things as me,” Captain said. “They didn’t know how to talk about it or even acknowledge it.”

She believed the cycle of physical abuse would end after she moved out at the age of 17. Incidents with her father became less frequent while she was in college, but she could never escape the downfall and depression she felt.

At 19, Captain plucked up the courage to confront her father. When she visited him to demand an apology, things weren’t going well for her.

“He physically attacked me,” Captain explained. “He threw me against a wall and choked me.”

Captain’s repeated suicide attempts over the years resulted in multiple hospitalizations. In one incident, she said, police threatened to arrest her against her will unless she voluntarily checked herself into a psychiatric facility. Her last hospitalization was in 2015.

Her visits to the hospital confirmed the feeling that nothing would ever change.

“It was hard knowing things could ever change,” she said. “But they’ve changed, and I think it’s a matter of surviving long enough, enduring enough, and making it through.”

Looking back, she wishes she had had access to a program like the Step Up Step Down program when things were at their worst. She said that instead of being hospitalized, perhaps a similar program could have helped her heal faster and had better support.

The captain repeatedly tried to get her father to admit what he had done. As he lay dying, she said he admitted responsibility for their toxic relationship, but not specifically for the abuse.

Her father’s admission brought her no relief. After everything she had been through, it wasn’t enough.

“For me at that point the damage was largely irreparable,” said the captain. “It didn’t come soon enough.”

After spending three decades figuring out how to manage her mental health, her job has been most helpful alongside breathing exercises and grounding techniques.

“Being there to support other people through difficult times has been incredibly healing for me,” Captain said. “It gave me a chance to make sense of the pain of my past.”

As program director of the peer-to-peer companion program Step Up Step Down, she had the opportunity to heal together with the participants.

William Wood, 68, who took part in the program to combat his depression, worked closely with Captain.

“Sam was an anchor for me,” Wood said. “It helps you open up with your feelings.”

Wood likened the program to an island where he could take stock and get the support he needed, away from the chaos of his normal life.

New Hampshire, as a state, has long struggled to provide access to mental health care for all those in need. The New Hampshire Hospital in Concord is the state’s only psychiatric facility, resulting in a bed shortage.

Outpatient counseling centers are often fully booked months in advance or do not accept new clients at all.

However, the state has made investments that are beginning to bear fruit, including the $13 million purchase of Hampstead Hospital, which has 16 inpatient beds for children and adolescents.

In addition, the state is preparing to build a secure facility for 24 mental illness patients that could operate next to the New Hampshire Hospital in Concord by 2024.

The $30 million hospital was approved by lawmakers in 2020 to house patients in the criminal justice system who were found unfit to stand trial because of insanity or found not guilty. These patients are currently being held in the prison’s secure psychiatric ward, which is not accredited for psychiatric services.

Aside from the one Captain runs in Manchester, the state has three other Step Up Step Down programs in Northwood, Keene and Nashua.

Captain now lives in Weare where she works in the mental health field and has a supportive husband. She feels like her life has come full circle.

She is grateful for the opportunity to change her life and hopes people will see not only her path and resilience, but also her willingness to speak openly about her mental health struggles.

“I’ve come a long way and I think it’s really important that the stigma, the shame and the silence end,” Captain said.

National Suicide Prevention Lifeline: Call 1-800-273-TALK (8255) for free and confidential support for those in need, prevention and crisis resources for you or your loved ones, and best practices for professionals.

Crisis text line: Free 24/7 support for people in crisis situations. From anywhere in the US, text 741741 to text a trained crisis counselor.

The Trevor Project: A nationwide, 24/7, toll-free, confidential suicide hotline for LGBTQ youth. If you are a young person in crisis, having suicidal thoughts, or need a safe and nonjudgmental place to talk, call 1-866-488-7386 to connect with a trained counselor.