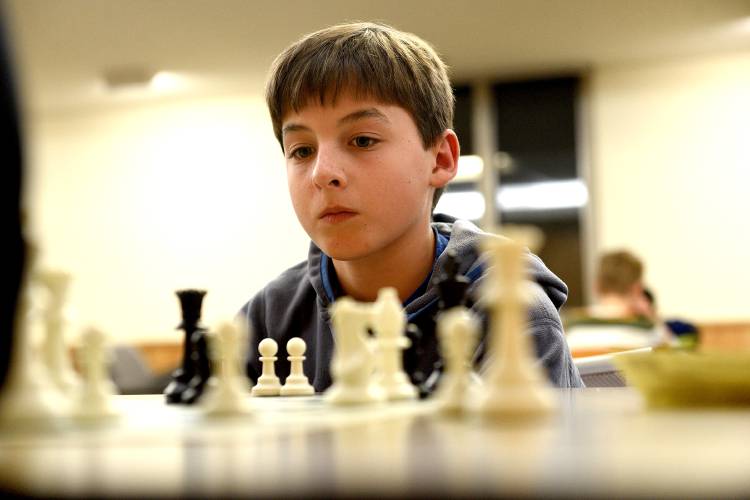 NORWICH — When Walter Chesnut lost a chess match to Alexander Collins at the Vermont Open earlier this month, he was pleasantly surprised.

“I haven’t been dismantled that efficiently in a long time,” said Chesnut, who organizes the national championship. “Even though I lost, I’m happy.”

That’s because that match made Alexander, a 13-year-old Norwich resident, the youngest champion in Vermont history. He won all four of his matches over the course of the tournament, which took place on November 13th and 14th at Burlington City Hall.

“I didn’t really expect to do very well because I had just taken a long break from playing tournaments or any chess game other than chess club, so I didn’t think I would do very well,” Alexander said. “I was a bit surprised but I just felt good playing in the games.”

Competitive chess players are assigned ratings that reflect their demonstrated ability. Beginners tend to be between 600 and 1,000, Chesnut explained. Then come intermediate levels, where Alexander’s rating of 1,792 placed him before the tournament.

“I’ve never seen anything like that, someone who has a very good, solid tournament player rating, not great, not terrible… who had this incredible tournament,” Chesnut said. “He acted like he was a 2,400 rated player. That was his performance rating.”

Alexander didn’t even plan on entering the tournament until it was a week and a half, his father Matt Collins said. One of the members of the Howe Library Chess Club in Hanover, New Hampshire, told him about it during the group’s weekly meetings on Wednesday night. In the run-up to the tournament, Collins said he spent a few hours each day analyzing his own games and studying other chess players’ games.

His interest in chess began in first grade after Collins brought home a board for Alexander, his twin brother Oliver and older sister Penelope.

“I knew just enough to…teach him how to move the figures,” Collins said.

When Collins woke up the next morning to tend the wood stove, he found Alexander already at the chessboard. He had woken up early to play a game against himself.

“He was just so excited about the game,” Collins said. “He really got into it.”

After Bill Hammond, then Principal of Marion Cross Elementary School, saw Alexander trying to encourage his classmates to play chess with him on the playground using the school’s two-foot chess pieces, he approached Collins, to encourage him to take his son to regional chess tournaments.

It soon became a family activity. Every few months they attended a tournament and used the trip for a weekend. Alexander also became a regular member of the Howe Library Chess Club.

“He loves games and he loves competitions and he loves sports and he’s really, really into it and having fun,” Collins said. “He’s just a regular middle school student, but he has this special interest in chess.”

His family leaves Alexander’s chess decisions to him. After playing in a tournament this summer, he decided to take a tournament break to focus on football.

“I think he went into the tournament with an attitude of … kind of staying in the zone and just having fun and making move after move,” Collins said. “He did that and surprised everyone.”

Chess games can last up to six hours, and Alexander’s average for the weekend was 2.5 hours, Chesnut said. As the tournament progressed, other participants became aware.

“As the tournament progressed, if it wasn’t their turn, they would stand up and look at their board whoever he was playing,” Chesnut said. “Everyone was amazed. That was the talk of the tournament.”

His family was equally impressed.

“I’m honestly completely surprised and a little bit devastated,” Collins said. “It was just a very exciting day because it was such an unexpected result and he was by far the underdog but somehow he pulled through.”

The extra attention didn’t seem to bother Alexander, who carefully considered each move before making a decision.

“He takes his time, which is very different from younger players. He was using a lot of time on his watch. He was very thoughtful, deadpan,” Chesnut said. “He just looked at the blackboard, didn’t move, didn’t make any facial expressions. Every move he made was right.”

Alexander has had his fair share of wins, losses and draws in tournaments over the years. But at every tournament he’s learned something new that he’s applying to future games. He has no formal coach. He practices at the chess club and studies tactics with chess books or the internet, Collins said.

While teenagers have competed at the Vermont Open over the years, Alexander is an exception. Many chess players tend to be older, although Chesnut has noticed a shift in demographics since the Netflix miniseries The Queen’s Gambit came out in 2020.

“Usually everyone has associated chess with super ‘intellectual’ men,” he said. “We’ve had an explosion of new players for tournaments from this and all walks of life.”

Chesnut likened it to Bobby Fischer’s run in the 1970s that inspired people to get into the game.

“I think you could say that chess is having a renaissance,” said Chesnut.

Alexander said he hopes his success will encourage other young people to take up chess. The word he kept coming back to when describing what he thought about chess is “fun”.

“It’s just been fun for me since I started playing it and meeting new people through tournaments,” Alexander said. “It was just a lot of fun.”

If you want to keep an eye on Vermont’s education news, sign up here to receive a weekly email with all of VTDigger’s coverage of higher education, early childhood programs and K-12 education policy.