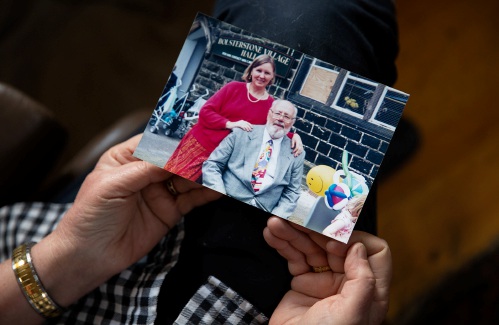 LEBANON – Norwich resident Susan White mourns the loss of her husband, Rev Kenneth Cracknell, who died on October 26 at the age of 87 after testing positive for COVID-19 during an outbreak at Hanover Terrace Health and Rehabilitation Center .

That outbreak, which ended Nov. 1, affected 39 residents and 10 employees, according to the New Hampshire Department of Human Services.

Cracknell, who had Parkinson’s disease and had lived on Hanover Terrace since 2019, declined before contracting COVID-19, but White said she believes he could still be alive without the virus.

Before COVID, Cracknell was “still present, active and talking,” White said in a phone interview. “We did the crossword and all that stuff. And then he got very, very sick.”

White said it “sounded like he was drowning” and eventually his throat became so clogged he couldn’t eat or drink.

“I’m always disturbed when people say, ‘Well, we’re kind of done with COVID, and it’s going to be a little inconvenience,'” said White, who is herself immunocompromised and continues to wear masks indoors and out when she’s around is other people. “I think people have dropped their vigilance.”

Elsewhere in the Upper Valley, Lebanon Center Genesis and Sullivan County Nursing Home in Unity have seen deaths from COVID-19 in recent weeks due to outbreaks at the facilities. However, nursing home officials say it is difficult to determine when residents died of or with COVID.

Although the virus still causes illness and disorders, immunizations and treatments are mitigating the severity of the disease and the number of deaths that facilities were seeing at the onset of the pandemic. Meanwhile, ongoing staff shortages mean facilities are leaving some beds vacant and paying costly travel workers.

“I think the number of positive cases that we’ve had in the last few months or six weeks has kind of surprised us,” Sullivan County manager Derek Ferland said of cases at the Sullivan County Nursing Home in Unity.

The outbreak included cases among 48 residents and 19 employees, according to Thursday’s weekly COVID-19 update from the New Hampshire Department of Health and Human Services. Two residents died.

According to Ferland, the rise in nursing home cases appeared to coincide with a rise in the community at large.

“That was our third big wave,” Ferland said, adding that he’s still not sure “what the ‘new normal’ is.”

According to the November 10 report from the DHHS, 25 residents and 26 staff members were affected by the outbreak at Lebanon’s Genesis center. One person died. The Elm Wood Center in Claremont, also owned by Genesis, also had an ongoing outbreak, affecting nine residents and four staff members as of Thursday.

“Our thoughts and prayers go out to the family of a resident who died while receiving end-of-life care at the Lebanon Center,” Mayer said. “Others generally had mild symptoms or were asymptomatic.”

Three years on from the pandemic, healthcare providers have a better understanding of the virus and more tools to deal with it, said Dr. Gina Fernandez, interim director of geriatrics at Dartmouth Health, in an email Wednesday.

“We can now offer vaccines and have more treatment options for our most vulnerable patients to prevent serious illness and death,” she said, noting that both Vermont and New Hampshire have among the highest vaccination rates in the country among nursing home residents belong – more According to a recent AARP survey, more than 80% in each state have received both primary series and booster shots. However, less than 45% of nursing home residents in the twin states are up to date on their vaccinations and have received the latest booster, according to AARP.

Jake Leon, a spokesman for DHHS, pointed to vaccination rates as the reason the state is seeing fewer infections, hospitalizations and deaths related to outbreaks at long-term care facilities than it did during the peak of the pandemic. Deaths recently hit a seven-day average of nearly three deaths a day, but that’s a far cry from the average of 12 a day the state recorded as of Dec. 25, 2021, according to DHHS’ COVID-19 data dashboard .

Although facilities cannot accept new admissions to affected units, Leon said, “The department is not hearing from hospitals that transfers to inpatient care are currently more difficult than in previous months due to COVID-19 cases and outbreaks.”

Deaths and serious illnesses may have declined since the peak of the pandemic, but nursing homes continue to face challenges related to the COVID-19 pandemic, Fernandez said. For example, treatment options such as nirmatrelvir-ritonavir or paxlovid may not be appropriate for residents who are taking multiple medications that have drug-drug interactions, or who have swallowing problems who cannot swallow pills that cannot be crushed. The alternative remdesivir, while effective, must be administered intravenously for three days, which poses a significant challenge given ongoing staff shortages.

Brendan Williams, president of the New Hampshire Health Care Association, which represents dozens of nursing homes in the state, said people in the community who want to do their part to protect those hardest hit by COVID-19 are being vaccinated and empowered be able. as he has.

“That would be helpful,” he said.

During the recent Sullivan County nursing home outbreak, the facility has had to limit visitation in some cases and require visitors to wear more personal protective equipment. It also had to restrict access to certain units at times.

“Depending on the extent of the outbreak, our footage may be limited or halted altogether,” Ferland said. If all cases are on one unit, the state could allow one facility to continue accepting admissions to other units, he said.

If the Sullivan County facility “just had a moratorium, our revenue would just be slaughtered,” he said.

At the same time, he said, the nursing home doesn’t want to take in new residents, putting them at risk of contracting the virus.

“It’s very dynamic,” he said. “Everyone is trying to do their best” to manage what “can sometimes be competing priorities.”

Hiring continues to be an issue for the facilities, which may have to take beds offline due to their inability to provide adequate staffing levels. But Leon said those challenges are not related to COVID-19 outbreaks.

Nursing homes in the region continue to struggle with staffing issues. They often rely on expensive traveling labor to fill gaps in permanent, full-time employment. Despite this, many are unable to provide sufficient staff to keep all of their licensed beds open, which can cause backlogs of hospital discharges that can cause bed crunching there.

“We have so many agency nurses with us right now,” Ferland said. “It’s the only reason we can stay afloat. It’s very expensive.”

Williams of the New Hampshire Health Care Association said the staffing situation in New Hampshire’s nursing homes is “critical” at this time, leading to a “hunger games” Situation where facilities compete with traveling nursing agencies for the same workforce.

“I just don’t know when we’re going to get back to normal,” he said. It’s a “race to the bottom in keeping staffing levels up”.

He pointed to a few other states where nursing home closures have prompted policymakers to respond by increasing reimbursement rates. While New Hampshire hasn’t experienced any closures, Williams said any beds offline due to staff shortages “would be equivalent to closing multiple facilities.”

For the most part, nursing homes are doing whatever it takes to care for those currently in their care, Williams said.