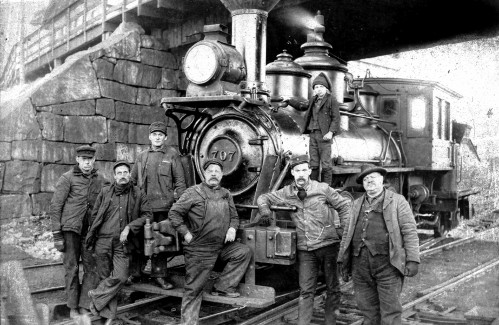 Sometimes stories have happy endings, sometimes they don’t. Concord is a place steeped in history, a story that lives on with every person who walks our streets every day. We pass buildings that hold memories centuries old, walk streets that existed centuries ago, see a landscape where our ancestors worked and toiled to earn a living. There are even times when we live with the story, but we don’t realize we’re that close to a story that needs to be told. Travel back with me into the history of the Boston & Maine Railroad in Concord, New Hampshire.

In the 19th century, our ancestors witnessed the arrival of the very first passenger train in our small town. They welcomed the arrival of the railroad with great fanfare, for it made travel more convenient and brought many employment opportunities to the city. Over time, our railway history in Concord evolved into many decades of growth with the addition of a large depot and full marshalling yard in southern Concord. The railway brought opportunities, but also hope for the future with up to 32 passenger trains arriving every day. Trains carrying passengers in their carriages, passengers spending money in our community and further boosting our economy. Trade certainly benefited from the railroad and our community grew beyond early expectations. The railroad brought people to Concord, and unfortunately the railroad took people with it. Many tears were shed at the Concord Train Depot as our young soldiers and sailors left their families as they departed for war. Many of these soldiers and sailors never returned to the train depot in Concord, the very last memory of their beloved soldiers and soldiers was simply a sepia photograph with a long forgotten soldier waving from a carriage as he exited the train depot.

Our Concord Railroad Yard was a city unto itself, consisting of dozens of acres, it was the place where the railroad manufactured locomotives, performed routine maintenance and complete overhauls. Hundreds of Boston & Maine Railroad employees worked at the marshalling yard, focusing on whatever was needed to keep the railroad running.

It was with great sadness that Concord’s railroad era ended after our ancestors’ largest employer finally ceased to exist. The coveted rail passenger service entered a period of slow decline. People traveled on airplanes and then jets to reach their intended destinations. The railway experienced a continuous decline and tried to adapt to the changing times. The large Concord Railroad Depot was demolished in 1959, rail passenger service to Concord ceased in 1967, and the railroad eventually went bankrupt in the 1970s. The marshalling yard was closed in time and eventually fell into disrepair over the years, with few of the original buildings remaining today.

Even today we have hidden memories of a great railroad history in Concord. These exist in the form of houses that our residents still live in today. It’s not widely known, maybe not even to the people who live in those houses, but the past is indeed still with us. The Boston & Maine railroad cars, commonly referred to as railroad houses but generally uncommon without much recorded history, still live in our community.

It was in 1947 that the Boston & Maine Railroad decided to retire 40 of their used carriage cars sitting in the rail yard here in Concord, simply railroad cars that dated back to the early 1900’s used to haul passengers. Passengers included many from across New England, including many of our soldiers and sailors from World War I and World War II. The 40 carriages had to be disposed of, where there’s a will, there’s a way.

James Ross was the Acting Inspector of the Boston & Maine Railroad here in Concord. He was aware that Deutsche Bahn wanted to dispose of the 40 wagons quickly and efficiently. Ross pondered the railroad’s dilemma and devised a plan that would help the railroad and the return of war veterans while making a profit. James Ross formed a new company and called it Ross Associates. Ross Associates then bought the 40 railroad cars and set about converting them into homes, nice little homes that met the demand for affordable housing as the population grew after the war. The veterans were able to use their benefits and fund homes in local banks, all guaranteed by the federal government.

I find the concept very intriguing and certainly beneficial for those in need of housing. Ross Associates was able to buy the trainers at a fair price and market them to the returning veterans. It certainly sounds like a winning combination for all involved and has had great support from Ross, the local banks, the Boston & Maine Railroad and the community.

I am aware of two existing railroad car houses in Concord that were built by Ross Associates in 1947 using two of the 40 cars purchased by the railroad. Today, one is on the corner of Ellsworth and Chase Streets and the other is on South Street in Concord. The disposition of the remaining 38 railroad cars purchased by James Ross is unknown, they may or may not have become homes in other New Hampshire towns 75 years ago. Maybe the people living in it are aware of this unique history, maybe not.

When Ross Associates’ first railroad car house was completed, a ceremony was held, a grand opening of sorts. It was said that 5,000 people attended the opening of the railway house on the corner of Ellsworth and Chase Streets. The house was quickly sold and the new family was delighted with a new home, which consisted of a railway carriage. The car was disassembled into three parts at the Concord Railroad Yard and transported to the construction site. On site, the railroad car met the carpenters as they joined the three sections of the car in a “U” shape, built a gable roof over the curved car roof and added insulation. The finished interior of the new coach house included a small apartment-style kitchen, a living room measuring 18ft by 9ft, and two bedrooms, one measuring 11ft by 9ft and the other 10ft by 9ft. A full bathroom has been added – with no basement or attic.

During the well-attended Concord opening, the public witnessed some telltale signs of the house’s former use as a railroad car. There was a definite curve between the ceiling and the walls, the original carriage windows were boarded up and plastered. Vertical mahogany planks, a remnant of the railroad car, twined around the base of the house.

Many of our ancestors who visited the new living concept said they couldn’t tell the house enjoyed a previous life as a railroad carriage. Others saw the resemblance. A woman in the audience said the new home was certainly designed by a man and not a woman, noting the smaller kitchen.

The Boston & Maine Coach, now a residence in Concord Heights, was once known as B&M Coach No. 480 known. This simple railway car with a rich history. Repurposed in the most efficient way to benefit many people. I find it comforting to think that B&M Coach #480 has returned home to the community he once served so well.