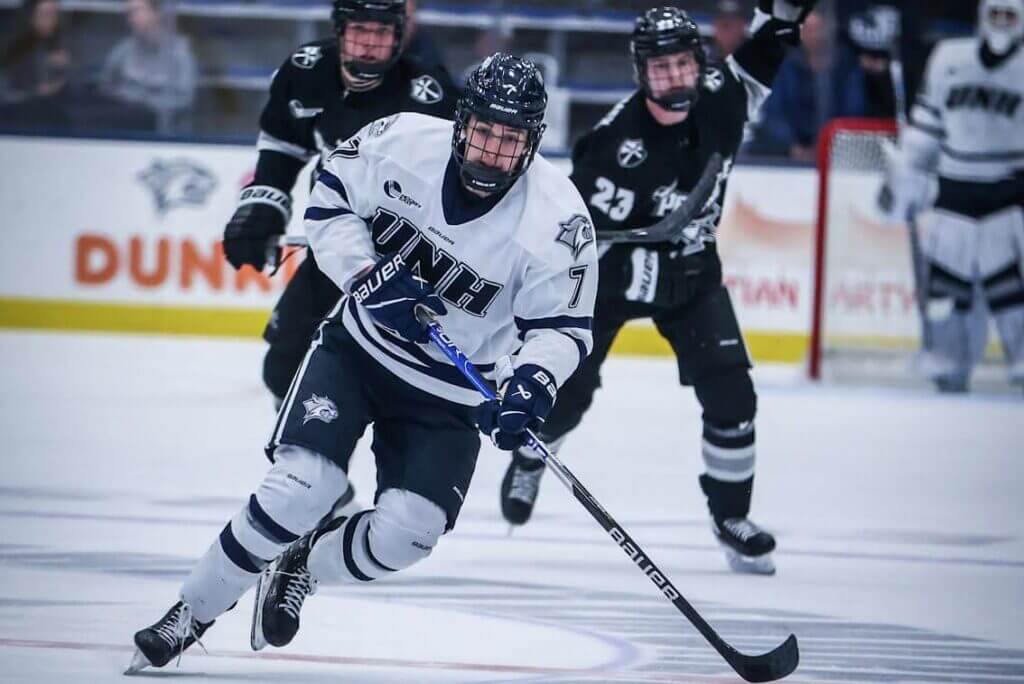 DURHAM, NH — Stiven Sardarian entered the media room at the University of New Hampshire’s Whittemore Center Arena in a blue suit and button-down shirt. Sardarian, a native of St. Petersburg, Russia, and the 2021 Buffalo Sabers third-round pick, has been in the United States for a little over a year. He is already fluent in English. His physique is slim. He apologizes if he doesn’t understand certain words or questions, but Sardarian’s focus and conviction are evident both on the ice and in conversation.

Sardarian’s path of development is not ordinary. After being drafted, he could have stayed and played in Russia until he got an entry-level contract and then made his way to North America to play in the NHL or AHL. But education is important to Sardarian’s family, and he saw the challenge as an opportunity. He wants to play hockey seriously here and would like to acclimatize quickly.

“First, I want to play in the NHL,” Sardarian said. “I want to get smarter too. It’s a good decision to be in the NCAA because I can study well there and play really good hockey. When UNH invited me I was in Russia and I was thinking, but I made the right decision. I’m happy to be here.”

Durham is a small college town 20 minutes inland from the New Hampshire coast and about an hour and a half north of Boston. It’s a remote destination but home to a school that plays in Hockey East, one of the toughest conferences in college hockey. The fan base is a dedicated one.

Sardarian has embraced everything about the path he has chosen. He spent last season in Youngstown, Ohio playing in the USHL. He went to school every day to fulfill an English requirement for his visa. He missed UNH’s summer sessions due to visa issues but has been doing his best to catch up since arriving on campus in September. He wants to speak English as much as possible and has had no trouble earning coaching points. He meets with an English as a second language tutor every week.

“The boy wants to be a player,” said UNH coach Mike Souza. “The path he chose with Buffalo’s encouragement, he must live it. He had to go to Youngstown. He also had to come to UNH in a not easy way. … He was willing and did everything with a smile.”

Souza was first tipped off about Sardarian by a scout at another organization. He and his staff have not been able to see him in person because of COVID-19 travel restrictions. Souza doesn’t have much experience in recruiting Russian players. It can be a tricky exercise because a team has to trust that a player is ready to go all over the world to play college hockey. It’s easier and much more common for a Russian player to stay at home and develop in one of Russia’s junior leagues. But UNH was reassured that Sardarian’s family placed a high value on education and that he would consider the college path.

That he even thought about it says something about who Sardarian is. Hockey development is complicated enough. Packing your bags at 18 and leaving the only home you’ve ever known is one thing. Then flying halfway across the world to Youngstown, Ohio to play in a junior league is a dream chase few can comprehend.

As Souza watched Sardarian, his stick work caught the eye. So does his brain. He was thin but creative. He was occasionally pushed around, but could also win stick fights. Souza said Sardarian is “wiry strong” but has to spend a lot of time on the strength coach because his game is breaking down due to his lack of strength. Without a full summer on campus, Sardarian was behind the curve. He doesn’t have a point yet, but he’s shown potential.

“I think the most insightful thing for him was the pace and you’re up against kids who are maybe 24 or 25 years old,” Souza said. “The biggest adjustment was the pace and the strength. When the game slows down, it’s really effective. What I’m looking forward to is seeing him get stronger and pick up the pace. He can see games that other guys can’t see. He sees the next game. He always sees the next game. If we can improve his ability to do that by getting stronger, he’ll be faster and make more plays.”

Over the weekend of this call, UNH played a home-and-home game against Northeastern and reigning Richter Award winner Devon Levi, another Sabers prospect. On Friday, Sardarian had two potential assists in one shift in a 6-2 loss to UNH in Boston, but Levi blocked the shooter on both chances. At the end of the game he came on after the final whistle with a Northeast defender.

Two good setups from UNH rookie Stiven Sardarian (7) in the same shift… but Devon Levi out there Devon Levi-ing in the northeast net. pic.twitter.com/25nRFbO2G3

The next night, Sardarian missed UNH’s 3-0 defeat. He watched the game from above with Sabers development coach Tim Kennedy, who was visiting in town. Souza said the Sabers development team was a huge help in getting Sardarian through the immigration process and that it was great to work with them on Sardarian’s development plan. This buy-in is important as this is a challenging route for a teenager. There are only eight Russians in college hockey this season.

“Put yourself in his shoes,” Souza said. “There are other people who have done it, but it’s just not the normal path. This would not be possible without the support of the Sabers.”

The Sabers have selected six Russian-born players in the last two drafts, including four in the first three rounds. General manager Kevyn Adams has great faith in Russian scout Ruslan Pechonkin, who is tasked not only with identifying talent but also building relationships with players once they’ve moved in. Of the six Russian players drafted by the Sabers over the past two years, three are playing in North America while three are still in Russia. Aleksandr Kisakov is the first of the group to make it to the AHL.

Sardarian is keen to spend more time in Buffalo. He has watched as many Sabers games as he can and loves watching Tage Thompson, Rasmus Dahlin, Owen Power and JJ Peterka. His plan is to also be at the Sabers development camp next July and that will be his first opportunity to meet players in the organization.

However, plans for the off-season are difficult to pin down for Sardarian. With Russia’s ongoing war in Ukraine, any journey home is complicated. Minnesota’s Kirill Kaprizov was among the NHL’s Russian players who had a difficult journey back to North America after spending the offseason in Russia. Kisakov missed Sabers’ development camp because he was still in Canada to work out visa issues. As of now, Sardarian plans to go to Spain in May, to Buffalo in July for development camp, and back to UNH for gym time. That could change, but Sardarian doesn’t expect to be able to make a trip home. He said since he was at school he has spoken to his parents “not much, but enough”.

Right now, he’s focused on fitting into the UNH dressing room. The Wildcats have another player who speaks Russian. Kristaps Skrastins is from Latvia and helped Sardarian when he needed to translate. But the two prefer to talk in English.

“It’s difficult but very important for me to talk a lot,” Sardarian said. “I’ll make mistakes, but I don’t care. people understand. people help me I need to talk to people more and never be afraid. I think after this season, this year, I’ll be good. My language improves little by little every day.”

Sardarian grew up playing competitive chess and has always been a problem solver. The UNH coaching staff could immediately see how smart he was from the way he did his classwork while adapting to the language and culture. Souza also noticed Sardarian’s brain at the rink.

“We New Englanders like to talk fast,” Souza said. “He gets picked up when we throw something on the board or in the room, he picks it up without any follow up. If it’s a new exercise or concept, he gets it right away. He’s an intelligent person.”

Sardarian is proud of that. He said his two favorite players are Nikita Kucherov and Artemi Panarin because he thinks both play the game smartly and have a passing ability that he hopes to cultivate. He admits that playing in North America was a big adjustment. He had eight goals and 17 assists in 46 USHL games last year but has yet to score in college hockey.

“In Russia we have bigger ice rinks,” he said. “If you have a bigger rink, you have more time. It is easier. In the US we have a smaller rink and I think US hockey is harder than Russia because the people are stronger, play hard and are so fast. You have to make quick decisions.”

Sardarian’s raw skills are evident on the ice. He needs more strength in everything he does, including skating. But he’s confident with the puck on his racquet and is showing signs of becoming a setup artist. If you choose the path that Sardarian has chosen, patience is of the utmost importance. He’s evolved on and off the ice since the Sabers drafted him, but most of his work still lies ahead.

“The biggest thing for us with him is just getting married to our strength coach,” Souza said. “His game will change as he gets stronger. His brain and stick are really good. He just breaks down because he’s not that strong. We’re excited and I know he’s looking forward to being here next summer. Not that I want to write off this year because he might still be productive this year. But I think his game will go to another level as he gets stronger. I think he gets what’s the best part about it.”

(Photo by Stiven Sardarian courtesy of the University of New Hampshire)