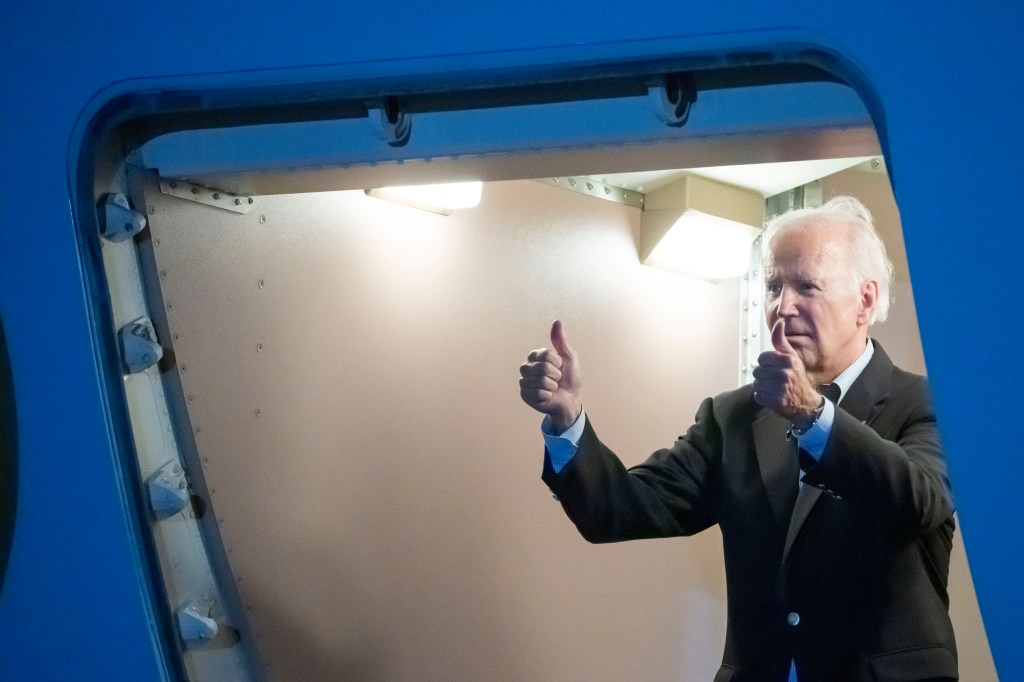 It’s been said – not often, but sometimes – that 80 is the new 60. But for the nation’s (by far) oldest president, 80 is the new 150. Biden is 80 and moving on … take away the car keys and lock him in the memorial wing of the local assisted-living facility.

Let’s look at Biden’s recent comments. As always, all dialogue is guaranteed verbatim.

One of Dementia Joe’s constant targets is big business, or as he put it, “the 55 biggest of the 55, 55 of the biggest companies.”

And what exactly did you do, Brandon?

“The same companies spent $20 billion to buy back their own stock and most importantly, a buyback, the most significant buyback in nearly a decade.”

May we quote you on this, Mr President?

With any subject, confusion abounds and only gets worse.

On the campaign he forgot the name of the governor of New Mexico. (She has three names). He praised Oregon Senator Ron Wyden, couldn’t remember his name seconds later, and instead described Wyden as “that other guy I was just talking about.”

He spoke about his visit to Florida after “Hurricane Ivan.”

He wished Nancy Pelosi’s husband “Bobby” a speedy recovery. (His name is Paul.)

At the age of 80, Biden cannot read the simplest words from the teleprompter. The word “ban” comes out as “blan”. He tries to urge people to vote, but says “Veto” instead. Inflation is rendered “Implation”. Supreme Court Obergefell decision (gay marriage) comes out as “Ogilfry”.

He called Intel “Inkel” and recalled meeting “the Chee-EO”.

He also recounted meeting GM’s CEO, “Amy Barrett.” No, Mr. President, this is the Supreme Court Justice. They met with Mary Barra, but whatever her name was, at least she had some good news for the American people and their motor vehicles.

“By 3035 we will be driving completely electrically.”

And when 3035 arrives, that’s how the George Jetson vehicles will be powered — “electric charging stations across America powering the fleet to take care of the fleets of new electric vehicles… 50, sorry, 500,000 charging stations in the.” near the land.”

You may not have noticed, but the US has had Medicare since the Warren G. Harding administration.

“You see, in 1922, the price of a blood pressure drug that millions of Medicare patients rely on went up 500 percent 500 percent.”

Many are worried about the economy, but Dementia-Joe says that’s not a problem because once “the inflation law” kicks in, there will be tax credits for “a new coffee maker,” among other things.

A recession in the cards? Unlikely, says the man whose campaign bagged $5 million from crypto scammer Sam Bankman-Fried.

Then there is geography. He confused Colombia with Cambodia, North Korea with China. He called the war in Ukraine the war in Iraq. In his deranged state of mind, he confused that year’s Battle of Kherson with the Battle of Fallujah in 2004.

Slow down, Mr President, we don’t quite get the numbers. Can you repeat that?

How much money are we talking about here, Brandon? Take three, lights, camera, action.

“It will bring in $1 billion, seven, one trillion, $700 million, billion dollars in investment.”

Then there are the outright lies. His son died in Iraq. (Actually by Walter Reed). He “literally” halved the national debt “by $1.4 trillion.” (The debt is $31 trillion and skyrocketing.)

In college, he gave up a “starter job” on the football team. When he became president, gas was $5 a gallon. (Actually $2.39.) The $7 per gallon gasoline price in Los Angeles “has always been the case here.”

Blades will “blaze”, budget “buzz-it”. He drops letters in acronyms and worries about the military returning to the States with “PSD.” He denounces the waste and fraud of “PP” loans.

He urged his non-working class constituents to vote on “Nov. 9.” (Too bad more of them didn’t get the message.)

“Every other nation I know is aware of that.”

“Get the syringe, $5, $10, $20 off the net of your grocery purchase at the drugstore or at the next grocery store when you get the syringe.”

“My team at the White House posted a visio.”

“You can look it up. Like I always said, you can google it.”

happy birthday Many happy returns. Just not at 1600 Pennsylvania Avenue.