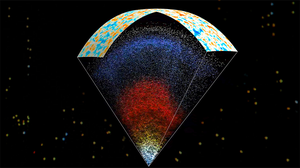 A new map of the universe reveals for the first time the span of the entire known cosmos with pinpoint accuracy and stunning beauty.

The interactive map showing the true position and true colors of 200,000 galaxies is available at http://MapoftheUniverse.net, where it can also be downloaded for free.

“Growing up, I was very inspired by astronomical imagery, stars, nebulae and galaxies, and now it’s time to create a new type of imagery to inspire people,” says mapmaker Brice Ménard, professor at from Johns Hopkins University. “Astrophysicists around the world have been analyzing this data for years, leading to thousands of scientific papers and discoveries. But nobody has taken the time to create a map that is beautiful, scientifically accurate, and accessible to people who aren’t scientists. Our goal here is to show everyone what the universe really looks like.”

The Sloan Digital Sky Survey is a pioneering telescope survey of the night sky in New Mexico. For years, night after night, the telescope aimed at slightly different locations to capture this unusually wide perspective.

The map, which Ménard put together with the help of former Johns Hopkins computer science student Nikita Shtarkman, visualizes part of the universe, or about 200,000 galaxies – each point on the map is a galaxy and each galaxy contains billions of stars and planets. The Milky Way is just one of those points, the one at the bottom of the map.

The expansion of the universe helps make this map even more colorful. The further away an object is, the redder it appears. The upper part of the map shows the first burst of radiation shortly after the Big Bang, 13.7 billion years ago.

“In this map, we’re just a speck at the bottom, just a pixel. And when I say we, I mean our galaxy, the Milky Way, with billions of stars and planets,” says Ménard. “We’re used to seeing astronomical images that show a galaxy here, a galaxy there, or maybe a group of galaxies. But what this map shows is on a very, very different scale.”

Ménard hopes people will experience both the map’s undeniable beauty and its awe-inspiring vastness.

“From that spot at the bottom,” he says, “we can map galaxies across the universe, and that says something about the power of science.”

Disclaimer: AAAS and EurekAlert! are not responsible for the accuracy of the press releases published on EurekAlert! by contributing institutions or for the use of information about the EurekAlert system.