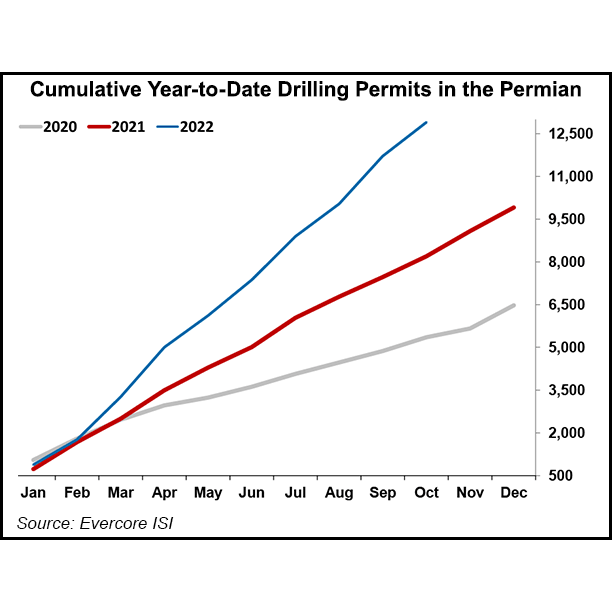 Oil and natural gas approvals in the Lower 48 slowed sequentially in October, although the monthly number of approvals has increased both on an annualized basis and compared to pre-Covid figures from October 2019, Evercore ISI data shows.

Operators filed a total of 3,308 permits last month, down 16% from September but up 25% from October 2021, Evercore researchers led by James West said in the company’s latest monthly tally. The number of permits also increased by 6% from October 2019, the researchers found.

The Permian Basin in west Texas and southeastern New Mexico led the month-on-month decline, with permits falling 486 to 1,190.

The Marcellus and Eagle Ford Shales also recorded drops of 149 and 87, respectively, compared to September.

These declines were partially offset by the approval of increases in the Powder River (up 87) and Denver-Julesburg/Niobrara (plya 70) basins and “smaller shale occurrences (up 203),” the Evercore team said.

The Powder River Basin (PRB) of northeast Wyoming and southeast Montana features prominently in the portfolios of Lower-48 players like EOG Resources Inc. and Devon Energy Corp. Devon reported in the PRB average pre-hedge natural gas prices of $8.23/Mcf for the third quarter.

Bucking the Permian permitting trend, Pioneer Natural Resources Co. submitted 104 permits in October, up 82% per month to record the highest monthly total of any operator in the basin. Pioneer is also the largest Permian producer.

The Lower 48 rig count stood at 650 on Friday (Nov. 18), down one unit from the previous week but up 38% year over year amid a tight global oil and gas market.

With demand expected to continue to exceed supply, energy bankers expect global natural gas and oil prices to continue to rise, according to a new survey by Haynes and Boone LLP.

The Energy Information Administration, meanwhile, is forecasting a combined monthly production increase of more than 500 MMcf/d from seven major onshore basins of the Lower 48 to 96 Bcf/d in December, led by the Haynesville Shale and Appalachian Basin.