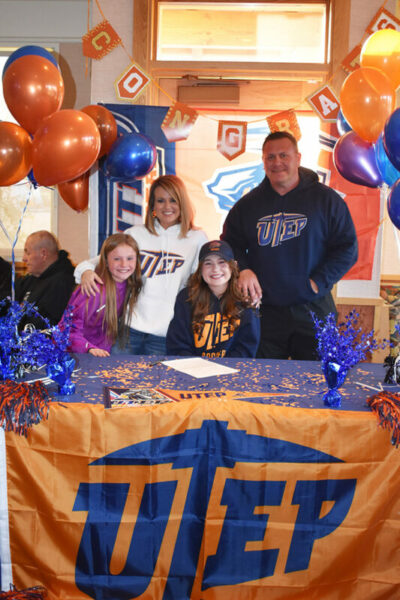 But not in the traditional way, in the school auditorium. High school wouldn’t let her, so she still attended Dion’s autograph session.

“The campus itself is just so clean and beautiful, the girls I’m going to play with are super nice, the soccer team is just so good and I can’t wait to be a part of it,” Roskos said.

While surrounded by friends and family at Dion’s Pizza near Cabezon, Roskos made her decision official by putting pen to paper.

“I’m very proud of her and can’t wait to see her join UTEP on her next journey,” said Rosko’s mother, Lisa Roskos. “She’s going to be amazing and I love her more than anything.”

Normally, MOU signings take place in the high school classrooms, but Rio Rancho High School said “no” that Roskos attended the day of the school’s signing.

“It was quite disappointing, she played there for two years, she’s a great student, she gives back to her community and it was sad that she couldn’t sign in front of her school and her classmates,” said Lisa Roskos.

The RRHS’s athletic director told Roskos that she would not be able to attend the school’s signing day as she was not currently a member of the team.

“We tried to speak to as many people as possible to see if they would change their minds, but we understand and respect that rules are rules,” said Lisa Roskos.

Olivia Roskos played varsity football for the Rams in her sophomore and junior years and made a personal decision to sit out her senior year to prepare for her collegiate career.

She has been playing soccer since she was five and for many of those years was coached by Rio Rapids Soccer Club’s Simon Rothman, who was there to celebrate her signing.

“There’s a very small percentage of kids who can do what they’re going to do, especially in New Mexico, especially if they go into a Division One program,” Rothman said. “I think it should be an achievement that it’s recognized by them.”

Since Roskos was unable to attend Rio Rancho High School’s book signing day, her friends and family decided to organize their own book signing event to celebrate all of Roskos’ hard work.

Dion’s was filled with people, energy and love – a day Roskos will never forget.

“I’m very grateful, very grateful that all these people came to support me,” Roskos said. “It means a lot to me.”