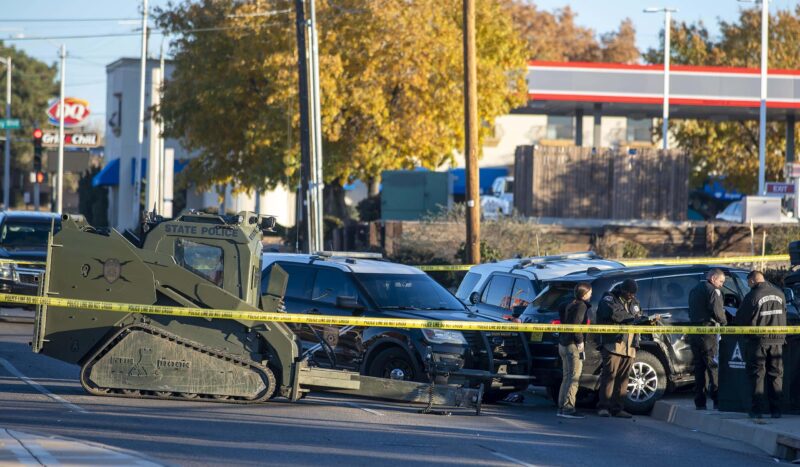 Two New Mexico state police officers shot dead a man they said was armed with a machete early Thursday morning after an hour-long overnight standoff at the entrance to a Smith grocery store parking lot in northeast Albuquerque.

The man’s name has not yet been released pending notification of his family. The officers are on administrative leave, which is customary, and their names will be released after the multi-agency task force investigating the shooting interviewed them.

The encounter began just before 11 p.m. Wednesday when a state police officer pulled over a suspected drunk driver who was driving without his headlights on and who, according to a department spokesman, swerved onto the lane. The driver stopped at a Chevron gas station in Montgomery and Louisiana NE.

“When our officer contacted the driver of the vehicle, he immediately noticed multiple knives and what appeared to be drug paraphernalia,” State Police Chief Tim Johnson said in a briefing Thursday morning.

He said the officer who stopped traffic was trained in crisis intervention and “able to develop a rapport and have decent communication” with the driver. A second officer placed tire deflation devices under the driver’s Jeep SUV.

“After several hours of talking and negotiating this issue, the male driver decided to take what we believe to be illegal drugs,” Johnson said. “Then he reversed his vehicle and collided with one of our units.”

The driver fled, but because his tires were deflated, he crashed into the curb of the Smith’s grocery store across the street, a state police spokesman said.

The driver refused to exit his car, Johnson said, and the state police SWAT team arrived to help. A member of the crisis negotiation team was also on the scene trying to resolve the situation, he said.

Officers used a flash explosive device and “chemical munitions,” and eventually the driver came through the passenger door around 3 a.m. Thursday.

“Unfortunately, he escaped with a machete,” Johnson said. “Tactical officers first attempted to apply less-lethal beanbag rounds to the issue. We’re still investigating, successful or not, but I’m assuming that wasn’t the case, as a short time later two of our officers fired their service rifles, hitting the suspect, who is now deceased. Thank God our staff is fine.”

After investigating the incident, the case will be referred to the 2nd District Attorney’s Office.

“Obviously a very unfortunate sequence of events, but I would like to take a moment to commend our staff for appearing to have spent more than three hours out there in the freezing cold trying to communicate and negotiate with this suspect to do so peacefully.” to solve,” Johnson said.

This is the 22nd shooting by law enforcement in Bernalillo County this year, but the first by the New Mexico State Police, according to the Journal’s records. Albuquerque police shot 17 people, killing nine. The Bernalillo County Sheriff’s Office shot three people, all fatally. And the US Marshals Service shot a person.