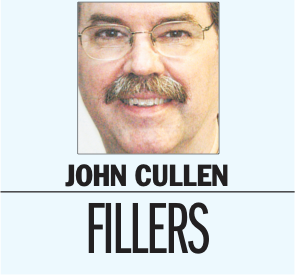 An expert is someone from abroad who tells you what you already know.

By that standard, last weekend Art and I were the experts for the New Mexico Press Association, which invited us to make three presentations at their annual newspaper conference in Santa Fe.

We spoke to the journalists about surviving in today’s newspaper environment, investigative reporting and how Art won the Pulitzer Prize for editorial writing. They didn’t throw any rotten tomatoes at us so we felt like we nailed it.

The trip allowed us to reconnect with a longtime friend and colleague, Wanda Moeller, vice president of advertising at the Albuquerque Journal, the state’s largest newspaper. Wanda is a Buena Vista College graduate who began her newspaper career here in Storm Lake in the mid-1980s before moving up to jobs in southeastern Iowa, North Carolina and Minnesota’s Iron Range. She then moved southwest to New Mexico, where she attracted the attention of the city’s major newspaper as the editor of a weekly newspaper with notable sales success. Now Wanda runs the journal’s advertising department and oversees its several weeklies.

In 1982, when newspapers were at their peak, the Journal built new facilities on a 1,500-acre, campus-like industrial park that it developed as the Journal Center. Nowadays, the newspaper doesn’t need that many employees anymore, so some of its buildings stand empty. Meanwhile, New Mexico has attracted film production to its state, and these buildings on the Journal campus are now frequently featured in Hollywood productions. Many scenes from the popular TV series Breaking Bad and its spin-off Better Call Saul were filmed in these buildings, as well as other TV shows and movies. Up to three different productions are filmed simultaneously in the Journal buildings. A large adjacent parking lot offers space for the actors’ trailers and the vans for the film equipment.

So that’s what we have in common with the Albuquerque Journal. We also had a film made in our office – last year’s documentary about us and our community, Storm Lake.

There are about 40 newspapers in New Mexico compared to nearly 300 in Iowa. They’ve put out some good publications, and while the landscape is very different—New Mexico is arid and mountainous—we share many of the same concerns, such as dwindling water resources and maintaining the momentum of our hometown newspapers. Santa Fe and Taos are artist communities and home to a growing number of art lovers. We met a lot of nice people there and hope we can spend more time visiting their magic land.

Flying used to be an adventure. Now it’s an ordeal. As I was going through security at Epley Airfield in Omaha, the TSA confiscated a can of shaving cream from my suitcase because it was on the prohibited carry-on bag list. I didn’t know Foamy could be a weapon.

A hot dog in the airport costs $6. A bottle of water was $4. Those are Yankee Stadium prices. But once you get through security, you’re trapped.

We flew Southwest Airlines from Omaha to Denver, where we changed planes to Albuquerque. The last time I flew through Denver was in 1971 at the old Stapleton Airport in the city. It was replaced in 1995 by the sprawling land-based Denver International Airport, which has continued to expand since then. We did our exercise hiking what felt like a mile from Gate C26 to Gate C56. Epley Airfield is much more manageable.

The attendant on one of our flights, as we prepared for takeoff, advised us over the PA system: “Sit back, relax and enjoy the flight. Or you can sit up straight and tense. It’s your choice.” I tend to fall into the second category, but I’m getting better.

This reminds me of another announcement a Southwest flight attendant made on one of my previous flights: “You’re in luck today. The pilot plans to perform some acrobatic maneuvers during takeoff.”

Each of the four flights was packed with people. We never got a window seat. In fact, Art and I never sat together because when we got in there were only individual seats left, and they were generally middle seats. That’s okay. But it was annoying when the person at the window closed the blind. I like to look outside and make sure the wing is still attached. Why take the window seat when you can pull down the shade and not allow the rest of us to look at those wings?

And of course, on the flight from Denver to Omaha, I sat right in front of the crying baby whose parents seem to have never heard of pacifiers. Luckily, the flight only lasted an hour, and that’s exactly how long the child stayed.

Everyone has their stories to tell about flying. That was mine.

John Cullen is the founder and retired editor of the Storm Lake Times Pilot. He can be reached at [email protected].