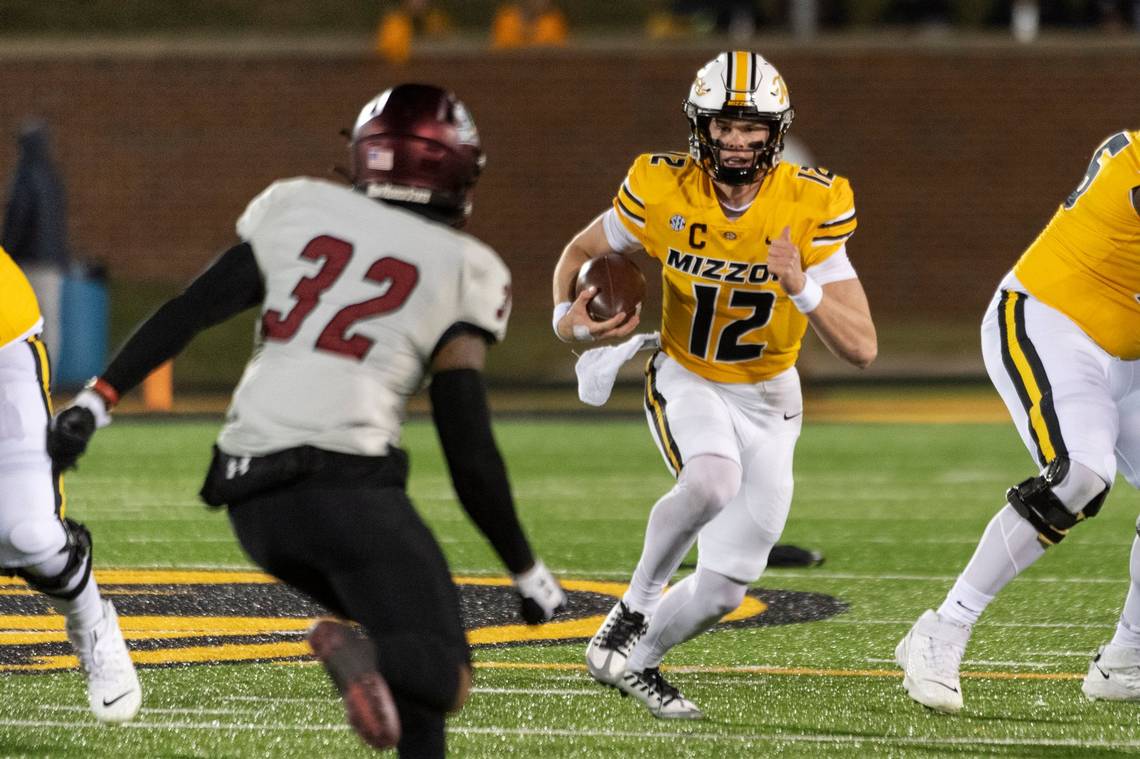 The Missouri Tigers are a win from bowl eligibility with one game remaining.

The 45:14 victory outside the conference over the state of New Mexico in Colombia made sure of that on Saturday evening.

The Tigers (5-6, 2-5 SEC) scored a trio of touchdowns in the first half and returned defensively a week after being beaten 66-24 by the Tennessee Volunteers in Knoxville, Tenn back to their miserly ways.

Mizzou true freshman wide receiver Luther Burden provided a couple of highlights on Saturday when he threw a defender into the end zone for a touchdown and Aggie broke some ankles on his second, but plenty of MU players — both upper and lower tier players — at the Contributed to Senior Night at Faurot Field.

Late in the game, with the score in good hands, Mizzou fans even got their first glimpse of highly-touted real-life freshman quarterback Sam Horn. The Collinsville, Georgia native eased second starter Brady Cook, who threw for three touchdowns before taking a deserved bench seat with his team 42-7 in the fourth quarter.

Saturday’s matchup against the FBS Independent Aggies, coming to Conference-USA next year, came on time for a Missouri team that needed wins in two remaining regular-season games over the weekend to nudge the six-win-bowl threshold reach.

With one failure, another must go…and it’s the Tigers taking on a well-known SEC rival: Team Arkansas Razorbacks, for which former MU head coach Barry Odom is the defensive coordinator.

Beat the Hogs in a Friday afternoon game the day after Thanksgiving at Faurot Field next week and Missouri can get serious about bowl picks.

During his over three-quarters action on Saturday, Cook was efficient in both passing and running football. He was 11 of 19 for 149 yards and two touchdowns with five carries for 54 yards in the first half. Cook finished night 19 of 27 for 251 yards, those three TDs and 71 yards with seven carries.

The outcome of the game was never very doubtful. Mizzou came on with a throw at 6:14 of the first quarter, Cook hit Burden for a 12-yard touchdown play, the latter ending with a pounce on Aggie at the goal line.

Cody Schrader scored the Tigers’ second touchdown early in the second quarter with a 2-yard run, and their third was a 32-yard follow-up from Cook to Ryan Hoerstkamp’s tight end. Redshirt newcomer Hoerstkamp showed some moves of his own on the nifty catch-and-run touchdown, the first of his MU career.

The Tigers put on 260 yards of offense by halftime, and they did it with a balanced ratio: 149 yards through the air, 111 on the ground. Mizzou surpassed 400 total yards early in the final third and finished with 443 yards.

Missouri took the ball first in the third quarter, 21-0, and got back to work. Barrett Banister made a nice one-handed touchline catch that went 17 yards before Cook completed passes to Banister and Burden to put the Tigers in the red zone.

After Schrader invaded the 5 of the Aggies, the senior rusher immediately got the call again. He put his head down and rumbled into the end zone for his second touchdown of the game. Another extra point from Harrison Mevis sailed through the post and Missouri led 28-0.

A juking Burden scored MU’s fifth touchdown on a 14-yard pass from Cook with less than a minute left in the third quarter, and redshirt freshman defenseman Daylan Carnell bit Pavia for a pick-six with 12:41 in the game.

Senior place kicker Mevis was good on his only field goal attempt from 43 yards and made all of his extra point attempts.

The Aggies scored their two TDs on a 10-yard run by sophomore running back star Thomas at 4:29 in the third quarter and a 13-yard keeper by relief QB Gavin Frakes at 4:21 in the game.

Horn, the promising freshman quarterback from Missouri, finished his first collegiate appearance 0-2 (a pass to Banister near the goal line was nullified by a penalty elsewhere on the field) and a carry for 10 yards.

Amidst this Tigers’ ups and downs season, Saturday night’s shows and results will be enjoyed in CoMo. But Friday’s Battle Line Trophy game will no doubt be a lot tougher for Missouri.

Arkansas knocked out No. 14 Ole Miss 42-27 on Saturday to record its sixth win of the season. And while the Tigers will be very motivated to qualify for a bowl, the 6-5 Razorbacks – who secured their own eligibility on Saturday – will aim to improve the quality of their postseason task.