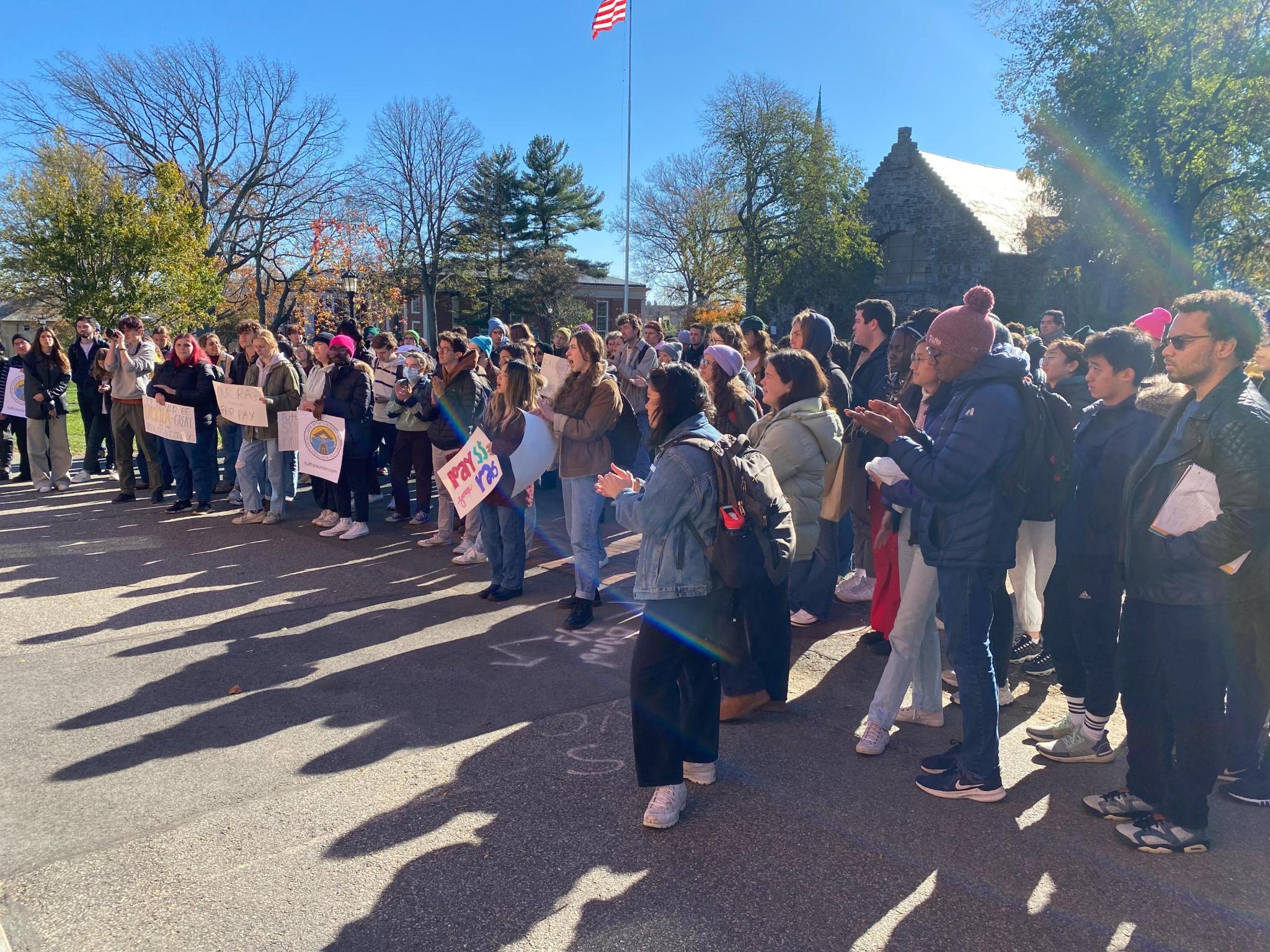 On November 14, Tufts University students demonstrated in support of the United Labor of Tufts Resident Assistants, known as UTLRA, the Resident Assistants who are organizing to unionize. Within just two weeks, 85% of approximately 140 Tufts RAs signed union cards. Tufts RAs are demanding fair compensation, more clarity and voice in their job responsibilities, and a say in their working conditions. They applied for Tufts’ voluntary recognition on November 9, which the university refused on November 16.

David Whittingham, a junior at Tufts and a freshman RA at Carpenter House, shared: “People’s biggest concern has been compensation. RAs don’t get paid over and above the home loan and we don’t get any other fringe benefits like a meal plan… A lot of people live in dormitories where it’s not really logistically feasible to cook for themselves, so kind of a sideline of the job [you] have to sign up for a meal plan just to have access to groceries.”

He added: “I think the compensation structure is exploitative. It allows the university to get away with essentially free work from students they know have few other options who can’t afford to live in the area, especially here in Boston where rents are so exorbitant .”

RAs struggle not only with compensation, but also with unclear job expectations. New duties and responsibilities are often added. Whittingham shared: “In general, there is some ambiguity in our contract as RAs are expected to have a high degree of flexibility. By unionizing, we’re trying to have clearer expectations and generally have more say at work.”

Julie Francois, Tufts Junior and sophomore RA at Bush Hall, said: “For me, having a voice about our jobs and creating a workplace that generations of RAs that will come after us will be proud of and safe in be able. Additionally, I want the next generations of RAs to just have more say in their jobs, get better compensation, and not have to go through the lack of visibility that we’ve had. And also job security.”

Tuft’s RAs are organizing amid a wave of student and worker organizing across the country, including graduate unions at MIT, Yale, the University of New Mexico, and Indiana University, among others. Undergraduate workers are also becoming increasingly organized, with Grinnell students winning their union elections and Wesleyan RAs achieving voluntary union recognition.

“I was inspired by what the RAs were doing at Wesleyan… It was definitely a great source of inspiration to know that it’s possible and that it can be done,” Whittingham said of the students’ other organizing efforts.

Francois agreed. “I was definitely inspired by Wesleyan. It kind of feels like a whirlwind. It’s crazy to think that this only lasts a few months. I feel like I’m still trying to find my place in it, but I’m honored to do my part to get a union here at Tufts and to give RAs a voice in their work here.”

Industrial struggles are often the first struggles in which working people engage, showing them their collective power, particularly in the US where most workers are non-union. On average, unionized workers receive higher salaries, better benefits and better job security than their non-union counterparts.

“I think our generation is really socially conscious and we’re at a time where we’ve come out of the pandemic and I feel like we just want more out of life and don’t really want to accept things that we have that from feel like we don’t want them. I didn’t necessarily deserve that,” Francois continued. “Now is the time to raise our voices and fight for what we want, especially in our workplaces.”