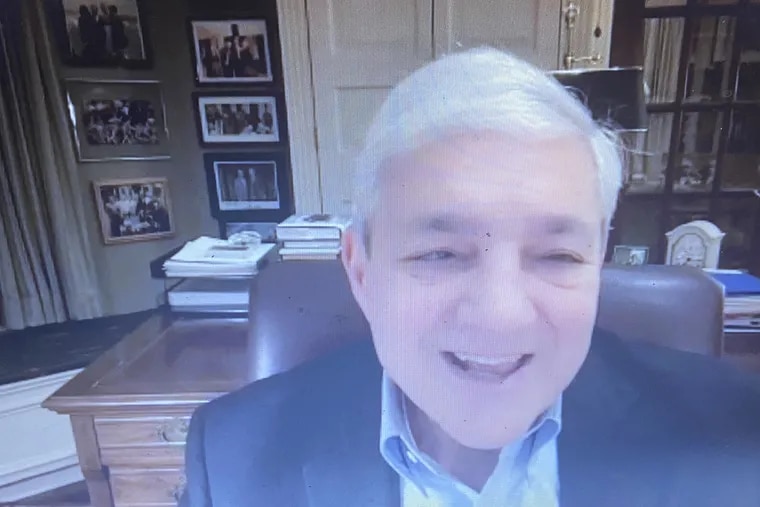 In a suit jacket and collared shirt, Graham B. Spanier looked very much like the college president he once was, and spoke of his state college study, a desk, a stack of books, and a lamp as the background.

And to top it off, he was there to talk about a book he had just written.

“First of all, let me thank you all for your interest, but also for your support,” the 74-year-old Spaniard said in front of about 60 people who had gathered at the Zoom call to hear his presentation.

But this was not a book about the usual academic or college presidential fundraising book. in the The Lion’s Den: The Penn State Scandal and a Rush for Verdict, Spanier tells his side about Jerry Sandusky’s child abuse scandal and its aftermath – and keeps it up he and two other former university administrators have been falsely accused and unfairly treated and blamed by the criminal justice system and the media University leadership for failing to correct the narrative.

The 493-page book, published by Gryphon/Eagle Press, chronicles his 10-year odyssey, including a trial in 2017 and a series of appeals that ensued, earning him a two-month sentence at the Center County Correctional Facility on child abuse charges two more months of house arrest. Spaniard, who ran Pennsylvania’s flagship university for 16 years before resigning in 2011 as the scandal unfolded, found himself in a yellow jumpsuit subjected to strip searches – he survived 39 of them, he writes – and almost a week of solitary confinement.

Despite being convicted of child endangerment, Spanier claimed he was unaware of Sandusky’s sexually abused boys and that the former coach’s behavior with a boy in a campus shower was described as “mischief” to him. Neither he nor other administrators notified police and instead planned to inform Sandusky’s children’s charity, The Second Mile, banning Sandusky from bringing boys onto campus and requiring him to undergo counseling. Prosecutors later discovered an email that Spaniard wrote at the time: “The only downside for us is if the message isn’t ‘heard’ and not acted upon, and then we become vulnerable for not reporting it.”

During his 90-minute presentation, Spanier offered his views on current university leadership, the decision of then-Attorney General (now Governor-elect) Josh Shapiro to press for a prison sentence, and what he thought the university should do for the late football coach Joe Paterno. and his ongoing relationship with Tim Curley and Gary Schultz, the other administrators convicted in the case.

Spaniard, who said he’s worked as a consultant in the national and global security arena, said he’s personally given 30 presentations about the book since it came out two months ago and about 15 more are in the pipeline. One topic that readers found most interesting was the chapter on his imprisonment.

He writes extensively about his experiences in prison, which he described as dehumanizing.

“I had some knowledge of our justice system before I was imprisoned, but my firsthand experience has opened my eyes to its deep flaws,” he wrote. “Our justice system is broken and I have to work for change.”

He later said in an email that he shared his impressions with the district commissioners’ chair and district administrator, as well as an official at the Pennsylvania Prison Society, and met with people who started and participated in a “prisoner journalism project.” have Pennsylvania Innocence Project, which works to help people who have been wrongly accused and imprisoned.

But on a lighter note, he wrote how he looked forward to Friday nights when prisoners could buy ice cream for $3.75 in commission money. More precisely, cappuccino crunch.

He also wrote that he found meaning in his stay by becoming “a resident listener and advisor” to some and answering questions about college admissions.

“I helped an inmate refine his small business idea, a way for inmates to send flowers to loved ones,” he wrote.

But Spanier said he never wavered at his decision not to go through with a plea deal and of his few regrets he wished he had taken a stand against the advice of his lawyers during his trial.

He also spoke about former Gov. Tom Corbett, whom he said he wanted rid of before the Sandusky scandal broke, and slapped Louis Freeh, the former FBI director that Penn State hired to investigate what’s happening and whose report Spanier says he was falsely accused of conspiring to cover up Sandusky’s abuse, a charge he was found not guilty of in court.

Shapiro, he said, insisted he was serving time in prison despite recently undergoing open-heart surgery and battling prostate cancer amid an ongoing COVID-19 pandemic.

“I’m not a friend of his, but I found him to be a pretty good attorney general in practically every way,” Spanier said of the governor-elect. “He just made one big mistake, the one that affects me.”

As the scandal unfolded, Spanier said he had lost 25 pounds, couldn’t sleep and was suffering from depression, but was empowered by the emails he received from alumni, donors and friends.

He has remained close to Curley and Schultz, whom he described as “two of the best people I know,” noting that he had lunch with Schultz and spoke to Curley on the phone that day.

About Paterno, who was fired from the board and later died of cancer, Spanier said the university should never have pulled down his statue and put it back up. In the book, he also talks about his ongoing relationship with Paterno’s wife, Sue, who he wrote inserted a written prayer for him in the cracks of the Western Wall in Jerusalem and gave him a St. Jude’s candle to light.

He spoke highly of current Penn State President Neeli Bendapudi, former president of the University of Louisville, starting in July.

“I told her I would do anything to help her and the board members,” he said.

He said he has no plans to run for Penn State’s Board of Trustees, but will remain committed to the school. Even since losing his post as president, he has visited dozens of donors, urging them to keep donating to the university, raising tens of millions as a result.