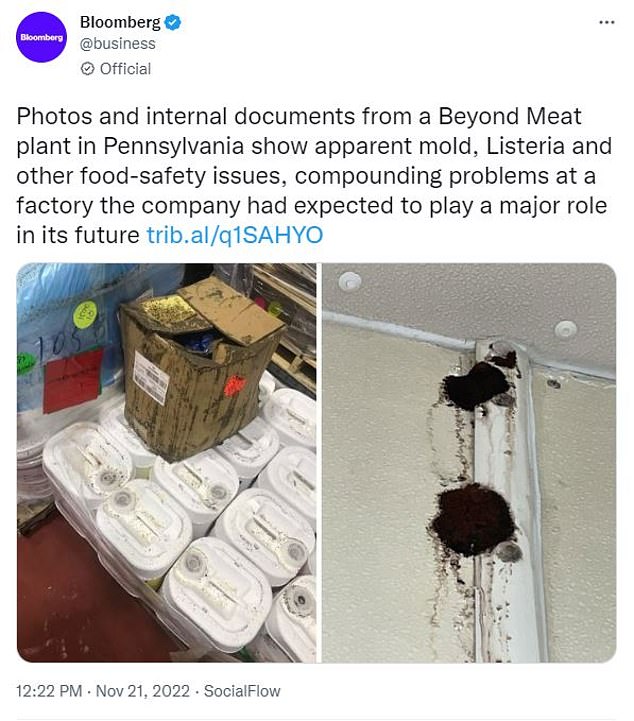 Beyond Meat’s processing facility in Pennsylvania could be riddled with bacteria — leaked documents claim listeria and mold have been found at the facility 11 times in less than a year.

Listeria, a foodborne bacterium, was detected in the plant in the second half of last year and the first half of 2022, according to Bloomberg, which viewed the documents.

A spokesman for Beyond Meat told DailyMail.com that the Pennsylvania Department of Agriculture conducted inspections at the facility in March 2022 and September 2022 and found “no instances of non-compliance.”

However, the leaked documents claim there was unsafe use of equipment, mold on walls and ingredients, and non-food items had contaminated the meat substitute, including metal, wood, string and plastic.

Leaked internal documents and photos (pictured) claim to show mold at a Beyond Meat plant in Pennsylvania. The documents claim listeria and mold were found 11 times at the facility in less than a year

The facility is located in Devault, which is 45 minutes outside of Philadelphia.

The Bloomberg report noted that the information came from unnamed sources who said food products had tested positive for Listeria.

Beyond Meat refuted the allegations in the Bloomberg report, with a spokesperson saying the operating conditions were “strict and in excess of industry and regulatory standards.”

A spokesperson for Beyond Meat told the DailyMail, “Beyond Meat’s food safety protocols go beyond industry and regulatory standards and we are confident in the food we produce is safe. ‘

However, if they are correct, images shared with Bloomberg tell a different story.

One shows an upside down trolley at a manufacturing facility that appears to be processing the meatless meat, and another shows containers with obvious mold.

Photos allegedly taken in April show ingredients on the floor covered in dirt and an unidentified liquid, while another shows mold growth on the wall “inside the facility,” reports Bloomberg.

While Beyond Meat said the facility was inspected in March and September, the leaked documents claim the last Listeria incident was identified in May.

Listeria is eliminated from food during cooking, but most Beyond Meat products, such as hamburger patties and sausages, are sold raw. 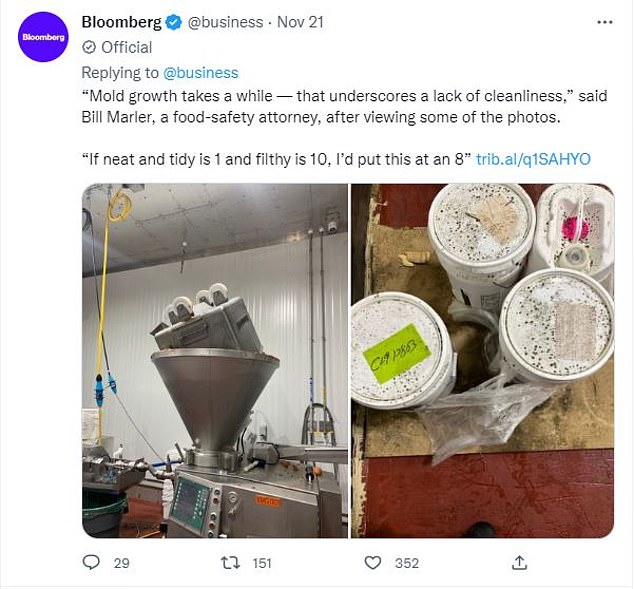 Listeria, a food bacterium, was detected at the facility in the second half of last year and the first half of 2022 and there is obvious mold

Martin Bucknavage, a food safety expert in Pennsylvania State University’s Department of Food Science, told Bloomberg that it would be “highly unusual” for Listeria levels to be reported in the internal document.

“Although we’re seeing snapshots, there’s enough that we’re seeing a lot of cleanup that needs to be done,” Bucknavage said after viewing photos of inside the facility and the list of Listeria tests.

Bucknavage, looking at the photos, said it was difficult to determine the story behind the dirty ingredients because they could be in an area with discarded items.

He further explained that a company still wouldn’t want something that dirty in a factory that processes food.

A spokeswoman for the Pennsylvania Department of Agriculture told Bloomberg that a Sept. 21 visit to the facility was not to conduct an inspection, Beyond Meat told DailyMail.com, but was related to the facility’s unpaid registration. 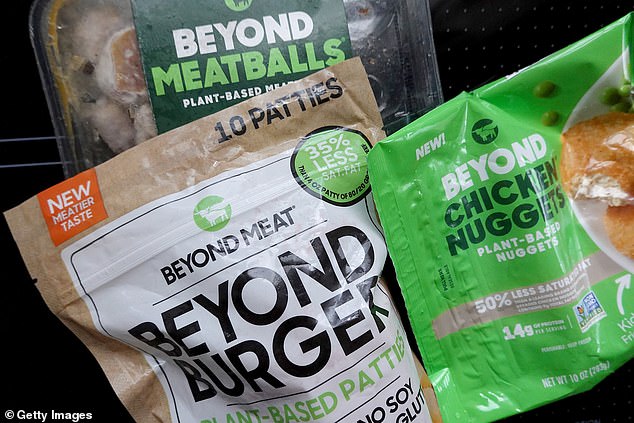 A spokesman for Beyond Meat told DailyMail.com that the Pennsylvania Department of Agriculture conducted inspections at the facility in March 2022 and September 2022 and found “no instances of non-compliance.”

The U.S. Food and Drug Administration has not inspected the facility since Beyond Meat purchased it, an FDA spokesman told Bloomberg.

The leaked documents follow news that Beyond Meat has seen its earnings drop significantly.

Estimates for Beyond Meat’s second-quarter sales have fallen 10 percent over the past three months, according to data from Refinitiv IBES released in August.

And the company reported a $100 million net loss in May.

Beyond Meat seemed poised to dominate the artificial meat market after announcing a three-year partnership with McDonald’s in early 2021, as well as deals with big fast-food companies like KFC, Dunkin’ Donuts, and Subway.

But none of the trials have resulted in long-term success, with many Beyond Meat partners either not expanding their plant-based options to more restaurants or dropping menu items.

In September, Beyond Meat executives announced that its chief operating officer, Doug Ramsey, 53, was suspended immediately for allegedly biting a man on the nose.