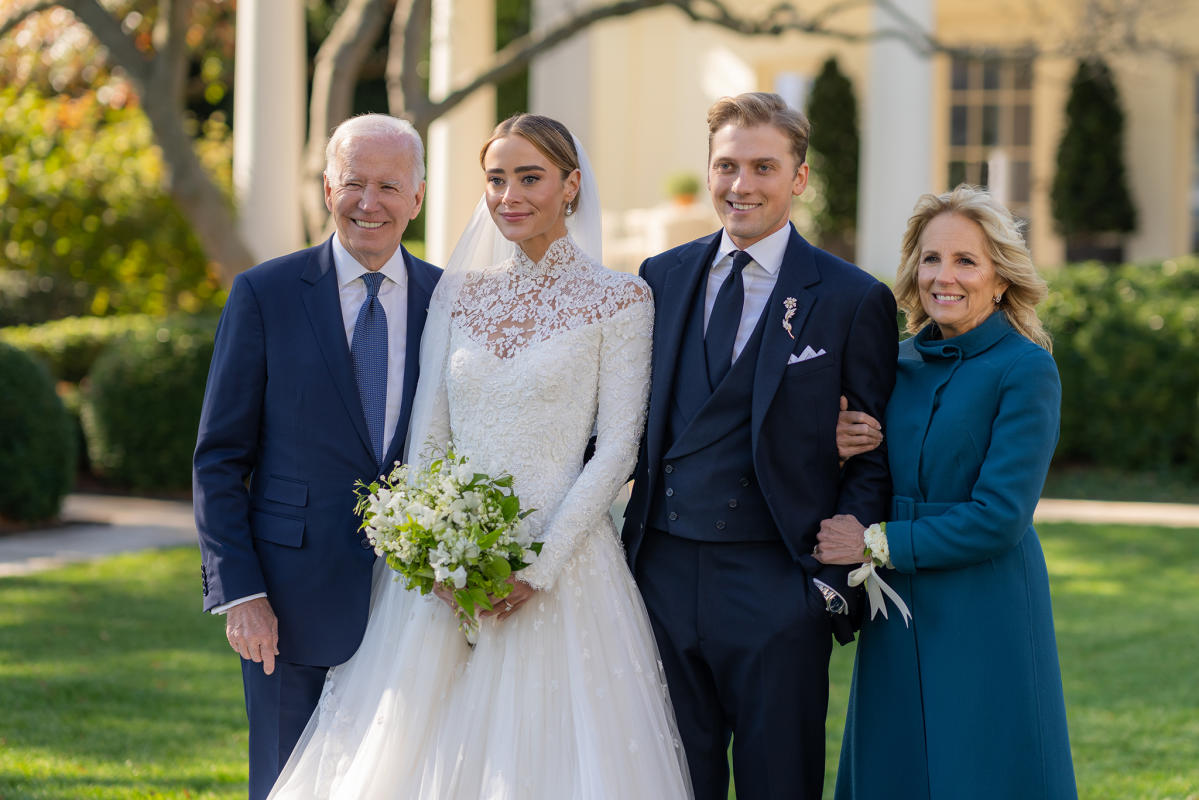 Naomi Biden and Peter Neal became the 19th couple to exchange vows at 1600 Pennsylvania Avenue on Saturday, and they did so in high style. Big time. The 28-year-old bride chose an extravagant, custom-made Chantilly lace gown from the Ralph Lauren Collection with hand-placed organza petals along the bodice and skirt for Saturday morning’s ceremony. Her new husband, 25, was also outfitted in a three-piece suit by the designer.

A spokesman for Ralph Lauren confirmed that the pair wore the designer’s creations on Saturday afternoon.

Biden’s choice gave her access to a very select club, joining the celebrity ranks of Priyanka Chopra, Lily Collins and more recently Jennifer Lopez, all of whom wore wedding dresses designed by the billionaire designer. Lopez topped them all, however, and donned three custom Lauren dresses for her wedding to Ben Affleck last summer. In hindsight, Neal and Biden’s attendance at the designer’s fall fashion show at the Museum of Modern Art in New York may have been a sign of their intentions.

The site of the private affair — the South Lawn — was a first for White House weddings. After exchanging their vows, the couple posed for photos on the South Portico of the White House, with Biden’s massive veil floating like a sail in the wind. According to industry sources, stylist Bailey Moon has been scouring designer showrooms and connecting with a variety of resources to coordinate a plethora of options for the wedding, reception and some pre and post events. The parents of the President’s eldest granddaughter, Naomi Biden, are Hunter and Kathleen Buhle, who divorced in 2017.

Moon did not take media inquiries ahead of Saturday’s main event, nor did event planner Bryan Rafanelli or photographer John Dolan. The same goes for representatives from Prabal Gurung, Badgley Mischka and a few other designers who were said to be in the mix of guests. Rafanelli attended Chelsea Clinton’s 2010 wedding and his portfolio includes state dinners during the administration of President Barack Obama.

Dolan, who published the aptly named The Perfect Imperfect wedding photo book last year, was one of several writers at the wedding. The bride’s mother debuted If We Break: A Memoir of Marriage, Addiction and Healing in June, and her father released his memoir Beautiful Things last year.

Like many Gen Z brides, Biden didn’t want to be a one-hit wonder on her wedding day and had arranged another custom designer choice for the after-party. There was no word on what she wore for Friday night’s rehearsal dinner at the Renwick Gallery. The dark-haired attorney is expected to wear a custom-made dress by Markarian’s Alexandra O’Neill at today’s White House reception. This independent, women-founded brand based in New York gained international attention after first lady Jill Biden wore a blue tweed coat with velvet lapels and matching dress by the previously little-known brand.

Naomi Biden’s bridal choice will have an impact on brides-to-be, as high-profile weddings routinely create fashion trends and interest in the labels worn. It’s also approaching the start of peak engagement season – Thanksgiving to New Year’s Eve – with 19 percent of all engagements occurring in December. The bridal market continues to rebound as many couples who had postponed or postponed weddings during the pandemic carry on with their celebrations – and often splurge. Globally, bridal wear is expected to generate $61.1 billion in sales this year, growing to $69.9 billion by 2026.

Naomi Biden, who earned her bachelor’s degree from the University of Pennsylvania and a law degree from Columbia University, lived in New York for a time before moving to the Beltway, where she and Neal lived in the White House. Her sisters Maisy and Finnegan know Markarian after attending one of O’Neill’s fashion shows.

Biden didn’t play out her bridal side for the official ceremony. In an Instagram photo posted by Neal of the couple holding hands beneath a ruffled white bow, she wore a white blouse, white heels and black jeans at the District of Columbia Marriage Bureau. Neal wrote, “I need to nail the money shot to secure the license to marry.”

To ensure she and her bridesmaids looked impressive during their hair and makeup prep, the bride-to-be reportedly gifted them ivory satin pajamas by Morgan Lane. Perhaps that hint came from social media, as the much-publicized Nicola Peltz took a similar path with her bridesmaids before marrying Brooklyn Beckham. Ivy Getty also opted for Morgan Lane loungewear on her wedding day.

However, none of the designers involved in dressing the bridal shower and first family have been open about sharing pre-wedding news. Creatives involved in Saturday’s wedding were required to sign NDAs requesting anonymity, according to some sources.

So what’s it like partying at the White House? Those who did are reluctant to say it publicly. Obama’s former White House photographer Pete Souza married Patti Lease in the Rose Garden in 2013. But Souza turned down an interview request to discuss what the last White House wedding was before this weekend. Former first daughter Jenna Bush Hager married in Texas and hosted a reception at the People’s House a month later. Like Souza, she declined to comment last week.

Public fervor for White House weddings doesn’t seem to have waned since another former first daughter, Patricia Nixon, married Edward Cox there in June 1971. Such was the interest that such incidental details as the couple’s choice of wedding anniversary breakfast from Cream of Wheat and the official recording speed – 10 seconds per shot – were shared with the media. Nixon (whose rep did not confirm an interview request Friday) chose a wedding dress from Boston’s Priscilla, as did her sister Julie and another first daughter, Luci Baines Johnson, for their respective weddings

But that summer of 1971 affair could still take the cake — literally. The old-fashioned lemon pound cake weighed 350 pounds and stood 6 feet, 10 inches tall. At a pre-wedding press conference in June this year, Le Perigod chef Henry Haller likened cutting to “throwing a sword into a bull”.

Cox, who celebrated her 50th anniversary last year, once described the wedding as “the happiest day at the White House for her family.” She said in an interview last year, “My dad was right when he said, ‘It was a day that we’ll all always remember because we were all beautiful and just happy.'”

The Biden family is celebrating another milestone on Sunday — a birthday brunch to mark the president’s 80th birthday. The merrymaking continues Monday afternoon when First Lady Jill Biden will be ready and awaiting the arrival of this year’s official White House Christmas tree — one grown in Pennsylvania — featuring Kelly Hokanson, wife of the Office of the National Guard General.