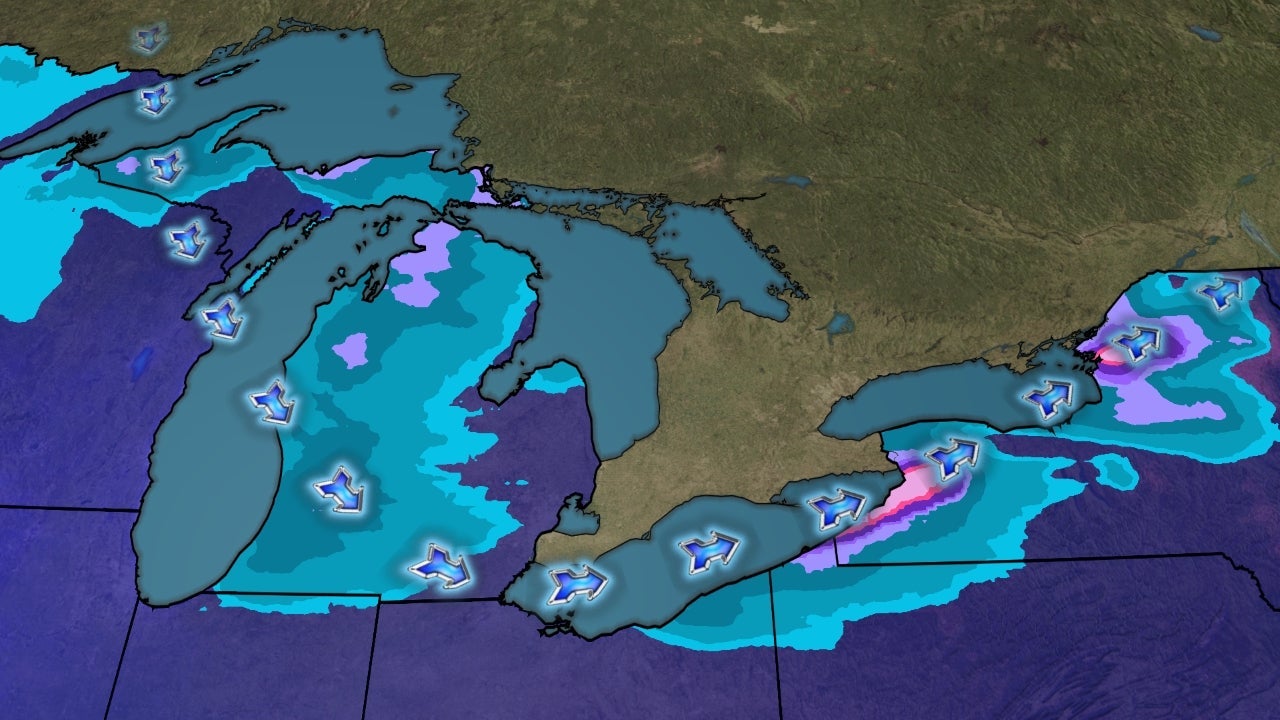 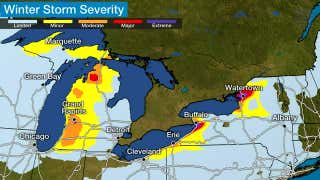 Heavy lake-effect snow will continue to batter the Great Lakes snow belts today, including the Buffalo metro area, where the snowfall measured in feet could potentially make this a historic storm.

An intense lake-effect band of snow that formed on Lake Erie Thursday night continues to hit areas near and south of Buffalo.

Snowfall rates of two to three inches per hour and thunderstorms have been observed in this band.

Here are some top snow totals near and south of the Buffalo area as of 6:00 p.m. EST:

Has heavy snowfall in the area closed part of the New York State Thruway from exit 53 to 59.

Farther north, the peak total of a band that developed off Lake Ontario yesterday near Williamstown, New York, produced up to two feet of snowfall. A new band of snow has formed and is affecting Watertown and Fort Drum, where up to 42 inches of snow has piled up.

Lake effect snow warnings are in effect east and southeast of Lakes Erie and Ontario in western and upstate New York, northwestern Pennsylvania and far northeastern Ohio. These alerts include Buffalo and Watertown, New York and Erie, Pennsylvania.

Major to extreme impacts are expected in some of the areas that are being warned, according to NOAA’s Winter Storm Severity Index.

In the Lake Erie snow belt, a heavy snow band will begin hitting areas from near Buffalo north to Niagara Falls on Saturday. The band should weaken slightly as it shifts north, providing a break for the Buffalo metro area sometime Saturday afternoon. A cold front will move through Saturday night into early Sunday, pushing this band south again over Buffalo before finally fizzled out.

Elsewhere, another intense band of snow is expected to turn north from the eastern end of Lake Ontario into Canada by late Saturday, but return south before the end on Sunday.

Snowfall totals of several feet are expected from this multi-day blow in the Buffalo metropolitan area, as well as along portions of the Interstate 81 corridor in upstate New York and the Tug Hill Plateau. Up to 5 feet of snow could fall locally in parts of the Buffalo metro area.

Keep in mind that the map below shows the forecast for additional snow on top of what has already fallen.

At least 6 inches of additional lake effect snow is also likely along the I-90 corridor in northwestern Pennsylvania. Up to 10 inches is possible over much of western Lower Michigan and the Lake Superior snow belts of Michigan’s Upper Peninsula and far northern Wisconsin.

Traveling along these routes with whiteout conditions within the heaviest snow bands will be treacherous if not impossible at times.

Buffalo, New York is one of America’s snowiest major cities. A little over 95 inches of snow is averaged in Buffalo each year.

This blizzard has the potential to dump 25 to 50 percent of the city’s average annual snowfall in just a few days.

According to NOAA’s historical database, Buffalo’s December 10, 1995 1-day snowfall record was 33.9 inches 2, 3 and 4 day blizzard records were from a late December 2001 snowstorm. These measurements were taken at Buffalo-Niagara International Airport, located northeast of downtown. Buffalo’s southern suburbs or Southtowns often see the heaviest amounts of snow in a lake-effect blizzard.

Up to 88 inches of snow buried the Buffalo Southtowns, a record for the region.

A 132-mile section of the New York State Thruway (Interstate 90) was closed for several days.

“There were 14 deaths in this storm, hundreds of large roof collapses and structural failures, thousands of stranded motorists, and isolated food and gasoline shortages due to impassable roads,” Buffalo’s National Weather Service wrote in a post-storm summary.

In 2000, two feet of snow in the days leading up to Thanksgiving trapped thousands on streets, in schools or businesses in what the National Weather Service said was the most disruptive storm in the Buffalo subway since the infamous 1977 blizzard.

It is not certain if this event will be a repeat of these two major storms. But it has this potential.

Do not travel to these areas during Storm Heights. If you absolutely must travel, let others know about your plans and carry a winter survival kit in your vehicle in case you get stranded.

Why such a severe Lake Effect storm?

A sharp southward dip in the jet stream will persist from eastern Canada through the Midwest and Northeast. This will keep a pipeline of cold air wide open from Canada across the Great Lakes.

This cold air will flow over the much warmer waters of the Great Lakes. This contrast of cold air over warmer lake water will create bands of lake effect snow along the leeward shores of the lakes known as the Great Lakes Snow Belt, from western and upper Michigan to northern Indiana, northeast Ohio, northwest Pennsylvania and in West and Upstate New York.

This is a common pattern that usually emerges in late fall and early winter.

(​MORE: Five extreme winter weather patterns to watch out for)

But there are reasons this will be a more productive snow event in some places.

First, the Great Lakes are very warm in mid-November, in large part due to this one of the warmest starts to November on record. Lake Ontario is at its warmest in at least 27 years in mid-November, according to analysis by NOAA, shown below. In mid-November, Lake Erie is the second warmest since the mid-1990s.

The warmer the water, the more unstable the air is when coupled with the cold air flowing over it. Air can then rise into the clouds more quickly and produce snowfall more efficiently.

In this case, the instability could be extreme enough to create heavy snow bands, sometimes accompanied by thunder and lightning, causing snowfall rates of several inches per hour.

Second, the winds are expected to line up along the longest axis of both Lake Erie and Lake Ontario.

In this case, lake effect snow takes the form of a solid 100+ mile band of heavy snow, as opposed to multiple bands of lighter snow.

After all, this event will last several days. That means if the single, long band of heavy snow stalls over a given area, several feet of snow are likely to pile up.

The Weather Company’s primary journalistic mission is to report on breaking weather news, the environment and the importance of science in our lives. This story does not necessarily represent the position of our parent company, IBM.