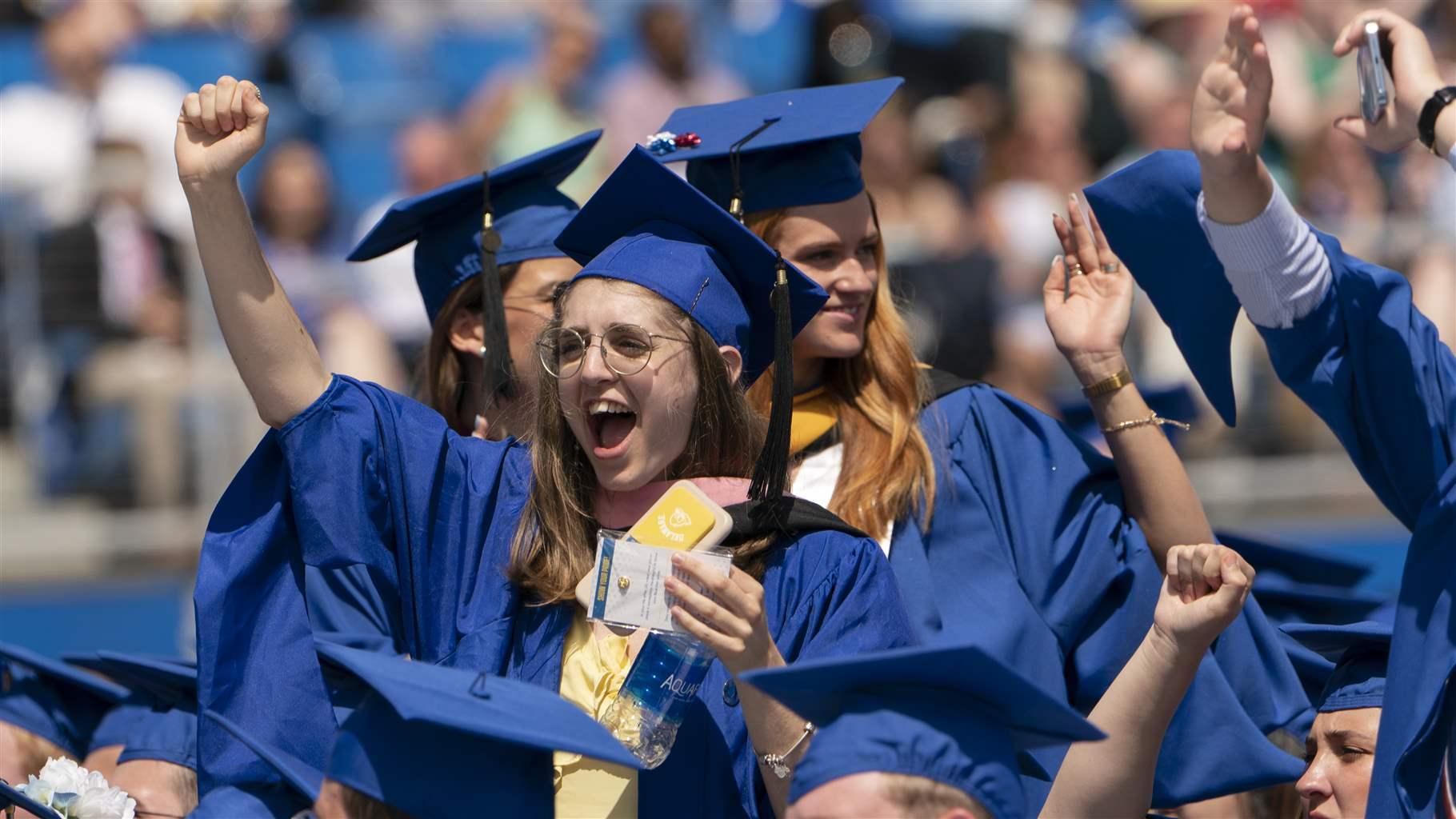 To solve the problem, some states have turned the accounts into automated programs that help all families — especially the disadvantaged ones — envision and save for a college future for their children.

The moves come at a time when even relatively wealthy families are struggling to afford college. Adjusted for inflation, the average cost of tuition, housing, and fees at U.S. public colleges and universities increased about 64% between the 2000-2001 and 2020-2021 academic years, from $13,005 to $21,337, according to the National Center for Education Statistics.

California officially launched CalKIDS in August, the nation’s largest savings account program for children. CalKIDS will automatically set up college savings accounts with initial deposits of up to $100 for every baby born in California on or after July 1, 2022. In addition, a deposit of up to $1,500 will be made for each of the 3.4 million low-income students in grades 1 through 12th class.

“We’re trying to create a higher education culture that is inclusive of all in an equitable way, especially for the underserved and underrepresented in higher education,” said Martinez, one of the principal architects of CalKIDS.

Since 2013, at least five other states — Illinois, Maine, Nebraska, Pennsylvania, and Rhode Island — have also introduced automatic college savings accounts with starting credit for every child born or adopted in the state. Nevada offers savings accounts for all kindergarten children in public schools.

Universal children’s savings accounts are a complicated obligation for states because the programs are expensive and each account can last 20 years, forcing states to track individual deposits, balances, and withdrawals for decades.

Child savings accounts are often structured with state 529 plans that allow parents or family members to save for higher education in tax-advantaged accounts. Wealthier families tend to have more resources to pour into 529 plans.

Child savings accounts, also called child development accounts, involve an initial or starting deposit from a sponsor — such as a state or city government, community group, or foundation — and may require parents to sign up for a 529 to access the deposit.

According to Prosperity Now, a nonprofit dedicated to promoting racial and ethnic economic justice, as of the end of 2021, about 1.2 million children in 39 states and the District of Columbia had child savings accounts.

In 2013, Maine became the first state to automatically introduce a universal child savings program, several years after the private Alfond Scholarship Foundation began giving $500 to every Maine newborn whose parents enrolled. Maine found that attendance was a barrier to participation.

Since then, 36% of Maine families who received a scholarship have also opened 529 accounts for their children, and 73% of those families have contributed to the accounts, said Colleen Quint, president and CEO of the Alfond Scholarship Foundation.

“That’s a much higher rate than before the program was implemented,” she said. “Part of our model is to start at birth. It’s really important to have an impact on families. It says someone else values ​​my child and cares about my child.”

While Maine has a private foundation to foot the bill, other states struggle to pay automatic child savings accounts.

“The biggest challenge facing a state is where the money will come from?” said Julie Peachey, Pennsylvania’s assistant treasurer for consumer programs. “Politically, it helps if every child gets it and it’s not taxpayer money.”

Funding for Keystone Scholars comes from over 529 fees supplemented by philanthropic support. There is no tax money involved.

Michael Sherraden is the founding director of the Center for Social Development at Washington University in St. Louis, Missouri. Sherraden, sometimes credited as the grandfather of child savings accounts, proposed universal child development accounts with additional deposits for the disadvantaged in 1991.

“Universality is important for long-term stability,” he said, adding that programs that serve families at all income levels — not just low-income residents — tend to be politically more popular.

For example, Andrea Talty, who lives near Belfast, Maine, and is a vice president of a healthcare company, said her state’s program encouraged her to put college funds aside early.

“I’m a saver, but it would never have occurred to me to save the day my first daughter was born,” she said. She found out about the Alfond Scholarship while she was in the hospital with her newborn second daughter. She has her three children, now 9, 12 and 15, enrolled in Maine’s 529 plans and saves regularly.

“Nobody can afford the cost of education,” she said. “Everyone has to use all available programs.”

This state will hire you – no college degree required

A primary focus of automatic child savings accounts are lower-income families who may not believe that higher education is in their children’s future.

“California is telling our students that we believe they’re college stuff — we don’t just believe it, we’re going to invest in them directly,” Democratic Gov. Gavin Newsom said in August when announcing the launch of CalKIDS.

California will enroll the child, open the savings account, and make the first deposit without parental involvement. However, it will incentivize parents to make additional financial deposits by registering online and making their own deposits at brick-and-mortar banks.

Other states are also using child savings accounts to close the inequality gap while maintaining universality. Democratic Illinois Gov. JB Pritzker signed an education package in June that includes a provision that allows the state to deposit money when funds are available, more than the $50 per baby approved in the original child savings program for babies born into financially insecure households as of January 2023.

But Wisconsin lawmakers this year failed to pass a bipartisan bill that would have instituted a 401(K)ids program, like an IRA with modest state-funded payments for every baby in the state. The savings could have been used to pay for higher education, buy a first home, start a business, or fund a future retirement plan.

The bill failed to gain support in the state Senate after state agencies said it would be too difficult to implement such a complicated plan, the bill’s co-sponsor, Wisconsin State Assemblyman Evan Goyke, a Democrat, said in an interview.

“I’ll reintroduce it,” Goyke said. “But we have to make some changes.” He is considering restricting use of the savings to higher education.

Savings will not cover the tab

Keystone Scholars of Pennsylvania tells families that if they deposit just $25 a month into a 529 plan account from the time the baby is born, their savings could grow to $10,000 by age 18.

Advocates of children’s savings books say they shouldn’t cover the full cost. Instead, the goal is to convey something elusive: hope and ambition.

“Child savings accounts give people reason to believe they can transform their future,” said William Elliott III, professor of social work at the University of Michigan and author of “Making Education Work for the Poor: The Potential of Children’s Savings Accounts.” ”

Accounts can give young people “tangible hope” — the belief that they are in control of their future, Elliott said in an interview.

Elliott, who grew up in poverty in Pennsylvania, remembers when a father in his troubled neighborhood announced he was saving for his son’s college.

“After that, we all thought differently about that kid. He went to college,” Elliott said.

Similarly, a college savings account “changes the way kids think about themselves and others about them,” he said.

CalKIDS has its roots in San Francisco’s K2C program, which then-Mayor Newsom started in 2011. K2C stands for Kindergarten to College, which opens savings accounts with $50 for every child who enters kindergarten in a San Francisco public school. Children and families receive incentives for their deposits.

“I don’t think anyone imagines that we can fund all the children’s education costs. That was never part of the original idea,” said City of San Francisco Treasurer José Cisneros. “Our program is trying to build aspirations.”

Thailyah Miller is a 17-year-old San Francisco high school graduate with big dreams. She intends to be the first member of her family to go to college – her dream college is the University of Southern California – and to become a medical assistant.

She knows that tuition, fees, and living expenses at USC exceed $85,000 per year (although the school waives tuition for US families with incomes of $80,000 or less), but her grandmother, who adopted and raised her also opened her K2C account, which Miller contributed to. It now has about $500 in savings, she said.

“That doesn’t even pay the fees” at USC, she said in an interview, “but you have to start somewhere.”

Miller’s grandmother died of a heart attack earlier this year and she lives with an aunt. She meets her obstacles with realism.

“I’m grateful for the opportunity for scholarships,” she said, and she may be taking out student loans. “I’ve come too far not to invest in myself.”