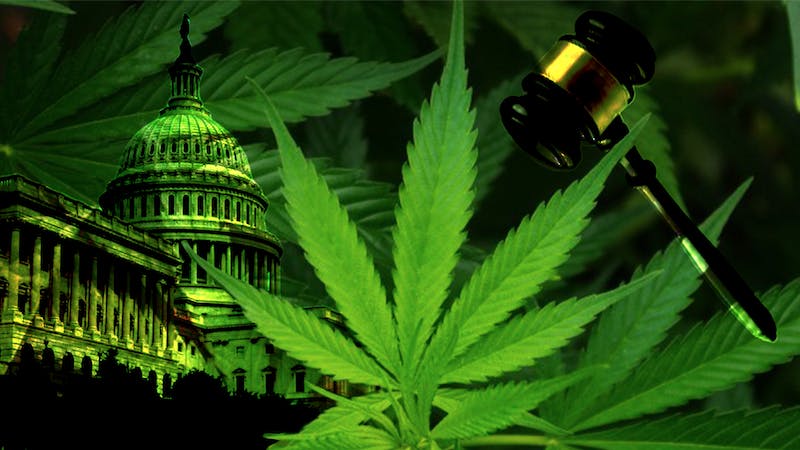 Many human rights were on the ballot this election season, including but not limited to Pennsylvanians’ legal right to smoke some weed. As politicians fought for a majority of the vote, using tactics ranging from accusatory ads to “Darties for Democracy,” the issue of marijuana legalization was overshadowed by the salient issues of reproductive rights and high crime rates. But with the new elect soon to be inaugurated, the future of marijuana legislation hangs in the balance.

Cannabis remains an illegal drug across the state of Pennsylvania, leading to 20,200 arrests for marijuana possession in 2020, suggesting that enforcement of the ban has persisted even amid the COVID-19 pandemic. Arrests continue to be disproportionately concentrated in Black Pennsylvania, who account for 32% of arrests but make up only 12% of the state’s population. At the city level, marijuana has been decriminalized in Philadelphia since 2014, meaning residents are not prosecuted for personal cannabis use, but instead face a fine, subpoena, or community service obligation through civil proceedings. Philadelphia District Attorney Larry Krasner has chosen not to pursue low-scale marijuana possession charges in civil courts, resulting in a 78% drop in marijuana arrests in Philadelphia between 2013 and 2014. Even with relatively low arrest numbers, Black Philadelphians arrest disproportionately 44% of the city’s population but 76% of marijuana arrests. Decriminalization is not enough to prevent the use of police force and incarceration that directly harm black and brown communities.

Earlier this year, Gov. Tom Wolf and Lt. gov. John Fetterman is working to address this disparity through the Pennsylvania Marijuna Pardon Project, which offers a one-step online application for an official pardon for a nonviolent marijuana offense. The project followed Wolf and Fetterman’s tour of all 67 counties of Pennsylvania listening to voters’ views on cannabis issues.

While small strides have been made in Harrisburg in expanding access to cannabis, marijuana activist and political organizer Tsehaitu Abye says it’s imperative that politicians communicate with cannabis advocates to better inform cannabis legislation. Abye commends that midterm elects Josh Shapiro and Fetterman have “actively led these discussions and participated in the work” to understand what the cannabis community needs from their political representatives. The stigma of prohibition leaves users feeling like they can’t talk to their elected officials about marijuana use or use political spaces to advocate for cannabis access and legalization. Abye emphasizes that “choice can help you in your relationship with cannabis. And your access to cannabis. Because it is access to healthcare.”

In Pennsylvania, cannabis has been recognized as a medical tool since the state passed the Medical Marijuana Act in 2016. The legislation launched the PA’s widely successful medical marijuana program, which serves nearly 600,000 Pennsylvanians and provides them with care for 23 qualifying medical conditions from autism to sickle cell anemia. Harrisburg has historically recognized the value of cannabis to Pennsylvania residents, and the new administration must uphold that understanding as it seeks to expand access to marijuana.

Abye is encouraged by Shapiro and Fetterman’s previous work in working with cannabis advocates, but also expects them to “make sure we have diverse stakeholders representing the Pennsylvania community, particularly those who are black and from the… drug wars are particularly affected.” While legalization remains the ultimate goal on the horizon, it is important to Abye that the cannabis community heal from the damage done to it by the criminalization of thousands of people. This criminalization is not just forcibly removing individuals from their communities, but also stigmatizes them as criminals for the rest of their lives.The “amount of organized power, organized money, and organized people” gives politicians the power to speak for those who have been silenced by bans.

Politicians must work towards destigmatizing cannabis use as well as expanding access and fighting for legalization, as stigma prevents users from speaking up for themselves and building a strong community.

Senate-elect Fetterman dedicates a page on his website to his policy goals around access to marijuana; the site itself states Fetterman’s ultimate goal for cannabis policy. He expresses concern that “people who legally use this plant in their homes may still be denied government employment,” and points to the government’s systematic discrimination against marijuana users. As a senator, Fetterman will be able to advocate for access to cannabis at the federal level and work to change the drug’s status as a Schedule 1 substance and expand access across the country. During the election campaign, Senate candidate Mehmet Oz took to Twitter to criticize his competitor’s promotion of cannabis legalization, posting a crude video of a bong emerging from Fetterman’s head.

Fetterman is also trying to “prevent the monopolization of this new industry,” as does Abye through her marketing company, Black Dragon Breakfast Club. Abye narrows her clients down to BIPOC women interested in cannabis entrepreneurship to redefine how people of color engage with cannabis, moving from a narrative of crime to one of ownership and agency. BLBC’s stated mission is to change perceptions of cannabis and “take control of the hemp and cannabis industry.” Big companies are already beginning to overtake the state’s burgeoning cannabis industry, with one company building 21 medical marijuana dispensaries across the state. As is common in large corporations, executives at these corporations are typically white males, with the exception of the demographic Abye is working to raise.

Despite the will of the governor and the state’s elected senators for legalization, many still doubt that legalization is anytime soon for Pennsylvania. Although six out of 10 Pennsylvania voters support legalizing marijuana, the issue still lacks bipartisan support in the state Legislature, as some Republican lawmakers remain opposed to the law. On the other hand, the choice of Shapiro, who has publicly his goal of legalizing marijuana and repairing the harm caused by prohibition laws bodes well for the future of cannabis policy.

Making medical marijuana easier for people to access is good.

Even better is legalizing recreational marijuana, erasing the criminal records of those accused of possession, and righting the wrongs experienced by our black and brown communities.https://t.co/sqTRAvkRbF

As governor, Shapiro will have the power to propose legislation to support expanding access to cannabis, as well as significant scrutiny over state spending on the medical marijuana program and any new initiatives. The new government is showing its commitment to an open conversation about cannabis, but that conversation needs to include a broad spectrum of cannabis advocates, not just those in control of market share.