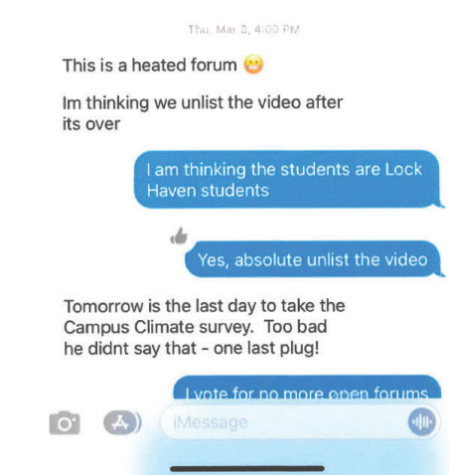 Back in March 2022, a Pennsylvania State System of Higher Education (PASSHE) open forum at West Chester University was “heated up,” according to university officials who decided to remove the YouTube video of the discussion from the listing. Since then, however, Pennsylvania state law enacted by WCU alumni has required hidden information about the forum to be released to the public, prompting students to take to social media and voice their troubles with PASSHE’s economic situation.

On March 3rd this year, Daniel Greenstein, Chancellor of PASSHE, came to West Chester University to host, among other things, an open forum. Covered by The Quad in March, the forum allowed Greenstein to speak out on various PASSHE initiatives, while being primarily a platform for student visitors to question and comment on PASSHE’s work to date. Student questions focused primarily on finance, with the idea of ​​a clearly limited, if not free, cost of public higher education being desired by a majority of the audience.

The students’ financial commentary included the notion that “a large part of the [student] Equity gaps are that [schools] Raise tuition,” and a student citing an earlier Greenstein notion that “college education is not an entitlement.” Many students even came to the forum with cardboard signs listing their student debt levels. Greenstein countered these ideas by stating that he “does nothing to advocate for a free college” since there had never been “an initiative for a free college”. [in Pennsylvania] that was successful.”

His answers were immediately followed by a heated argument, with one student immediately asking aloud why Greenstein “[doesn’t] fuck it all [them]’ and another told the Chancellor that ‘the funding is there’ to save them and what they are going through ‘breaks their hearts’. In the coming hours, the event’s public stream on YouTube would go from privatized to unlisted, with minimal social media attention given to the fact that the forum had taken place in the first place.

These events have come and gone, but have recently resurfaced due to student actions. PASSHE Defenders is a social media presence run by former West Chester students with the intention of “fighting for a fully funded state system… and against the PASSHE consolidation”. After the forum closed, defense attorneys were able to enact the Right-to-Know policy, a Pennsylvania state law that allows “requests for public records from the Office of the Chancellor” among many other government and educational groups, meaning all students Those curious enough about the March Forum in March could request that all related information be made available to the public. This turned out to be the aim of West Chester graduate Nicholas Marcil. Marcil would later create the PASSHE Defenders. He saw that his request for access rights was only granted earlier this month, giving him access to forum video links, forum-related emails and even text message conversations between WCU officials regarding the forum’s events. 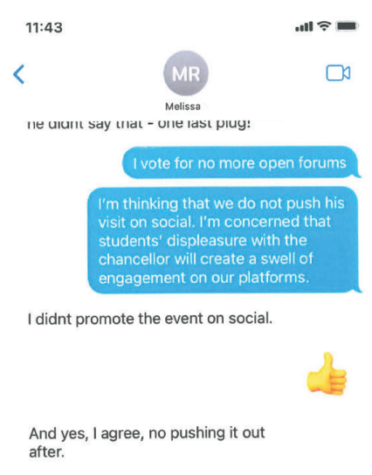 These disclosures resulted in the PASSHE Defenders group immediately taking to Instagram, Facebook and Twitter, posting the information they found and using it as the basis for reform action on PASSHE, including the Board’s voting recommendations. We spoke to Marcil about the reduced volume this forum was seeing in public. “It upset me and so many others,” he told us, “a lot of people probably weren’t surprised in a way, they don’t want to show those things and [the] The chancellor doesn’t bother to really talk to the people.”

The aforementioned text messages between WCU communications officials indicated that the forum’s downsizing was largely intentional. In a conversation between Nancy Gainer, senior associate vice president for University Communications and Marketing at West Chester, and Melissa Rudolph, director of digital and social media, Gainer told Rudolph that the forum should not be pushed to social media and that ” Students are dissatisfied The chancellor will ensure a wave of engagement [their] Platforms.” Rudolph’s text responses confirmed that the forum was “heated up” and that his video is unlisted on YouTube and the event is not being promoted on social media.

When asked about those comments, Gainer told the Quad that her social media actions strive for “civil and respectful engagement,” as that’s the “most productive engagement on any platform.” Gainer also said in her lyrics that she votes for “no more open forums.” When asked about it, she told the Quad that she was “in favor of open forums where ideas are shared in a civil and respectful manner.”

This forum has at least shown that there is disdain for current PASSHE financial strategies. Gainer reported that groups like the PASSHE Defenders “had no effect on that [her] Efforts.” Feelings like hers continue daily, however, with the PASSHE Defenders Twitter consistently citing the forum video and asking if Dan Greenstein “will ever come up with a real answer to the student debt crisis.” That forum conversation seemed to follow Greenstein to Shippensburg University as well , where The Slate News reported in an April 5 article that the conversation in a similar open forum “focused largely on the PASSHE budget.” Overall, there’s still a lot to see in terms of student finances, but the Nevertheless, discussions about it seem to be increasing.

M. Bordeaux is a fourth-year history major with a journalism minor.