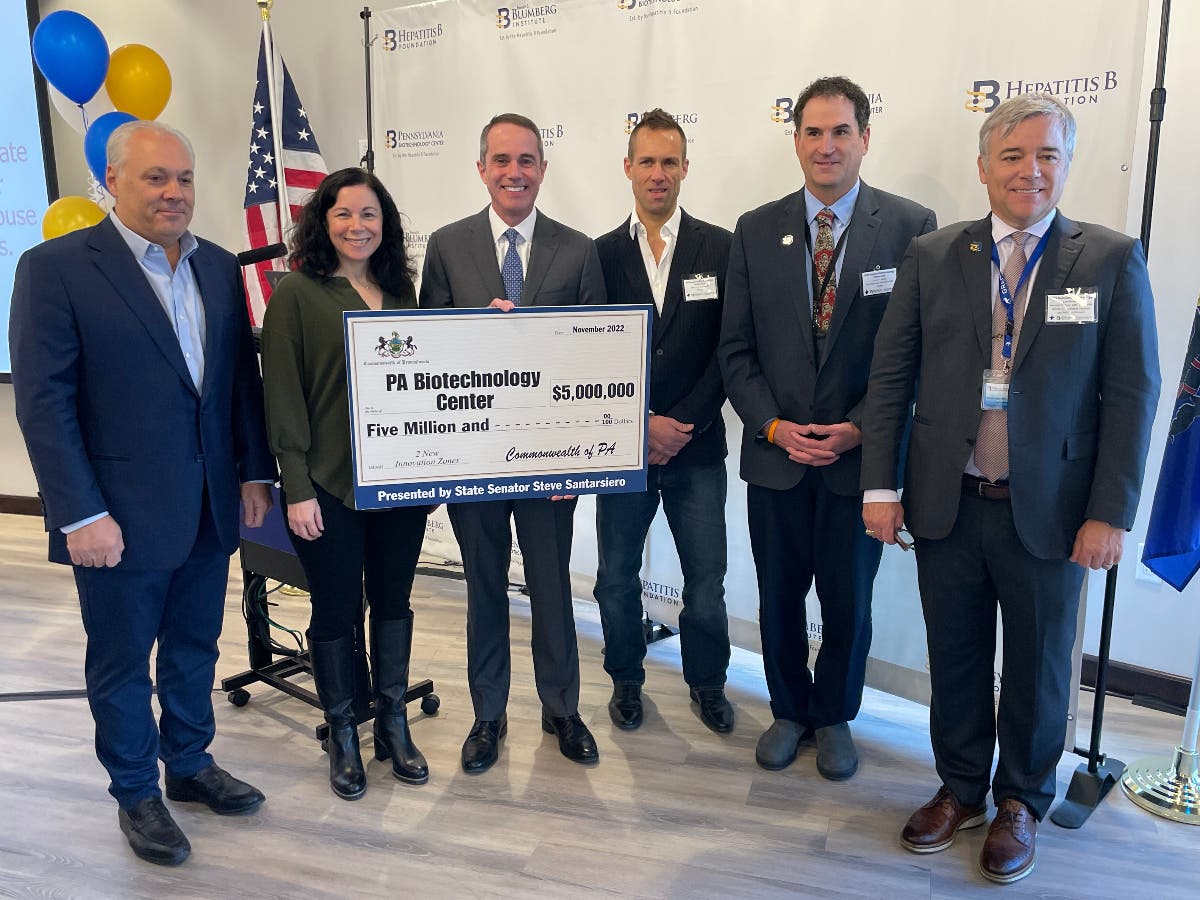 DOYLESTOWN, PA – Pennsylvania will invest $5 million in a new academic innovation zone in Bucks and Philadelphia counties through the Pennsylvania Biotechnology Center.

The announcement was made in Buckingham Township by State Senator Steve Santarsiero and the CEOs of the nonprofit Pennsylvania Biotechnology Center and the Brandywine Realty Trust.

Funding will be split equally between PABC’s two life sciences incubators — its headquarters and original incubator in Buckingham and at B+labs at the Cira Center in Philadelphia. B+labs is operated by PABC in partnership with Brandywine Realty Trust.

More than 100 companies, mostly small to medium-sized scientific, research and pharmaceutical companies, are PABC member companies. Nearly 50 have operations at the Bucks County facility and 15 are located at B+labs.

“Not only will this significant grant allow us to expand our services to help promising companies grow, it is a significant statement of confidence in the PABC by some of the highest elected officials in the state,” Louis P. Kassa III , MPA, President and CEO of PABC said. “The Pennsylvania Biotechnology Center has created thousands of new jobs and generated more than $10 billion in economic impact over the past 16 years, and the Academic Innovation Zone will greatly enhance and accelerate our efforts.”

Biotechnology investments of the kind announced this week will help transform Pennsylvania’s economy, according to Santarsiero.

“We have the opportunity to build a biotech corridor that starts right here in Bucks County that connects to other hubs throughout Pennsylvania and allows us to compete with other states and countries in this industry,” he said. “This is an important investment, but as a state we have a lot more to do.

“I know that[expanding the biotech industry in Pennsylvania]is a specific goal of Gov.-elect Josh Shapiro. And I and my colleagues look forward to working with him as he lays out that plan for the future. I’m really excited to see what will develop over the next few years. Pennsylvania is becoming a critical place where investment and growth in this industry will result in great things, both for our residents here and for the wider region.”

Kassa also expressed appreciation to Jerry Sweeney, President and CEO of Brandywine Realty Trust, for playing a key role in developing the concept of the PABC’s Academic Innovation Zone.

“The Commonwealth of Pennsylvania has a tremendous opportunity to accelerate this moment of rapid growth as a premier life sciences market,” said Jerry Sweeney, President and CEO of Brandywine Realty Trust. “This commitment at the state level allows us to implement a key program that will not only bring more business and talent to the area, but will keep them here and promote the Philadelphia area as the best place to build and grow a life- science company.”

The Academic Innovation Zone program will provide turnkey lab and business services available to entrepreneurs or start-ups with promising ideas but limited resources for quick exploitation.

The program has three specific objectives:

“Pennsylvania has a clear need for this type of initiative,” officials said. “The state ranks 4th nationally for patents and 5th in the country for funding to the National Institutes of Health, with 88 universities and colleges within a 50 mile radius of Philadelphia.

However, a 2019 report by the Pennsylvania Department of Community and Economic Development shows that Pennsylvania has “continuously fallen behind those states that have steadily increased their support for entrepreneurship and technology-based economic development initiatives.”

Funding for PABC’s Academic Innovation Zone (AIZ) is a year-long pilot grant from the Pennsylvania Department of Health totaling $5 million. Most of it goes to the company’s personnel, especially to science and management. The grant will also fund equipment, consumables, and services at the two sites.

The AIZ plan intends to accelerate early-stage companies and technologies through the highly successful model of the PABC. The goals are both scientific progress and economic development.

PABC’s Doylestown campus, which opened in 2006, includes a two-story building that was completed late last year and features new laboratories, conference rooms, offices and a function space. The PABC received more than $9 million in grants from federal and state agencies for the expansion.