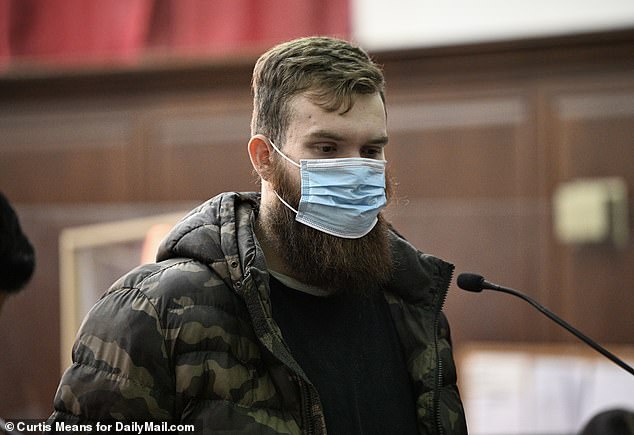 New details have emerged about the arrest of the two men who attempted to attack synagogues in New York City.

Christopher Brown, 21, was recently arrested along with alleged co-conspirator Matthew Mahrer, 22, over their plots to attack members of the Jewish community in New York.

The two were in possession of a gun, a “large capacity” magazine, ammunition, a “military-style” knife and Nazi memorabilia at the time of their arrest Manhattan District Attorney Alvin Bragg.

Christopher Brown, 21, was on trial Sunday after being arrested for plotting attacks on synagogues in New York 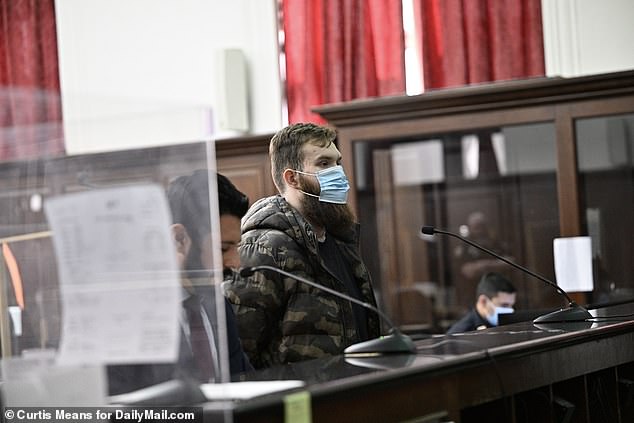 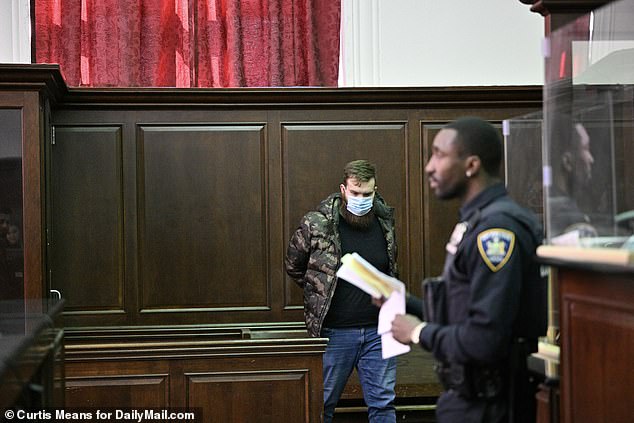 The couple had met outside St. Patrick’s Cathedral on Friday before finally being stopped with the gun, a 9mm Glock they allegedly bought in Pennsylvania for $650.

Assistant District Attorney Emilio Hernandez said Mahrer and Brown even traveled to Pennsylvania together for the sale and “intended to use it in a synagogue attack.”

The FBI/NYPD task force first became aware of threats to the Jewish community Friday night and “acted quickly to gather intelligence, identify the individuals behind them, and operationally neutralize their ability to cause harm,” the NYPD commissioner said Keechant Sewell in a statement.

In a criminal complaint obtained by the New York Post, Brown allegedly told police he had a “sick personality” as he pushed for the assaults and the gun.

“I wanted to be a coward and blow my brains out with it,” Brown allegedly told police after his arrest.

Brown previously posted a message on his social media page on Thursday, allegedly saying, “I’m going to ask a priest if I should become a husband or shoot a synagogue and die.”

The 21-year-old also told police Mahrer was “a supporter” of his. 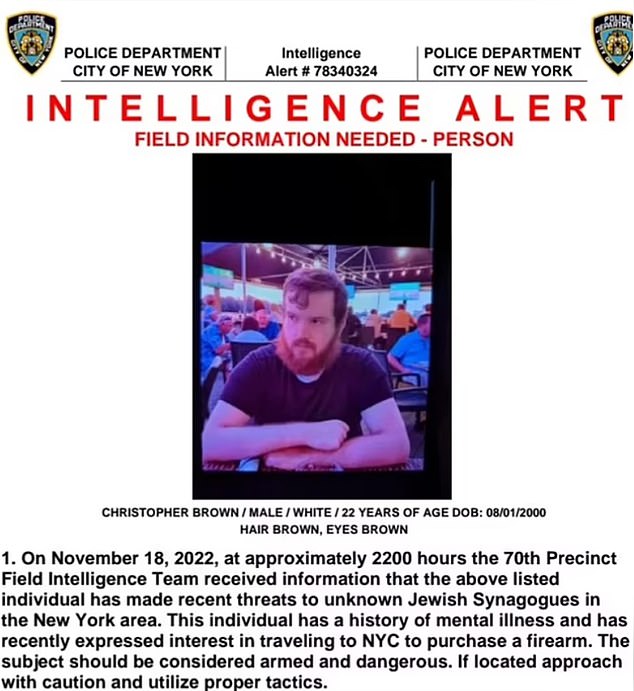 This is the poster the FBI released of Brown asking for the public’s help in locating the man with a “history of mental illness.”

“It took me three years to finally buy the gun. Matt is one of my followers. I have Nazi paraphernalia in my house. I think it’s really cool,” Brown allegedly told police, according to the complaint.

The man had been on police radar after sending ominous and alarming tweets, including an alleged post saying he was making “big strides” on Friday.

Police say he later posted on his social media account: “I’m really going to do it this time.” 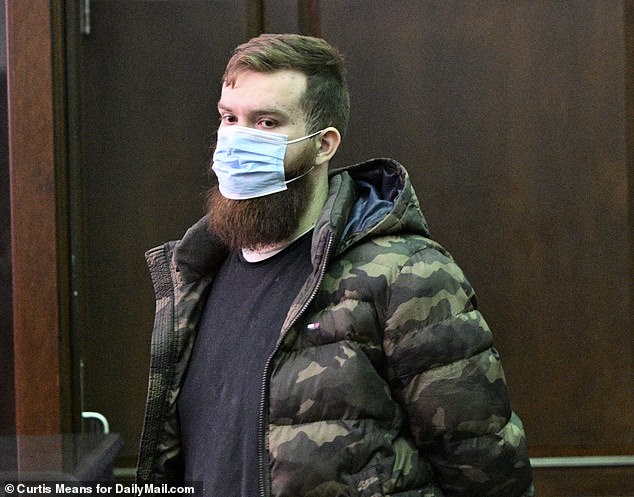 Brown was charged with terrorism threats and weapons possession

The accused also reportedly released a video of himself saying he was going to “brutally murder people with cleavers and stuff.”

After their arrest, the police found a gun and a bulletproof vest in the home of Mahrer’s parents, with whom he lived.

“Hateful anti-Semitic attacks on synagogues are deplorable,” Bragg said. “The Manhattan Attorney’s Office will now seek accountability and justice in this case with the full resources of our Counter-Terrorism Problem and recently strengthened and expanded Hate Crimes Division.”

In addition to terrorist threat charges, Brown faced six gun possession charges. He is being held without bail. 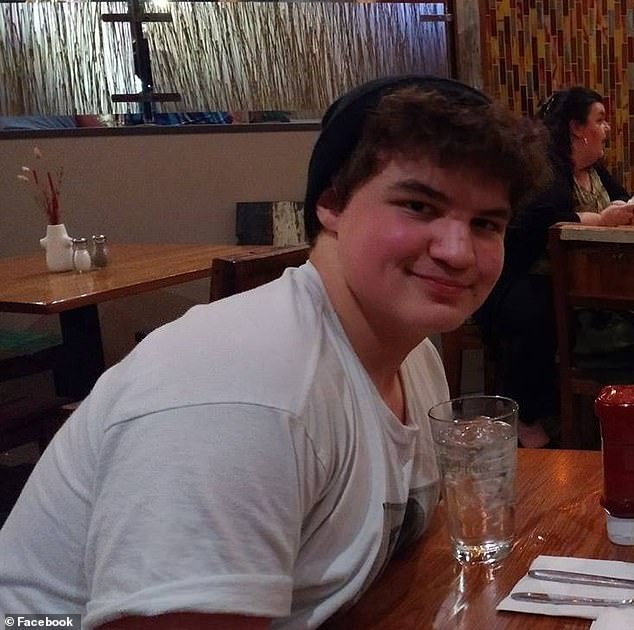 Matthew Mahrer, 22, has been charged with criminal gun possession and is being held on $150,000 bail

During his arraignment on Saturday, his attorney Brandon Freycint said the 22-year-old has oneUtism, bipolar disorder, anxiety and ADHD, according to one outlet.

Mahrer’s lawyer also said the man was “of Jewish descent” and that his own grandfather was a Holocaust survivor.

“My client is of Jewish descent. He lives with his parents and his grandfather is actually a 93-year-old Holocaust survivor — and my client is his part-time caretaker,” Freycinet told the court.

The attorney claimed that Mahrer should not face possible charges related to a hate crime because of his heritage. 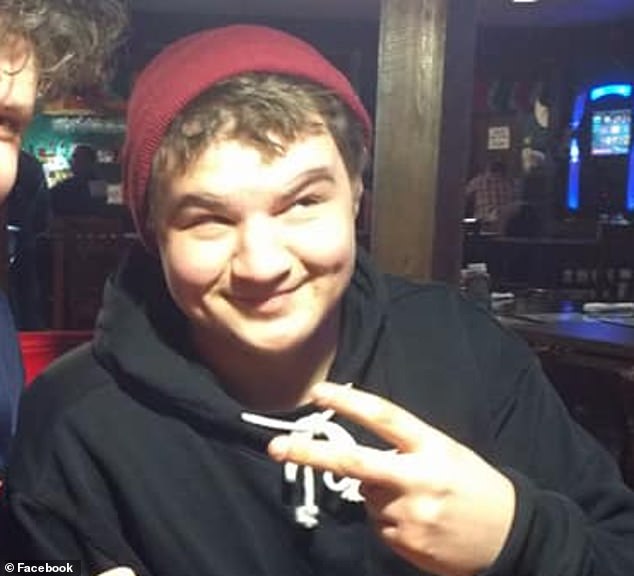 Freycinet said Mahrer spent time on it homeless shelters before moving back to his parents’ home on the Upper West Side a year ago, and that he had no criminal record.

Mahrer’s parents were present at his arraignment on Saturday and claimed that this is not the person they know of their son.

“He’s not what they say,” Mahrer’s mother told the Post on Saturday outside the Manhattan courtroom.

He is expected back in court for his next hearing on Wednesday. 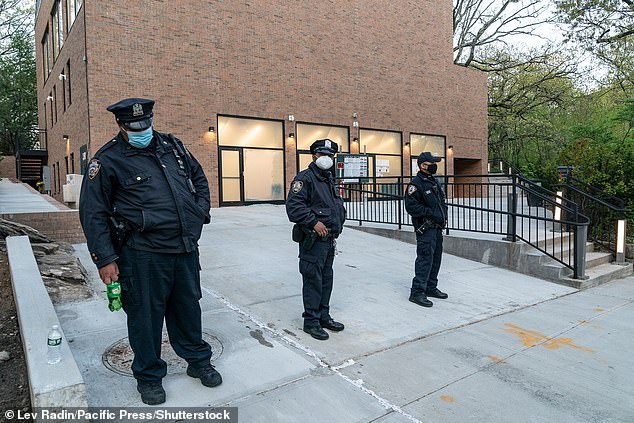 In 2021, the Anti-Defamation League identified more than 2,700 incidents of anti-Semitic behavior nationwide.

That number marked a staggering 34 percent jump from 2020.

In an interview with PBS earlier this year, Anti-Defamation League CEO Jonathan Greenblatt said it was a disturbing statistic.

“This is the highest total we have ever recorded in more than 40 years of this work. And we should consider that anti-Semitic acts in the United States have been declining for almost 15 years, and then in 2016 they started to increase.

“And we’re now at the point where we have nearly three times as many incidents today as we had in 2015.”