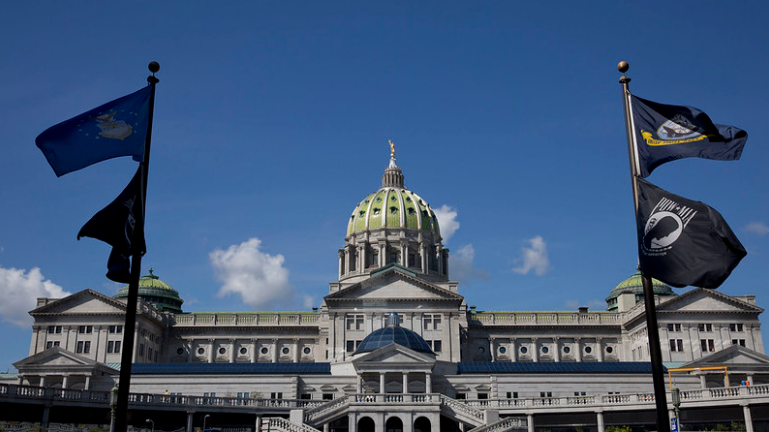 When Senate Majority Leader Kim Ward made comments after becoming the first woman to be unanimously elected senior member of the upper chamber this week, she stressed that she would be working across the aisle to draft legislation that would benefit all Pennsylvanians.

Principle and respect for government and the Commonwealth should be at the heart of her work in the General Assembly, Ward, R-Westmoreland, told her peers as she addressed the Senate.

“We changed some things and did our best, and we did it bipartisanly,” Ward, who is on track to become the next Senate president pro interim when lawmakers return in January, later said during a news conference. “And we all have to acknowledge that, and we have to continue to work in this way for the next few years.”

She cited the increase in education funding, the Educational Improvement Tax Credit Program — which awards state students scholarships to attend private schools — and a reduced corporate income tax as “big steps for Pennsylvanians.”

On January 3, the Senate will formally elect a pro tempore president to serve during the next two-year term. The chamber will also swear in new members — five Republicans and one Democrat — to their four-year terms.

Since Democrats and Republicans in the GOP-controlled chamber announced new leadership teams this week, their policy agendas and goals have varied.

Here’s a look at what each caucus has identified as their priorities as lawmakers enter the 2023-24 legislative session:

Speaking to reporters alongside Sen. Joe Pittman, R-Indiana, the next majority leader, and other newly elected officers, Ward summarized their goal of stopping proposals that “we think are bad for Pennsylvanians.”

“But we can do things that help our economy,” she said.

Pittman, who will control the agenda for the Legislature as Majority Leader, said GOP caucus members would “work across the aisle when necessary” but “defend the principles and beliefs of those who have elected us to serve them.” “.

As the majority party, Republicans control which legislation requires committee and chamber votes.

Ward identified strengthening the economy and supporting working families as bipartisan issues, and said lawmakers have already proven it.

The proposal includes a language for voter identification, a system for election scrutiny, a provision allowing gubernatorial nominees to select their running mate, and a measure allowing lawmakers to oppose regulations without subject to a governor’s veto. It also has language that would change the state’s constitution from guaranteeing no right to an abortion or public funding of the procedure.

The package of amendments, which could reach voters as early as May 2023, must pass the legislature at the next session using identical language and be announced by the State Department.

While Ward did not comment on every component included in the Senate bill, she said voter identification was “an important constitutional change,” citing polls showing support for the requirement. She added that Senate leadership is ready to discuss the proposed changes with Democratic Governor-elect Josh Shapiro.

Legalizing cannabis for adults isn’t high on Ward’s agenda, she said, saying she doesn’t think it’s worth discussing until the federal government legalizes it.

“We’ll see if that changes,” Ward added, referring to Senator-elect John Fetterman of Pennsylvania, who is working to legalize adult-use cannabis. “That was one thing he talked about all the time.”

In the clip, Costa reiterated Senate Republicans’ emphasis on investing in education and supporting working families.

Costa added that Senate Democrats look forward to working with the new Democratic administration and House Democrats, who are expected to gain control of the lower chamber to advance their agenda.

“I look forward to working with our Chamber and the Governor’s Mansion to work on legislation that will make a huge difference in the lives of working families,” Costa said.

Report a correction by email | Editorial standards and guidelines